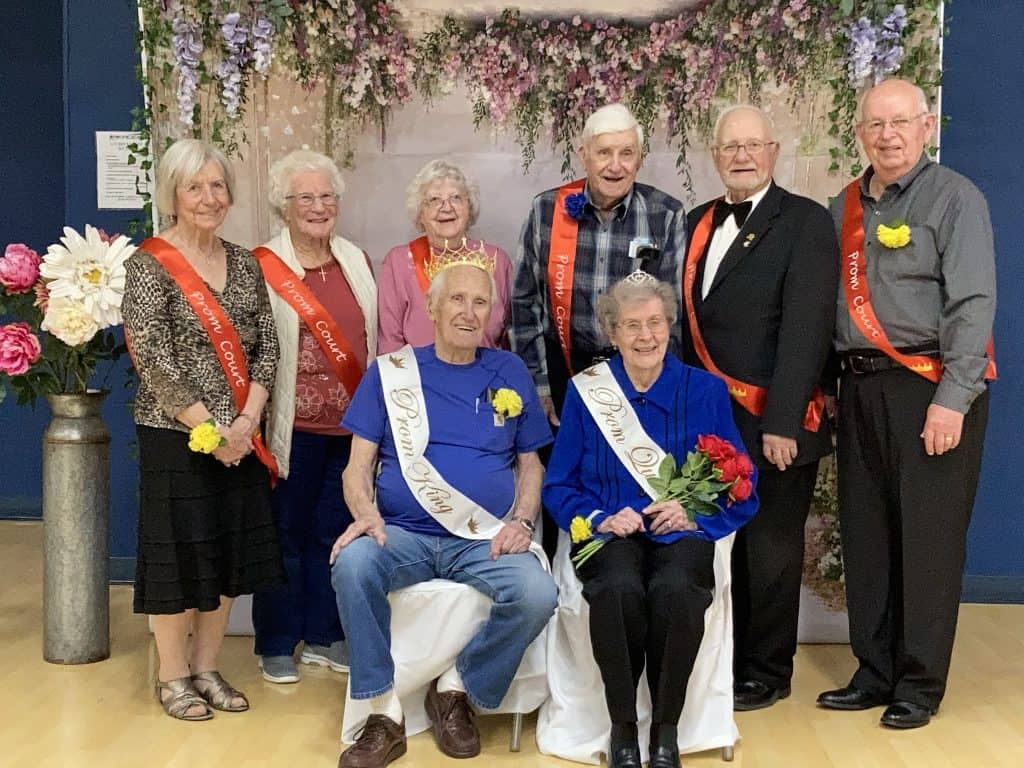 On Saturday, May 1, about 50 senior citizens gathered at the Replex in LeRoy for the 4th Annual Living Well Senior Prom.

After having to cancel the 2020 Senior Prom because of COVID-19 restrictions, attendees were eager for the chance to gather and socialize after receiving their vaccinations earlier in the spring, said Barbara Whiteman, director of Living Well United. “After the year we’ve had, this prom is much needed for these seniors,” said Whiteman, who wore a purple prom dress with pixie wings.

Whiteman and her group of volunteers went all out to present a prom experience. View photos and videos from 2021 Senior Prom.

The theme this year was Enchanted Garden. All women attending received a flower corsage and the men received boutonnieres. A photo booth, run by Jenni Sevik and Carol Pfoff, captured photos in front of the photo booth fence made Kevin Pfoff. Each prom attendee received a commemorative photo to take home.

Dinner was catered by Carolyn and Emma Jent and served by LeRoy High School Key Club sponsor Kim Wolwend and seven club members. Cupcakes and cookies made by Whiteman completed the meal.

DJ Bob Shull provided a great selection of music as attendees danced. The most popular dances of the evening were the line dances, led by Debbie Epperson, who taught them to the group at the Senior Center the previous week.

Living Well United, which opened its Senior Center in LeRoy in July 2020, works to reduce isolation of seniors in LeRoy, Ellsworth, Bellflower, Arrowsmith and Saybrook by helping them build strong social networks of care, and keep their minds and bodies in the best shape possible to encourage aging successfully in their own homes and communities.

If you would like to help fund more programs like this in the community, donate online to IPCF’s Annual Campaign which funds the General Grants.