PAST PHILANTHROPISTS OF THE YEAR

The Harmons are exemplary role models for civic leadership and philanthropic contributions in our community. Their time and talents dedicated to the community extend more than four decades and continue today. 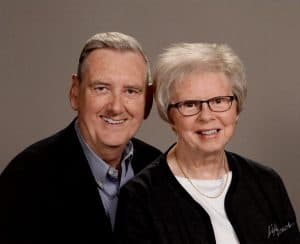 Paul has been involved in local government for more than four decades, over the years serving on the Normal Planning Commission, Normal Town Council and then as Mayor, McLean County Regional Planning Commission, Illinois Municipal League Board and Bloomington-Normal Airport Authority Board.The Harmons moved to Bloomington-Normal in 1968 when Paul began work as an attorney at Illinois Agriculture Association. He retired as General Counsel and Corporate Secretary for Illinois Agriculture Association (Illinois Farm Bureau) and COUNTRY Financials in 2008. Sandra retired from the Department of History and Women Studies program at Illinois State University in 2004.

Paul served on the board of Illinois Prairie Community Foundation from 2008-17, serving on various committees during that time and as president from 2016-17. He was re-elected to the board to fill a vacant term in August 2018 and again served as president through June 2019.

Paul and Sandra are members of First Presbyterian Church, Normal, and have served on various committees with the church.

As a couple, they were named 2018 History Makers by McLean County Museum of History and 1993 Normal Citizens of the Year. Paul was named 2015 Extraordinary Man of the Year by Collaborative Solutions and received the Illinois Farm Bureau Eagle Award for Excellence and League of Women Voters Award for Civic Service, both in 2007. Sandra was named 2006 Woman of Distinction in Creative Arts and Entertainment by YWCA McLean County and received a 2000 Outstanding University Teacher Award and 1996 League of Women Voters Award. 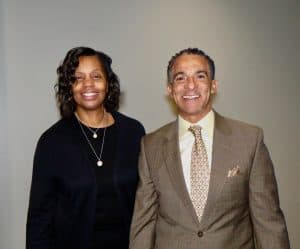 The Farringtons exemplify the spirit of philanthropy through their involvement in, and support of, numerous community organizations during the 14 years they have lived in our community.

Duane Farrington is Executive Vice President – Technology, Digital and Innovation for State Farm Insurance. He began his career with State Farm in 1980 in Pennsylvania, moving to Bloomington for the first time in 1988. The Farringtons relocated and returned to the community many times, most recently returning in 2009.

Duane is very involved with the Boys & Girls Club of Bloomington-Normal. He serves as chairman of its “Community Advisory Council,” meeting quarterly with local community leaders to update them on happenings at the Club; volunteers most Wednesday nights as part of the “Passport to Manhood” program; and chaired the Club’s annual fund drive campaign and fundraising breakfast in 2015. He also is a current member and past Member of the Year of the 100 Black Men of Central Illinois and The Congressional Black Caucus Foundation. A member of several state and national groups, Duane is also a board member of Heartland Jazz Orchestra locally.

Duane and Toni Farrington co-chaired a capital campaign for The Community Cancer Center during the latest addition to build a new tower for the patients and their treatments. The Farrington family are active members of Eastview Christian Church in Normal. Duane is an usher, greeter and leader of the Monday Night Men’s Bible Study Fellowship and Toni volunteers in the pantry at least two mornings a week.

Toni Farrington is a member of Western Avenue Community Center’s board of directors and volunteers as a mentor twice a week during the school year with the PETALS (Providing Education & Training to Achieve Lasting Success) program. She recently served on the search committee for a new executive director of the Boys & Girls Club of B-N and currently is a member of the Promise Council at Oakdale Elementary School in Normal, serving on the Back to School Basketball Jamboree and Educational Summit committee.

According to their nominator for the award, “Duane and Toni together have developed close personal relationships with many of us over the years, working very closely, diligently and quietly on many philanthropic endeavors in our community." 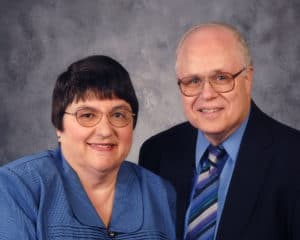 George and Myra Gordon exemplify the spirit of philanthropy through their involvement in, and support of, numerous community organizations during the more than 45 years they have lived in Normal.

Myra helped to found Operation Recycle (the precursor to today’s Ecology Action Center), serving as its Executive Director when it became the full-time recycling center for McLean County, and is currently a “board member in perpetuity.” She was Co-President of the McLean County League of Women Voters, board member of the Multicultural Leadership Program and member of the Bloomington/Normal-Asahikawa Sister Cities Committee. A past member and Vice President of the Illinois Prairie Community Foundation board, Myra volunteered to serve as interim Executive Director in 2007. She was named permanent Executive Director in 2008 and served in that role for more than six years. Achievements during her tenure include the Women to Women Giving Circle, Youth Engaged in Philanthropy and increasing IPCF grants from $12,000 a year to more than $200,000 annually.

George is a retired Professor of Politics and Government at Illinois State University, where he taught for 38 years. He has been a member of the McLean County Board for 20 years, chairing its Land Use & Development Committee for 16 years, and currently chairs its Justice Committee. He also has served with Cedar Ridge Elementary School Promise Council, the Unit 5 Diversity Advisory Committee, the Board of Compassion and Choices, and Moses Montefiore Temple, where he is a Past President and has served as Choir Director for more than 30 years.

Believing in the power of endowments to create a secure future for Central Illinois, the Gordons have created two endowment funds:  the George J. Gordon Scholarship in U.S. Public Affairs at ISU and the Gordon Performing Arts Fund at IPCF, which provides annual gifts to Heartland Theatre and the Illinois Symphony Orchestra. 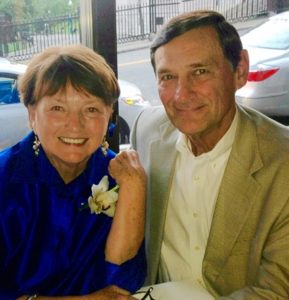 Darrell and Donna Hartweg have been active in many organizations since moving to Bloomington in 1968. Darrell served on St. John’s Lutheran Church’s Charitable Trust board for 25 years, including six years as its chair. Other leadership positions include the University of Illinois YMCA Board of Trustees where he was chair for 13 years, Illinois Prairie Community Foundation, where he served on the board for nine years including four as its president, and the Community Cancer Center’s Board of Governors since 2009, serving as its president from 2013 to 2015. He is a member of IPCF’s development committee and the Downtown Bloomington Association. Darrell is a partner at Hartweg, Turner, Wood & DeVary Law Firm in Bloomington. A long-time member of the McLean County Bar Association, he received the Association’s Lincoln Award of Excellence in 1999.

Donna is a Professor Emerita of Illinois Wesleyan University where she served as Director of the School of Nursing from 1990 to 2009. She was appointed by the governor in 2006 to the Illinois Center for Nursing Advisory Council that recommends policy on nursing workforce resources.  Donna has been president of several boards including BroMenn Hospitals Board (now Advocate), Community Health Care Clinic, Illinois Association of Colleges of Nursing and the regional Illinois Nurses’ Association. She is currently vice chair and head of strategic planning for the John M. Scott Healthcare Commission. In addition she reviews grants for several organizations including the Women to Women Giving Circle at IPCF where she is a founding member. 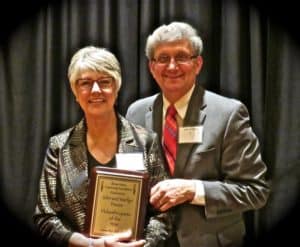 Marilyn is a Founding Member of the Women to Women Giving Circle and serves on IPCF's Shulman Grants Committee. She volunteers at the Loaves and Fishes Soup Kitchen, the Normal Theater, Crossroads Global Handcrafts, and local public schools. She is a Master Naturalist with the University of Illinois Extension program and serves on its Advisory Council.

The Freeses donate generously to many organizations including Advocate BroMenn, Community Cancer Center, Illinois Symphony Orchestra, McLean County Museum of History, WGLT, and the Illinois State University Foundation where, among other gifts, they established an endowed scholarship. 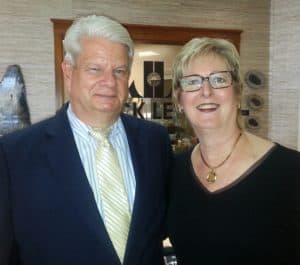 John and Jan have held key leadership positions with Illinois Symphony Orchestra and its Guild, including John's service as President of the Symphony. They have supported American Red Cross' Evening of Stars since its inception 20 years ago, serving as co-chairs of the event in 2004. Jan is a Founding Member of the Women to Women Giving Circle at Illinois Prairie Community Foundation. John is a Founding and Charter member and past President of Bloomington-Normal Sunrise Rotary Club, has been active in McLean County Chamber of Commerce, and has served as the Director of Organizational Development for Boys and Girls Club of Bloomington-Normal. 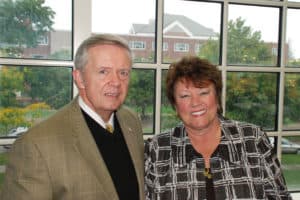 Since moving to Bloomington-Normal in 1988, Bob an Julie have been actively involved in leadership in a variety of local organizations and have positively impacted the community. Julie is a Founding Member of the Women to Women Giving Circle at Illinois Prairie Community Foundation and served as board Chairwoman of United Way of McLean County. The couple served as honorary Chairmen of The Baby Fold's 2013 Festival of Trees and both have served as President of McLean County Chamber of Commerce. 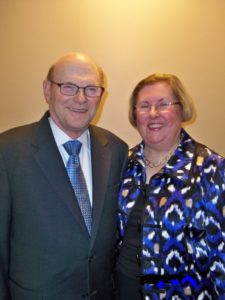 Roger and Mary have established wonderful traditions of giving to our community since their arrival in 2001 and have been involved and supported many community organizations. Mary is an active Founding Member of the Women to Women Giving Circle at Illinois Prairie Community Foundation. The couple has served as Chairmen of American Red Cross of the Heartland Evening of Stars. Roger is a past board Chair of Illinois Symphony Orchestra and chaired the Symphony's Music Director Search Committee.

Other organizations that have benefited from the couple's leadership and philanthropy include Advocate BroMenn Medical Center, Bloomington Kiwanis Club, Illinois State University Community Partners, Mennonite College of Nursing, the McLean County Chamber of Commerce, and the United Way of McLean County. 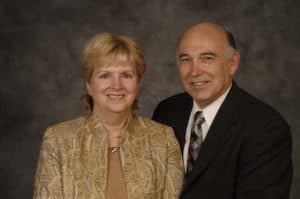 Deanna and Alan have given many years of service and philanthropy to a wide range of organizations throughout our community. Deanna's involvements include Leadership McLean County, United Way of McLean County, McLean County Chamber of Commerce, Community Health Care Clinic, Multicultural Leadership Program, The Baby Fold, Humane Society of Central Illinois and Illinois Prairie Community Foundation. She is a Founding Member of the Women to Women Giving Circle at Illinois Prairie Community Foundation and served on its Steering Committee.

Alan has served the local Cornbelt AMBUCS organization for over 20 years. He is a past Vice President of the Occupational Development Center and past board Chair of LifeCil. He volunteers at Midwest Food Bank. The couple has served as Chairmen of Red Cross Evening of Stars and Miller Park Zoo Do fund raisers. 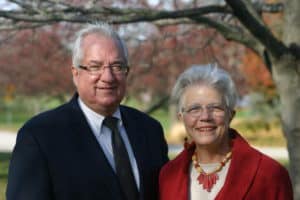 Jerry and Carole have the distinction of being the First Philanthropists of the Year to be honored at the annual Celebrating Local Philanthropy Luncheon in November. The Ringers are life-long philanthropists whose generosity of time, treasure, skill, and enthusiasm touch our community, our state, and our world.

Jerry has served as board Chair of Illinois Shakespeare Festival Society and Senior Professionals at Illinois State University. He serves on the Development Committee at Illinois Prairie Community Foundation. Jerry served nine three-year terms on Cornell College's (Iowa) board, including one as its President, and was honored by the college for a lifetime of service and giving. A retired ophthalmologist, Jerry has donated his medical services on several trips to Africa.