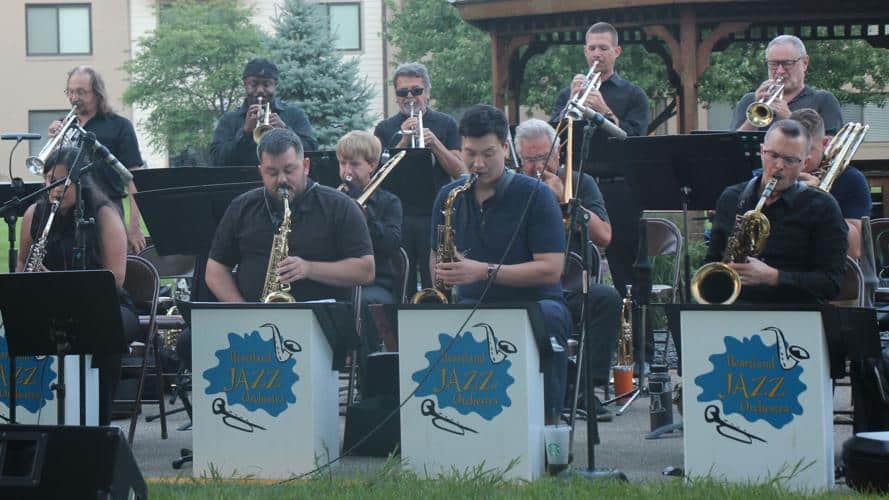 Story and photos by Brendan Denison

BLOOMINGTON — Care to hear some “cha-cha” outside the old courthouse in Bloomington?

The Heartland Jazz Orchestra will perform a pop-up concert Friday night (Sept. 2, 2022) on Center Street, just outside the McLean County Museum of History in downtown Bloomington. As of midday Wednesday, the weather forecast for Friday was sunny, so the songs should be swinging.

The nonprofit HJO Foundation has been putting top-notch musicians on Twin City stages for decades, covering arrangements from modern to early eras of jazz. Lead trumpeter Myles Singleton, of Normal, said some of his bandmates have performed around the globe.

That includes band leader David Hoffman, who continues to recover at home after a several-month stay at a hospital. He was previously part of the Ray Charles Orchestra, and plans to attend the Friday show.

Although 2020 was a bust for the 20-member group, Singleton said they’ve started getting back together and adding new dates to the band calendar. Their most recent concert was Aug. 21 at Westminster Village in Bloomington. Before that, they played live at the Normal Theater last November.

Singleton emphasized they’ll have a regular rotation of pop-up concerts, which are sponsored by the Illinois Prairie Community Foundation and its Mirza/Arts & Culture Grants. He added these shows are “just a way of saying thank you to the community by giving back free concerts and giving more exposure to jazz.”

The grants have also helped the band bring in guest performers from near and far, such as: Cuban pianist Chuchito Valdés, a five-time Grammy winner who joined in with HJO in 2013, 2011 and 2007; University of Illinois Jazz Professor Chip McNeill, a saxophonist and pianist who’s also played with Frank Sinatra, Sammy Davis Jr. and Dizzy Gillespie; and trumpeter Rob Parton, who’s held spots on the Chicago Symphony Orchestra and the New York Philharmonic.

Vocalist Barrington Coleman is another U of I professor who took up a 2001 invite from HJO. The following year, fellow jazz vocalist Kurt Elling was a HJO guest. McNeill and Kelly are still listed as guests who occasionally join the band for features.

HJO has performed tunes such “Hotter Than That” by Louie Armstrong, “Funky Cha-Cha” by Arturo Sandoval, and several penned by Hoffman himself.

Singleton said: “We always end with a tune arrangement by Hoffman called ‘I Want You.'”

Singleton said the orchestra is always recruiting additional musicians, adding they do move them around in the band. They also look for a certain skill level.

“You don’t have to put down your horn after high school or college,” he said, adding there are highly talented jazz groups out there. Singleton said they might not be traveling around the world, but they still maintain that high standard of quality.

“(HJO) is one of those groups for you. You can continue to keep playing after college and keep building onto your talent,” he said.

The lead trumpeter also said HJO serves as a launching pad for its members: Singleton joined in 2004 after subbing the previous year.

Since then, he said he’s traveled to many places across the country to perform, thanks to the skills he built up with HJO. Singleton said he wants to extend that opportunity to other musicians.

One successful bandmate of his is Dan Burke, who plays the alto, tenor and baritone sax. While he’s not a professional musician, Singleton said, he can play just as well as one.

“It’s unbelievable what he does,” he said, noting Burke can nail “Cherokee” by Ray Noble by playing it as fast as possible, earning a standing ovation.

The majority of their members are based in Bloomington-Normal, he said, and they pull others from Peoria and Urbana-Champaign. Singleton said Hoffman has connected members with gigs like Peoria Civic Center Broadway-level musicals, jazz festivals and The Temptations’ 2009 show in Galesburg.

He said they also work with area schools that are growing their jazz programs, stepping in to mentor their classes and send them through the entire history of jazz music.

“You can start out with heavy sound, but it drops down to a small combo group,” he said.

Singleton said he enjoys that the band is able to feature each member. He said they do a lot of showmanship in their performances, changing the style and adding variety.

“It keeps the engagement higher,” he said.