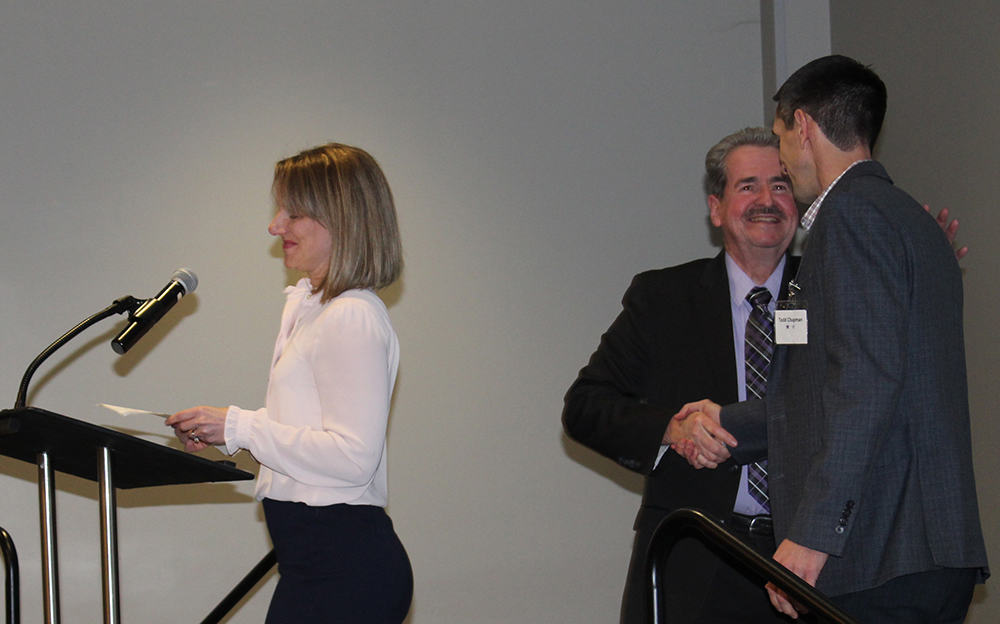 On November 14, 2019, Corin Chapman, Co-Chair of the Harmony Park, spoke at Illinois Prairie Community Foundation’s annual Celebrating Local Philanthropy luncheon about how IPCF helped the project come to completion. She is shown above with her husband Todd Chapman and event emcee Dan Irvin

“For those of you who may be unfamiliar with the Harmony Park Project, it started as a conversation between representatives of four local non-profits: Max’s Miles Foundation, Autism McLean, Marcfirst and Bloomington-Normal Jaycees.

As members of organizations working with children with disabilities, we had collectively noticed the lack of an accessible playground in our community.

As we started to do research we realized that within Illinois, there were only two communities with over 50,000 people that did not have an accessible playground – Bloomington and Normal.

Based on this information, our casual conversation began to form into a playground that had surfacing and ramps suitable for children that used mobility devices such as wheelchairs and walkers;  a place that was fully fenced to protect those children on the autism spectrum and prone to wandering; and most importantly that had unique equipment specifically designed to bring children who are typically developing and differently abled together for peer-to-peer interactions.

We began working together with the City of Bloomington to raise the funds to build a playground for ALL children of ALL abilities, but there were two main problems.

Essentially, we didn’t feel donors would feel comfortable giving funds to the Harmony Park Project, but also didn’t want the complications of giving the funds to our organizations.

This is when we reached out to the Illinois Prairie Community Foundation about becoming our fiscal sponsor.  By having a separate account with IPCF, we could easily direct donations to the project and with IPCF as the fiscal sponsor, we were able to establish the legitimacy and credibility that we needed to get this project off the ground.

As a plus, IPCF also handled the administrative aspect as far as tracking donations, providing tax receipts, and sending thank you notes. No small feat when you have over 400 separate donors.

Outside of being our fiscal sponsor, IPCF also provided a grant for the Spinning Seat through the Youth Engaged in Philanthropy (YEP) program and another grant for the Merry Go All from the General Grant cycle.

Without the structure and support of the IPCF, I believe we would not have been able to successfully complete this amazing project and our community is so lucky to have this incredible organization as a resource.

I would like to personally say thank you to Greg, Michele, and Linda and anyone who supports IPCF. Because of you, on August 8th we opened Harmony Park and I was finally able to see my son, Max, play right alongside his peers as we had always dreamed he would. “