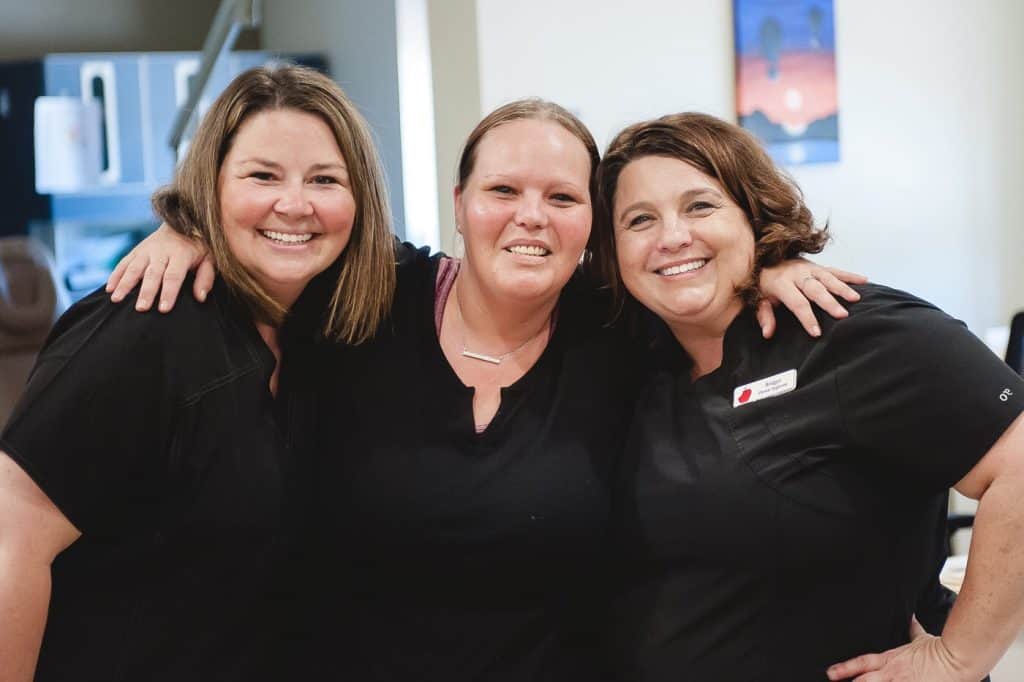 It’s been 14 years since Melissa had all of her teeth. “I grew up in a poor family, so we didn’t have insurance,” she says. “I don’t remember ever really going to a dentist when I was younger.” Her remaining teeth were susceptible to frequent toothaches and infections.

Unable to afford her employer’s insurance plan, Melissa relied on the emergency room to treat her symptoms. “It would just keep coming back and keep coming back, and you’d just live off of antibiotics hoping that you don’t get really sick.”

Melissa had a total of 16 teeth removed at the CHCC dental clinic to address the infection and make room for her upper denture. “I love that I can smile now,” she says. “I still smiled (before), but not as big because I didn’t feel confident. When I’d laugh I’d always cover my mouth, and I don’t have to now.”

She makes sure her children understand the importance of brushing and flossing. “Now that I’m older, I’m like, just make sure you take care of your teeth, because you only get one shot at it.”

Tony lost his healthcare coverage when he had a series of epileptic seizures and had to take time off work. He became a CHCC patient a year-and-a-half ago.

Tony has also lived many years without most of his teeth. He lost half of his upper teeth during a procedure to address frequent sinus infections. But his sinuses and remaining teeth continued to bother him. Then Tony lost his two front teeth as the result of a fall. The missing teeth made eating and talking difficult.

In February, Dr. Anthony Pecora began the long process of extracting all of Tony’s upper teeth to get him ready for a full set of dentures. He says having the teeth removed relieved a lot of pressure and pain, and eliminated his infections.

Tony is excited about his new smile. “I haven’t smiled in a long, long time,” he says. “Not that I didn’t want to. It was just, ‘Nah, better not.’” He even got to show off his new smile at his daughter’s wedding.

Ricky became a CHCC patient just over a year ago. While living in Chicago he was able to access healthcare coverage through CountyCare.

But after moving to McLean County, he found the income from his part-time job disqualified him for public aid. Ricky says his employer does offer insurance, “But if I pay insurance, I won’t be able to have a place to live. It would cost hundreds of dollars every pay period.”

At CHCC, Ricky has access to health care and dental care at no cost. He received a partial denture to replace his missing upper teeth. “When the dental clinic came in, I was just so blessed to be a part of the first group,” he says. “And I had a little phobia at first of smiling because I needed work on my mouth, and now I don’t have that. They got me in there and now I’m smiling too much.”

Kimberli was a clinic patient for years until she was able to get coverage under her husband’s insurance plan. Then when her husband lost his job, both became uninsured and Kimberli came back to the clinic for care.

The problems with her teeth began after she was diagnosed with and began receiving treatment for endometriosis. “For whatever reason, my teeth became very brittle, and if I would bite down on something, I never knew what was going to do it, but they would just chip off and break.”

Then she broke two of her teeth in an accident. Without insurance, she had to pay nearly $1,600 at a local dentist’s office to get the teeth repaired, but after a month they broke again. “I just did not have the thousands of dollars that was necessary to go to a dentist.”

Kimberli says she and her husband are “the people that have worked at least one job all of our lives, sometimes two jobs, and so we are the people that fell through the cracks.” In February, Kimberli came to see Dr. Pecora to begin extracting all her broken and infected teeth, and provide her with a top denture.

“Dr. P took very good care of me,” she says. “I had some difficult teeth to pull, and he did a wonderful job. I love my top dentures now, I think they are awesome. My health has improved greatly, I have not had any more sinus infections.”

The Community Health Care Clinic is celebrating its 25 anniversary in July and is currently running an online fundraising campaign.