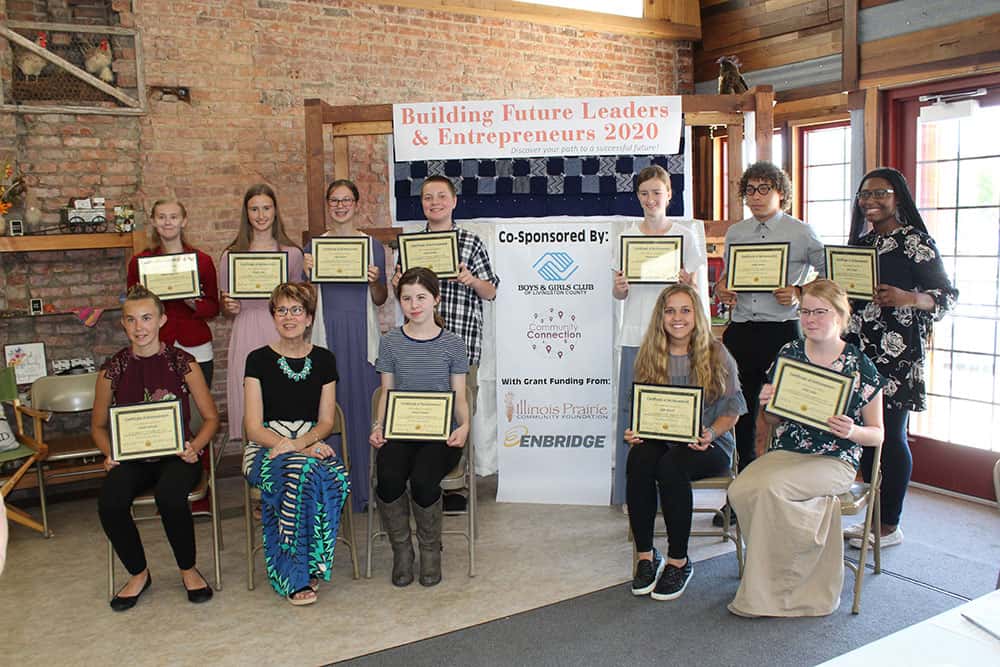 The class, offered for four hours, four days a week for four weeks at the Central Illinois Connection Center in Chatsworth, ended on July 2 with a graduation ceremony and Shark Tank presentations. View more photos.

Each week the students would learn about different aspects of leadership, visited with various leaders and business owners in the community, independently interviewed leaders and volunteered on local projects.

The youth were “really committed to this program,” said Lesley King, a John C. Maxwell certified business coach and speaker, who led the summer leadership program. “They really leaned in and learned; they stretched their capacity. We have many different personalities here and many were reserved; they got out of their comfort zones.”

Each participant spoke about leadership. Many read a poem or explained a concept they learned in the class, such as the difference between being a leader vs. a boss, being a servant leaders and the importance of words and attitude. In groups, they displayed posters highlighting the nuggets of information learned each week.

Next, the youth pitched products they had developed in a Shark Tank format. One group presented  “Ring, Ring,” a PA system and app for businesses to allow them to personalize music for use in their business or for callers waiting on hold. The second group pitched “Jar of Joy” that combines all the ingredients for a quick dessert (minus eggs or milk) into a mason jar. A third group presented “BKW Dog Treats,” goodies for our canine friends made mostly of human foods because “dogs like human food.” A fourth group presented the previous day due to planned absences by some group members.

During the Shark Tank presentation each group had to discuss their target market, cost to produce the item and their sales plan. Each group made an “ask” of their fellow classmates serving as judges to invest in the product for a stake in the company. All groups received commitments for funding from their peers.

After each class participant was presented with a certificate of achievement, Jody Martin of the Boys & Girls Club asked them how they were doing on their Journey Line of their life, something she had discussed on the first day of class. Had anyone reached their peak, she wondered. All agreed they had not reached the peak of their life, but had definitely learned during the class.

“We came to this program mostly as strangers,” said Xavier. “Now I trust the people sitting next to me, I’ve made some friends for life. It was definitely beneficial for shy people to gain public speaking skills.” He excluded himself from that group by saying he didn’t have a problem speaking up, which garnered many laughs from the group.

“We may be getting towards our peak” in terms of graduating from high school, said Melanie, “but we’re just starting our lives. We can either use this information and grow, or throw it in the trash and stay put.”

Ashley realized that “I have more to improve, especially in public speaking.”

Heidi S. said the class made her get out of her comfort zone and “I can apply this information throughout my life.”

Daniel spoke about moving to this area from North Carolina and having no friends when he started. “Now I’ve gained friends and it’s helped me grow.”

Personal growth in turn builds leaders, said King. “Lead yourself first before others,” she told her students.

“Leadership is influence and they are not the same kids as four weeks ago,” said King. “They have learned to be creative, resourceful and whole.”

Parents echoed that sentiment, thanking representatives from the Boys & Girls Club and Community Connection Group of Central Illinois for offering the class. They were pleased to have a group of people willing to invest in their children’s future.  “Often kids receive the message better from an outside person, other than their parents,” said one parent.