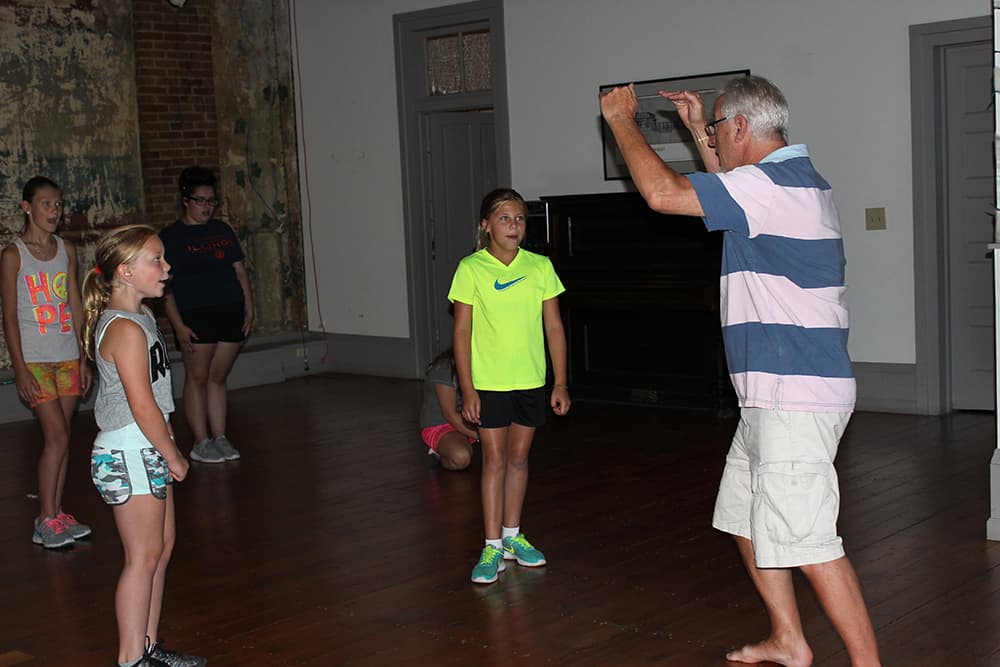 On Friday, July 14, 18 children involved in Atlanta Public Library’s Discovery Camp Players were dancing and singing in preparation for that evening’s public performance of “Rise Up: A Story of Love and Transformation.”

The camp, in its fifth year, is part of the library’s annual summer Arts Discovery Camp. This year, three separate one-week camps were offered, each focusing on different aspects of arts and culture – arts, theater, and music and dance. Open to children in first through eighth grades from Atlanta and surrounding Logan and McLean county communities, the camp took place in two daily segments – the first for the younger children and the latter for the older group. The split allowed faculty to focus on age-specific activities. View photos from the camp.

Leading the music and dance camp for the second year were Robert and Virginia Lupone. Robert, who has extensive experience in the New York dance and theater circles, had worked with Atlanta Public Library Director Cathy Maciariello through the Mellon Foundation in New York years ago. Last year, she asked him to lead the session and he agreed again this year.

The Lupones gave the participants valuable advice on handling performance anxiety and nerves in advance of their performance. “Don’t hesitate,” Robert said, adding “If you make a mistake, the audience will never know unless you give them a clue” through body language. Virginia told another “It’s better to try and make a mistake than to do nothing and fade out.”

While they were still working out the kinks in the program in the morning, Maciariello was certain of one thing: “It always comes together at show time.”

The summer camps are well-attended, said Maciariello, with some kids coming all five years the program’s been offered. In fact, the program used to end when kids finished fifth grade, but so many enjoyed the program that the age range was expanded to junior high age. “They all want to come back,” said Maciariello.

The Atlanta library has received a grant from IPCF’s Mirza Arts & Culture Fund since beginning the summer program. Maciariello says the grant allows the library to keep the cost low to participants ($25 per child with a discount for additional children). “If we didn’t have the IPCF grants, we would have to make major changes to the program like charging more and not being able to have it for three weeks,” said Maciariello.

In the future, Maciariello would like to add a learning-based option to the summer program lineup. During the school year, the library offers a Science Slam program where participants learn about design by building such things habitats, catapults and bridges. Mostly attended by boys, she’d like to offer it in the summer and get more students involved in STEAM (science, technology, engineering, art and math) coursework.

Maciariello remains a firm believer in the arts. “I think artmaking is one of the community builders,” she said. “It’s one of the best things we can give the children in our community.”