The West Market Street Council plans to take ownership of the property at the intersection of West Market and Howard streets in Bloomington and turn it into a home for several retail businesses, community service agencies and a not-for-profit grocery store that would anchor the plaza. Project advocates see the development of a neighborhood grocery store as ending the food desert in west Bloomington, formally designated by the City of Bloomington, McLean County and the U.S. Department of Agriculture. 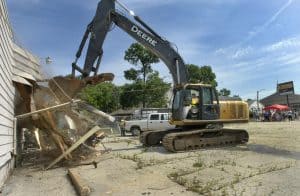 Preserving the site’s history is a major component of the project and is being incorporated into the new plaza’s design, said Laurie Bell and Arthur Haynes, who started the redevelopment initiative two years ago.

“This used to be the place where the community gathered. This was the place where you could give your kid a couple of bucks and send them to the store safely to pick up some things,” said Bell, recalling the plaza’s heyday.

Redevelopment of the site into the West Market Street Plaza is a way of re-creating a local economy “where money is being spent and earned right here in West Bloomington,” Bell said. “So we honor the people of the heyday.”

If you would like to help the West Market Street Council meet the goal of creating a grocery store, please click on the Donate button below. If you prefer to make a donation in another manner, click here for information.