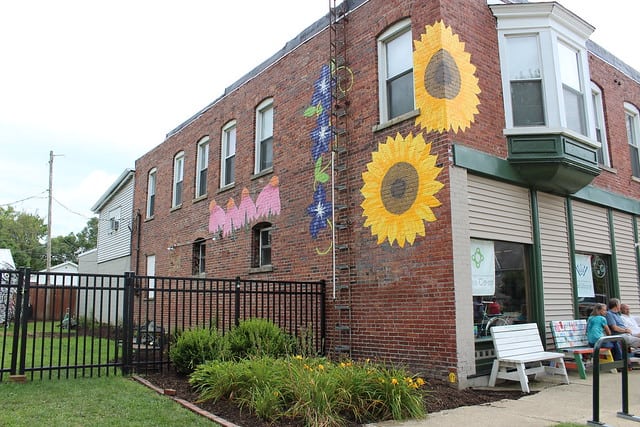 Ideas, like plants, need a nurturing location in which to grow and take root.

The West Bloomington Revitalization Project, at the corner of Washington and Allin streets, offers the perfect environment for ideas to germinate and blossom. It is the growing ground for many west-side community projects like the Bike Co-op, Tool Library, Seed Library and Book Bike.

On Saturday, August 17, 2019, about 75 people from around the community gathered to dedicate two recent projects at the WBRP – the Rick Heiser Memorial Garden and Roots Pride Vision Murals. Both projects received funding from Illinois Prairie Community Foundation through a General Grant and Mirza/Arts & Culture Grant. View more photos from dedication event

Rick Heiser was a founding member and devoted volunteer at WBRP, said WBRP president Deborah Halperin. “Rick saw this as a quality of life planning project,” she said. “He was one of those people who wanted to get involved and do everything possible that he could. He was the Bike Co-op.”

The Rick Heiser Memorial Garden features native plants which have deep roots and thrive in their home environment. Some plants in the garden were donated by Rick’s neighbors and friends. His four brothers did much of the mulch work and planting in the garden which was dedicated on Aug. 17.

“This (garden) means that Rick will always be here in this neighborhood,” said his wife Susan. “This place completes what he hoped for in the neighborhood.” She was joined in dedicating the garden by their children and grandchildren, plus many other family members from as far away at southern Illinois.

Also dedicated on the same day were two murals on the east and west sides of the WBRP building – part of the WBRP Roots – Pride – Vision project. The mural on the west side along Allin Street says PRIDE and represents the feeling that West Bloomington residents have for their neighborhoods.

Doug DeLong, owner of Osborn & DeLong graphic design studio, designed and painted the murals. The idea for the West Side PRIDE mural came from a community meeting where “many people showed up and expressed their pride for the West Side,” said DeLong, who coincidentally now lives in the Heisers’ former home in the neighborhood. DeLong was helped with the painting of the PRIDE mural by Raya Hussain of Egypt, an intern from Illinois Wesleyan University.

On the east side of the WBRP building – the same side as the Rick Heiser Memorial Garden – DeLong painted some native flowers. A sunflower, clematis and cone flowers remind neighbors of their roots and echoes the plantings in the garden below. The idea for the flowers bloomed from an essay neighbor Ruth Cobb wrote about the many elements that have become part of a neighborhood. Read Ruth Cobb’s essay

“There is so much need in this community, but so many people willing to help,” said Cobb.

Also unveiled the same day was a sculpture in the back of the garden made of bike rims. Dan Terkla, who volunteers in the Bike Co-op, had been collecting old bike rims that could no longer be used on bikes because of safety concerns. With the help of Arthur, a 9-year-old boy from the neighborhood, his uncle Steve, and some IWU students, they fashioned a dome from the bike rims. The sculpture features two smaller openings through which children can crawl inside and a larger entrance for adults to walk through. Inside is a wooden floor of sorts where people can sit or stand.

“I’m so proud of how far this space has come in the last 2-3 years since (WBRP) bought this house,” said Halperin. “All of these things add to the layers of this neighborhood.”

As Rick Heiser said in an interview in 2014: “I think we are doing exciting things. There is great reason for optimism and enthusiasm on the west side. We have done more than I would have imagined.”

If you would like to help fund more programs like these in the community, donate online to IPCF’s Mirza/Arts & Culture Endowed Fund or IPCF’s Annual Campaign which funds General Grants.