As the end of the school year approached, children and tutors gathered for an end-of-the-year celebration at Western Avenue Community Center in Bloomington. The after-school program displayed artwork by the participants and the students with an awards program that included diplomas for graduating fifth-graders. See photos from event.

Throughout the school year, about 45 minority and low-income students and an equal number of tutors participated in the program for a few hours after school each day. On a typical day, students arrived by bus from their schools (most from District 87 in Bloomington) and enjoyed a choice of activities until all participants arrive.

The program opened with a devotional, after which students split into groups based on their grade, said WACC After-School Program Director Jennifer Trimble. After a healthy snack, students met one-on-one or in small groups with a tutor for 15-20 minutes of reading, then worked on other homework they might have. After a student’s homework was completed, they could participate in enrichment activities, such as art projects or science experiments.

Tutor Evelyn Lozano, an Illinois State University graduate student in art education, oversaw arts programs with the children in the after-school program. She had the children look at a wide variety of work by a diversity group of artists. She encouraged them to personalize the art through various means such as abstract, printmaking and ceramics. “I didn’t want them to just recreate the art, I wanted them to personalize it – make it their own, develop their own style,” Lozano said. She also organized the creation of Pinewood Derby cars, an Earth Day project and enrichment days. 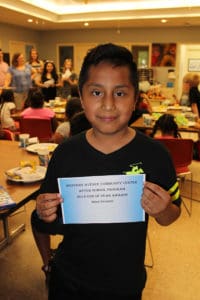 The “Most Genuine” award winner displays his award during a celebration on the last day of the after-school program.

Jesus Santoy of Ottawa started with the WACC after-school program as a tutor, then organized science experiments for the fifth-graders in the last few weeks of the program. A microlab science major at ISU, developed the science experiments as part of a service learning program. “I encouraged the kids to think outside of the box” by making slime, volcanoes and foam, in addition to learning the properties of metal, said Santoy.

The program program’s aim is to close the gap between low-income students and their more affluent peers, and well-trained tutors are a must, said Trimble. That’s where a grant from the Illinois Prairie Community Foundation helped for the 2017-18 school year.

The $3,000 grant helped provide training for tutors through Illinois Wesleyan and Illinois State universities. Nearly all of the program’s tutors are students at the two universities.

In addition to the training that all mentors and tutors receive, Emma Lewis from Oak Park, an elementary education and Spanish major at IWU, attended Mental Health and First Aid training to learn how to help people dealing with mental health issues and Darkness into Light, a program about various forms of abuse. 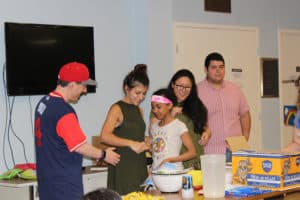 The additional training “gives you a different understanding for children and their parents,” Lewis said, adding she now has some best practices that will help in working with all age levels. Lewis is an intern at WACC over the summer, working on a variety of program activities.