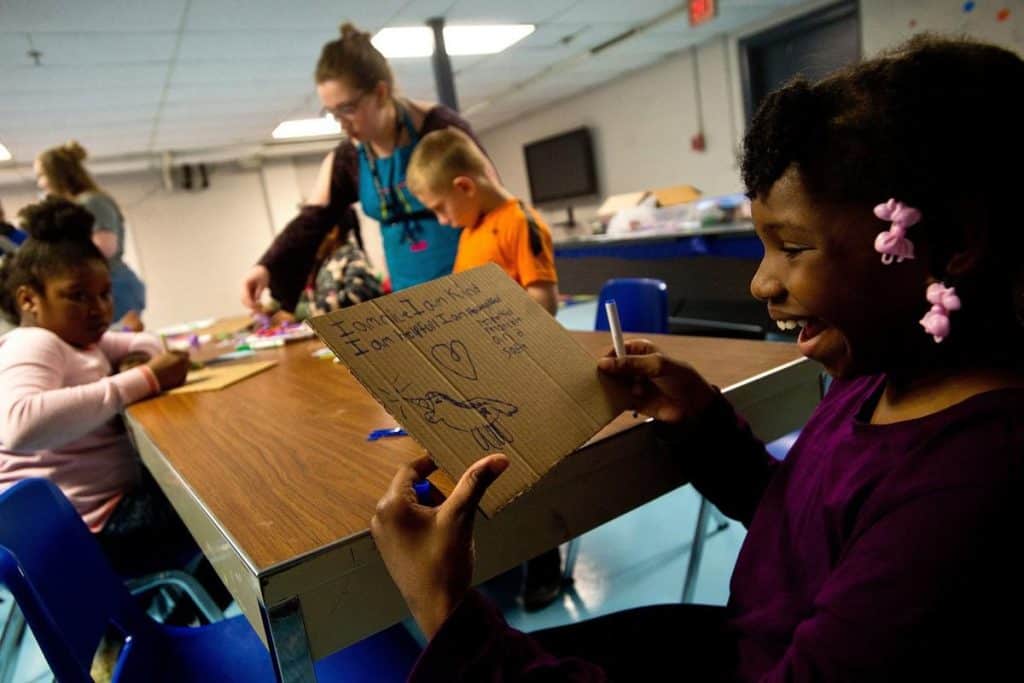 BLOOMINGTON — When you visit an after-school art class with children from kindergarten through fifth grade, you expect a bit of chaos, questions, curiosity and chatter — not a lot of deep thought and introspection.

But sometimes the most insightful philosophers wear pink and white ribbon barrettes in their hair.

As 9-year-old Micheri Seiller worked on a collage in the basement of the Boys & Girls Club of Bloomington-Normal, she said, “My favorite thing about art is it feels like it makes anything possible.”

That’s just the kind of optimism the Illinois Art Station is looking for as it presents programs like the one at the Boys & Girls Club.

It’s the same optimism the Illinois State University program needs as it runs the Illinois Art Station out of a brightly colored van and temporary quarters on campus, waiting for a permanent space.

“Our mission is to provide all children, youth and their families with transformative learning through hands-on experiences in the visual arts,” said Isra El-beshir, director of the fledgling program since October 2017.

Berk, distinguished psychology professor emerita and author of several books on child development, is founding donor of the Art Station.

While meeting with one of her editors in New York, she visited the Children’s Museum of the Arts and wanted to see something similar in Bloomington-Normal.

“I believe that the arts — the visual arts, in particular — have a unique power to support diverse aspects of development,” said Berk. “I envision it (the Art Station) as a place where all of this tremendous power can come together.”

The recent Art Station class at the Boys & Girls Club is among many that have been done in partnership with the Western Avenue Community Center, The Autism Place, public libraries and other organizations.

From June to December 2018, the Art Station offered 40 classes through nine community partners, serving 1,246 children, youth and their families.

One of its more visible projects is a mural painted last summer along Constitution Trail where it runs under Washington Street.

Another mural project is planned this year, teaming with the city of Bloomington and Artolution, an international nonprofit organization whose co-founder and co-director, Joel Bergner, grew up in Bloomington-Normal. Bergner will lead the project. Berk is the Artolution board educational director.

The mural will be painted at the corner of Market Street and Monroe Avenue. It will be unveiled to the public at noon June 9. Local artists and youths who would like to be involved can apply at bit.ly/MarketYouthMural or call Peggy Finnegan-Boyes at 309-438-0882.

Zoe Kollias, a senior in art education from Schaumburg, said she has observed students in school classrooms “and they’re hesitant,” but at the Art Station classes, “they go for it.”

That’s one of the things art education major Micaela Bucci likes about teaching the class.

“They’re so willing to experiment,” said the senior from Lansing.

Brooke Ball, a graduate assistant from New Lenox studying for her master’s degree in art education, said the environment is different.

“We get the creativity and involvement of school but not the strict rules,” said Ball.

In fact, fellow graduate assistant Luke Lowers of Normal, studying art technology, said, “We encourage them to make a mess.”

Last week’s project was patterned after the work of African American artist Howardena Pindell, who uses images to draw people in and think about bigger issues.

Ball had the students write “I am” statements on pieces of cardboard that were the base for their collage.

While some children chose favorite colors or random elements for their collages, Micheri created an elaborate backstory of a town with towers and bridges and “stinky cheese.”

Jennifer Hall, director of operations for the Boys & Girls Club, said the Art Station program “has been truly amazing. … It brings in different people and different elements.”

El-beshir said she is pleased with the connections the Illinois Art Station has made so far. Five years from now, “I see it being a community anchor … an ambassador for visual arts education.”

Illinois Prairie Community Foundation’s Women to Women Giving Circle awarded a 2019 grant to Illinois Art Station and Illinois Symphony Orchestra for “Itsy Arts: Emotions and Melodies,” a program where children ages 3-5 and their caregivers from Children’s Home + Aid identify six emotions through interactive and expressive music and artmaking with the purpose of developing/improving social-emotional skills.

If you would like to help fund more programs like this in the community, donate online to the Women to Women Giving Circle which funds grants for women and children in Central Illinois.