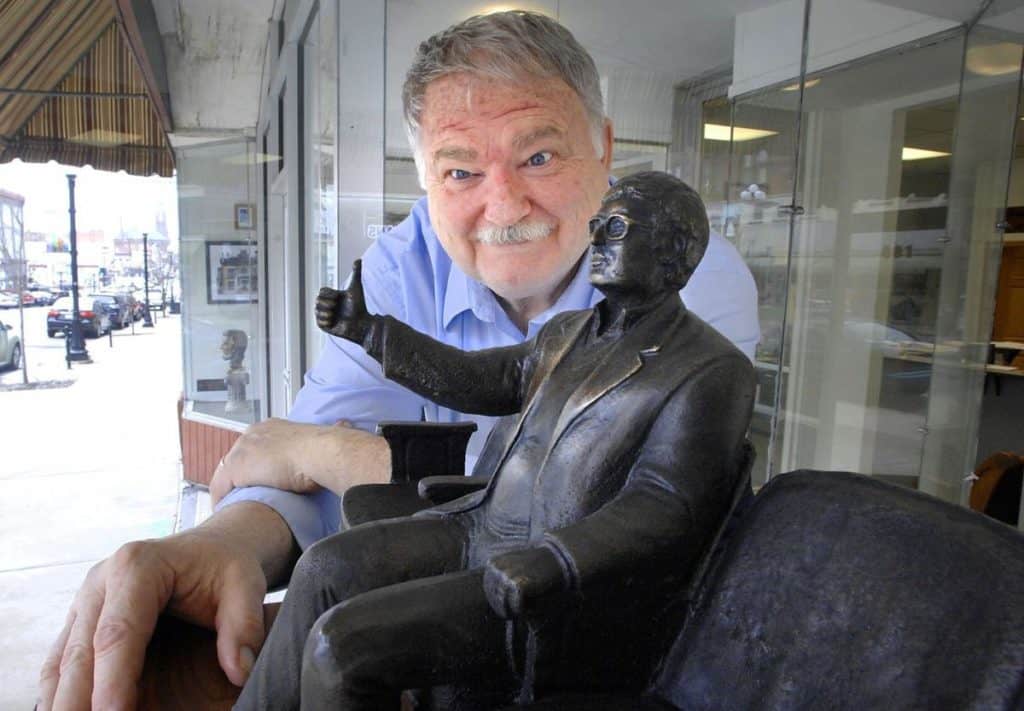 Famed movie critic Roger Ebert may have died five years ago this spring.

But his likeness lives on and his thumb remains raised … all thanks to Bloomington artist Rick Harney.

The bronze sculpture, comprised of 36 parts, features the critic seated on a bench, with trademark thumb raised skyward.

Before there was that full-scale statue, there was the tabletop maquette version created by Harney as the reference for everything that followed.

As a gesture of gratitude for their contribution to the project ($10,000), Harney’s mini-Roger was bequeathed to B-N’s Beyond Normal Films group and displayed in the lobby of the Normal Theater for the past two years.

When BNF disbanded at the end of 2017, a new home for the maquette was sought, according to Dave Hauman, founder of the Community Fund for Public Art, created last fall and located at the Illinois Prairie Community Foundation.

“My wife, Diane, and I do a large amount of traveling, and one of the things that continues to disappoint us is the near-total absence of public art compared to all kinds of other places,” says Hauman.

Hence, the new fund and its goal: to encourage the expansion of public art within the service area of the IPCF, including McLean, Livingston, Logan and DeWitt counties.

Among the first fruits of that mission is facilitating the move of the Ebert maquette to its new public home: in the storefront window of downtown Bloomington attorney Frank Hoffman’s law office at 401 N. Main St.

Hauman says he hopes giving downtown passers-by a front-row seat to viewing the mini-Roger is just the beginning for the Community Fund for Public Art’s crusade.

Learn more about the Community Fund for Public Art.