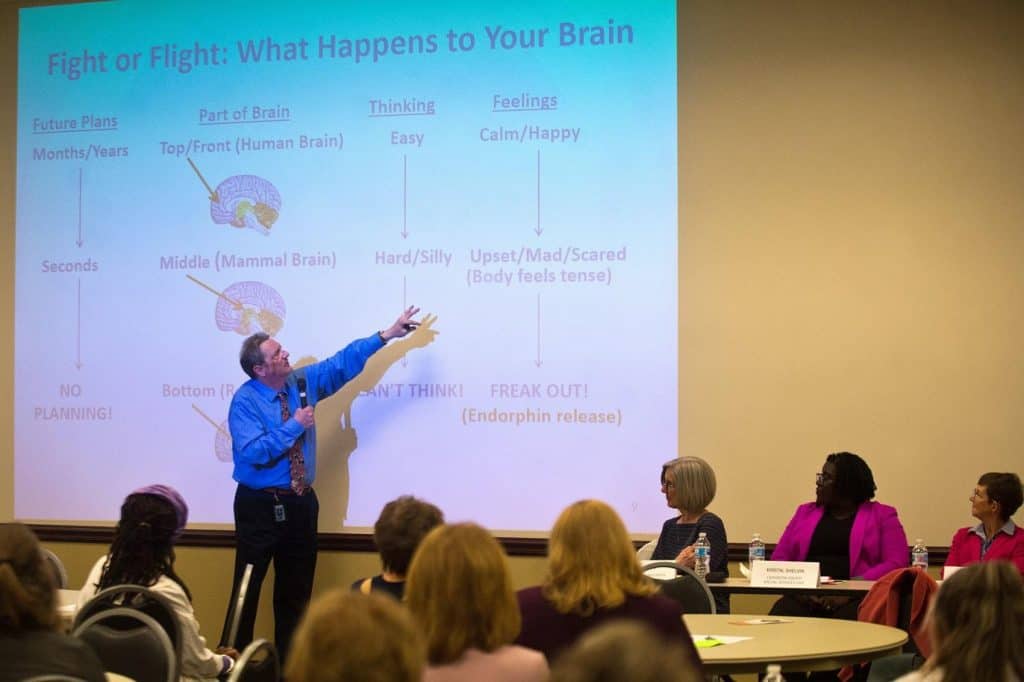 NORMAL — Most people have experienced trauma by age 18, but healing is possible.

And we’re all a part of the healing process.

That was a message Tuesday at a forum on trauma and its effect on children. Hosted by the Women to Women Giving Circle of the Illinois Prairie Community Foundation, the forum at Illinois State University’s Alumni Center was attended by about 70 people. View photos from Forum

“At least 80 percent of our students and families have experienced trauma,” Lusk said. “This is not just a child welfare issue.”

Major trauma can include physical, sexual or emotional abuse; emotional neglect; exposure to violence; a car crash; or sudden and unexpected death of a family member.

But chronic trauma also can result from less acute but daily stresses such as poverty, racism, divorce, bullying or a lack of food or health care, said Kristal Shelvin, clinical services supervisor at the Livingston County Special Services Unit, where she coordinates school psychology and social work services.

“Every human in the room is impacted by trauma,” said Karen Stipp, an ISU associate professor of social work. “We’re all trauma kids.”

Research conducted in the 1990s and since then proved what mental health professionals long suspected: that trauma impacts the brain.

The brain’s prefrontal cortex, which is responsible for thinking and problem-solving, often is underdeveloped or poorly functioning in people who have experienced trauma, Lusk said.

So when trauma survivors experience something that triggers a flashback, it’s more difficult for them to think clearly. They may react emotionally, fight or flee.

That’s why some trauma survivors react to triggers with negative behavior that provides relief in the short term but cause problems in the long run, such as cutting themselves, using drugs, engaging in unprotected sex or other thrill-seeking behavior, he said.

What results can include behavior problems, substance abuse, unplanned pregnancies, injuries, absenteeism and poor performance at school and work.

“This (trauma) is a huge economic drain on our country,” Lusk said. “It is an investment to treat our children and the earlier we treat them, the better.”

“Just because they have these things against them doesn’t mean it’s an end point for them,” Shelvin said.

“The good news is that healing can happen,” Stipp said.

For a person who has been triggered by recollection of trauma, Stipp recommends listening to them and saying “I see you, you’re OK, you are safe here.”

Coping skills for everyone can include deep breathing and a balanced lifestyle that includes positive relationships with others, hydration and nourishment, physical activity, self-care and sleep, Stipp and Shelvin said.

Caption for Photo at Top of Page:
Rob Lusk, clinical director at The Baby Fold, explains how the brain responds to fight-or-flight situations during a public forum on trauma and its effect on children on Tuesday, April 23, 2019, at the ISU Alumni Center in Normal. Looking on are Karen Stipp, associate professor of social work at Illinois State University; Livingston County Special Services Unit clinical services supervisor Kristal Shelvin; and retired 11th Judicial Circuit Judge Elizabeth Robb.