Army Ranger Sgt. Joshua P. Rodgers, 22, of Bloomington, was killed in action April 27, 2017 in Nangarhar Province during a joint operation with Afghan forces. Josh was assigned to Company C, 3rd Battalion, 75th Ranger Regiment, and stationed at Fort Benning, Ga. He was on his third deployment to Afghanistan. 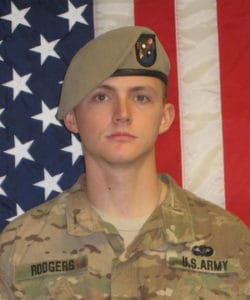 Josh was born Aug. 22, 1994, in Bloomington. Josh attended Northpoint Elementary, Kingsley Junior High and Normal Community High School. After graduating from high school in May 2013, he enlisted in the U.S. Army and completed One Station Unit Training at Fort Benning, as an infantryman. Following completion of the Basic Airborne Course, Rodgers was assigned to the Ranger Assessment and Selection Program 1, also at Fort Benning.

Josh loved his country, his family and friends, the military, and especially, his fellow Rangers and regiment. Josh knew his purpose in life and was living out his dream. He was an amazing friend with a big heart. Josh had a smile that could light up any room and a very contagious laugh that was loved by all.

He was a man of very few words, but when he spoke you listened. Through hard work and determination he continually led by example and made everyone around him proud. His generosity was unwavering and if you needed anything from him he was always there. Josh was, and forever will be, a warrior. Tenacious, humble, determined and supportive. He was a true inspiration to everyone who knew him.

If you would like to help the Rodgers family meet this goal, please donate online by clicking on the Donate button below. If you prefer to make a donation in another manner, click here for information.