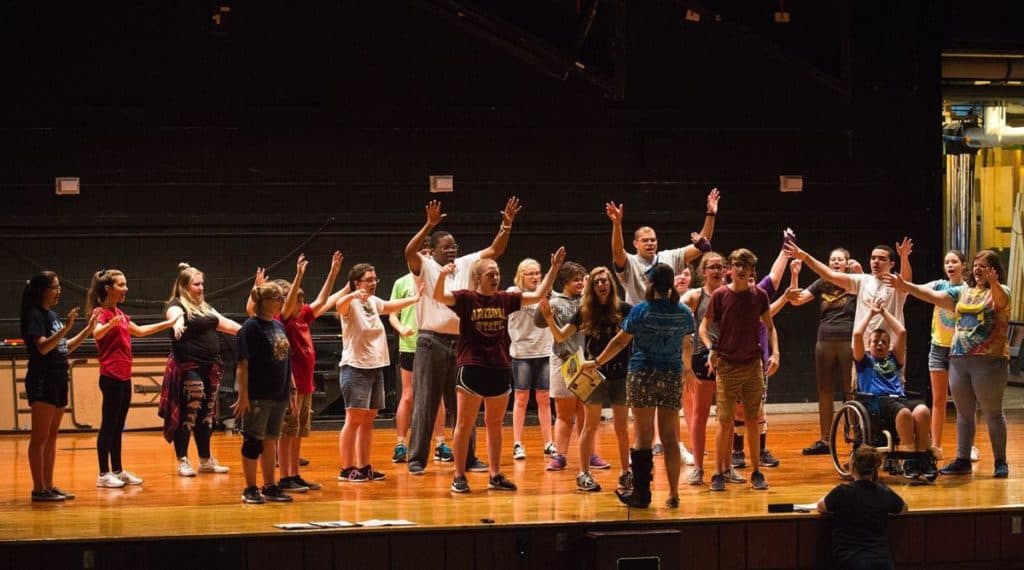 BLOOMINGTON — Penguins might be flightless birds, but members of the Penguin Project of McLean County have been soaring for 10 years.

The Penguin Project is a unique theater production involving “artists,” or individuals with disabilities ages 10 to 24, who are paired with “mentors,” ages 12 to 24, who help guide them through the production. 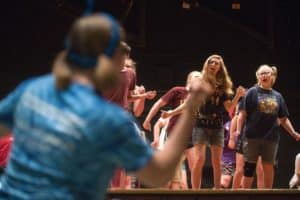 Several artists have been with the program since it began 10 years ago, including 18-year-old performer Ally Davis of Atlanta.

“When I started at 8 years old, it was very exciting and nerve-wracking. It was my first time getting on a stage and performing,” said Davis. “Now, looking out and seeing everyone in the audience gives me good butterflies.”

Last week, Davis joined 40 other artists, their mentors and directors at University High School’s Stroud Auditorium to rehearse their latest production that debuts this weekend — “Madagascar: A Musical Adventure Jr.”

“Penguin Project hasn’t just given me friends, it’s given me a whole other family. But it’s not just the cast and crew I enjoy — it’s the audience,” said Davis, who plays Zelda the zookeeper in the play.

The artists have worked for months to memorize their lines, choreography and songs under the direction of several producers, directors and other volunteers. 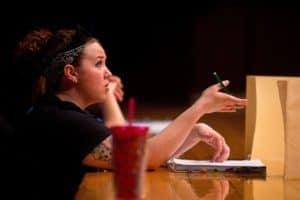 “The kids always take the show and run with it. They become submerged. It’s a magical, touching celebration of human spirit,” said director Jackie Gunderson.

Gunderson said the artists thrive from being on stage and drawing laughter and applause from the audience.

“They really do blossom. We find that people enjoy watching the show because it’s something they want to celebrate and see succeed,” she said.

Artist Stephen Donhardt, 22, of Normal, beamed through his entire rehearsal as Mort the lemur.

“It’s really amazing. I like hanging out with my friends,” said Donhardt, who has also been with the program since its inception.

Another decade-long member is Ladaricus Coleman, 17, of Bloomington, who will portray a member of the Foosa group in the play. 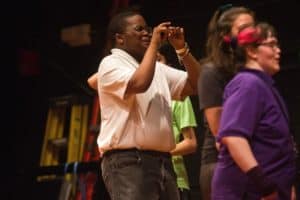 Ladaricus Coleman rehearses a scene with cast members for this year’s Penguin Project.

Barb Wells, vice president treasurer of the Penguin Project board, said she’s seen the program act as a sort of therapy to artists.

She said they have grown from shy children to confident solo performers. Most members also gain improved motor and speech skills.

“Special Olympics is a great organization out there, but for those who aren’t interested in sports, there isn’t much to do,” said Wells. “Not all artists are picked for their high school theater shows, but we’re seeing a change in that.”

That’s one of the goals of Penguin Project, said Wells, to “let them be a part of the community.”

Artist Joshua Kothe, 17, of Bloomington, said he has always been interested in theater and recently was part of a Tri-Valley High School production.

“It’s really fun for me to perform on stage. I just act like I’m living the scene. I think my acting skills have improved,” said Kothe who will act as a server/animal control member in the program. 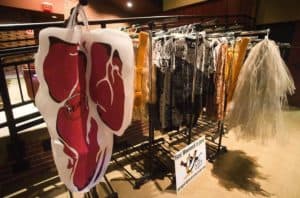 The Penguin Project of McLean County’s production of “Madagascar Jr. A Musical Adventure” features a variety of costumes.

Brayden Cunningham, 17, of Minonk, is a mentor in the program for John Roberts, 24, of Bloomington.

“I act outside of this, so I thought this looked like a unique experience to help others. By being a part of Penguin Project, I’ve had experiences with people that I normally wouldn’t. It’s been really good for me and broadened my horizons,” said Cunningham.

Roberts, who plays Skipper the penguin, said each year of the program has taught him something new.

“I’ve made new friends, including other people with autism,” said Roberts. “I feel a little sad that I’ll be aging out this year, but as long as the Penguin Project needs me and remembers me, I’ll be glad to be a part of it.”

At the end of each performance this weekend, artists will sing “Don’t Stop Believing” and all former staff, artists and mentors will be invited on stage to join in.