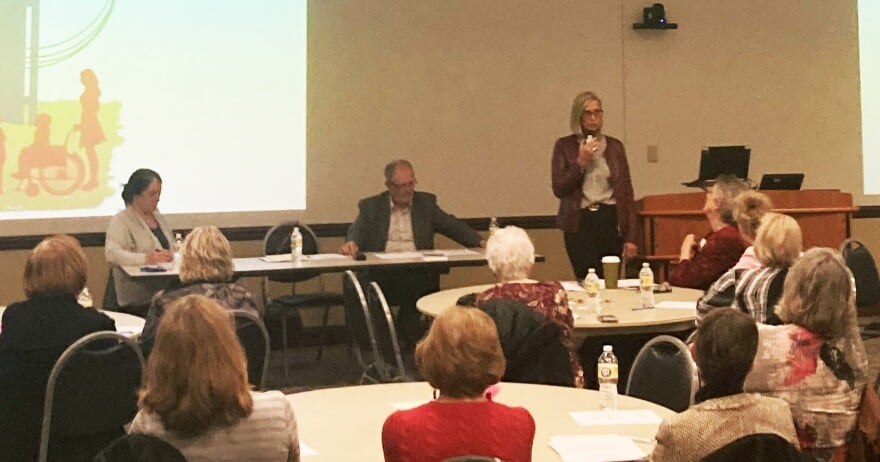 In observance of Autism Acceptance Month, local philanthropic organization Women to Women Giving Circle on Tuesday hosted a panel of experts at the ISU Alumni Center to discuss autism care from early childhood through adulthood.

The CDC reported last year that nearly 1 in 44 children across all ethnicities and socioeconomic groups in the United States was diagnosed with an Autism Spectrum Disorder as of 2018. Despite being so prevalent, the causes and effects of autism remain little understood to the general public.

The first of the three panelists, vice president of pediatric therapy at Marcfirst Christy Kosharek, spoke about early intervention in children from birth to age 3. She said that the time when a child first exhibits symptoms of autism can be one of the hardest for families.

“A lot of families are going through that process of wondering ‘why?’ or ‘what is going on with my child?’” she said.

Kosharek said that because of a general lack of resources and information for parents at this stage, Marcfirst focuses on supporting families of young children and connecting parents to help each other or even just to vent.

“It’s helpful to have other families there who have gone through or are going through that process,” she said.

The next panelist, director of special services for Bloomington School District 87 Leslie Hanson, spoke about transitioning from early childhood care to care in a traditional school setting. At the center of the district’s special education program is the Individualized Education Plan, or IEP, which allows students with autism to receive assistance tailored to their specific needs.

“I’m very proud of District 87 and how we educate students,” Hanson said. “We educate them for the most part in their home school, and I staff the schools so we are able to bring the specialized supports to them when they are being educated alongside their general education peers.”

District 87’s goal, Hanson said, is to prepare students to transition into adulthood and live productive lives on their own.

The final panelist, Autism McLean board member Dr. Chuck Hartseil, spoke about the difficulties that come with the change of legal status when a child with autism turns 18. At that age, individuals lose their disability status granted under the Department of Education’s Individuals with Disabilities Education Act and become their own legal advocates. However, Hartseil said, because it is not always feasible for a person with autism to be fully independent, families are required to make some difficult decisions.

“They then have to consider whether they have their children declared incompetent, so they have their decision-making power taken away from them; whether there is power of attorney for certain life decisions; or if they are going to need a decision support system for the rest of their life,” Hartseil said.

On top of that, young adults with autism can struggle financially too. A 2013 study published in the Journal of the American Academy of Child & Adolescent Psychiatry reported that 53.4% of the young adults on the autism spectrum they surveyed had ever worked for pay outside the home within the first eight years after leaving high school and earned just $8.10 per hour on average.

The panel also featured a special guest, a young autistic woman named Taylor who works as a lobby greeter at McDonald’s and runs track in the Special Olympics. Asked what she wants people to know about her and others on the autism spectrum, Taylor said, “In interacting with people, just understand them. For me, I can talk. Other people probably cannot talk, and they can get angry and frustrated. Sometimes cry, sometimes get mad. They can be aggressive. So it’s just important to understand them and realize what they’re going through.”

Tuesday’s event was hosted by the Women to Women Giving Circle, a program and funding arm administered by Illinois Prairie Community Foundation.