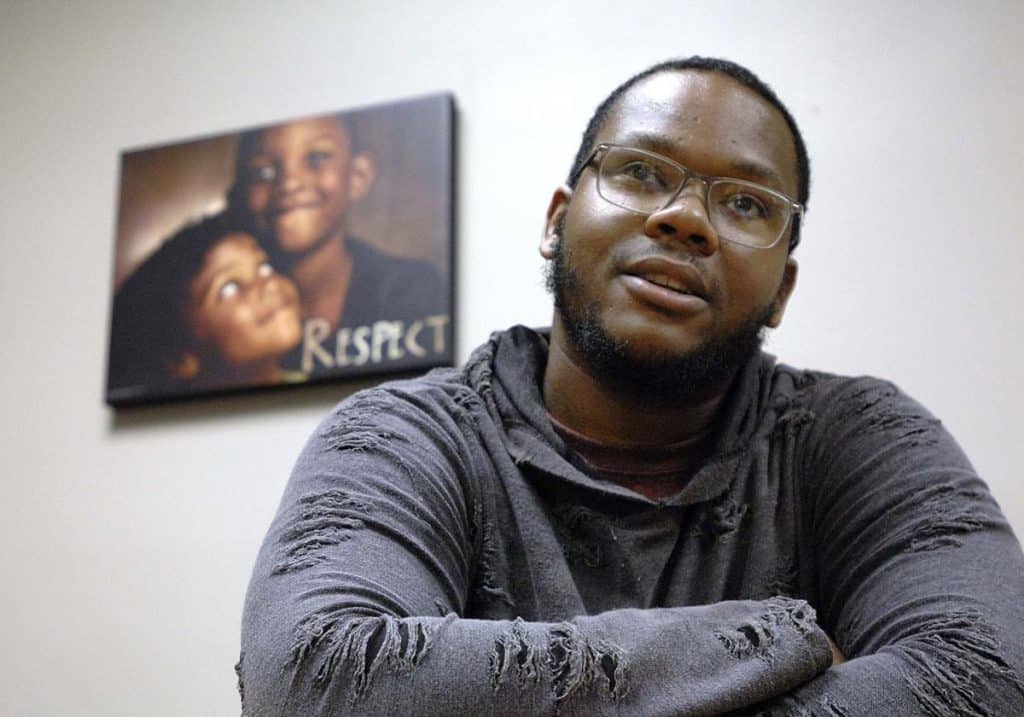 BLOOMINGTON — Tylin Davis learned what it meant to be a father when his fiancee had a medical complication following the birth of their daughter and was rushed to emergency surgery.

“I prayed to God, ‘please don’t take my baby,'” Davis, 21, of Bloomington, recalled last week during an interview at Children’s Home & Aid in Bloomington.

He looked to his newborn daughter and kept in check his flurry of emotions.

“I needed to put my emotions aside to make sure everyone was safe,” Davis said. “I learned to be patient. I learned to not take anything for granted.

His fiancee, Cearra Jackson, is doing well. The couple will marry in September. Their daughter, Taylin, is an active 10-month-old.

Now, the agency and other organizations are partnering to help support any interested father in McLean County.

“We are here because we are a part of the community,” John Fermon, Bloomington police public affairs officer, said after the June 19 coalition meeting. When men are empowered to be better fathers, that’s healthy for the community, he said.

One goal is to organize a dads’ group that would begin meeting this fall. Until then, coalition members are talking and interviewing dads to determine their challenges and what they want in a group.

Most human service agencies that serve families are focused on mothers and children, Kloppmann said.

“There are many wonderful programs targeting mother and child but fathers are sometimes left on the sidelines, though not deliberately,” Kloppmann said. Fatherhood services in communities are fewer, fragmented and often underfunded and not widely known, he said.

Fathers are important in raising safe, healthy and well-nurtured children but, according to the U.S. Census Bureau, one in four children in the United States lives without a father in the home.

According to the National Fatherhood Coalition, a child raised in a father-absent home is more likely to be at risk of poverty, to become a pregnant teen, to have behavioral problems, to face abuse and neglect, to abuse drugs, to go to prison, to be obese, to commit a crime and to drop out of high school.

Children’s Home & Aid concluded the best way to begin to address the problem was by “listening to the community” by forming a coalition including several agencies and dads.

Kyle Miller, an Illinois State University associate professor in the College of Education, is interviewing dads. During the June 19 meeting, she shared preliminary findings from 10 fathers interviewed so far:

While technology such as texting helps with safety and staying connected their children, smartphones impede conversations. Parents need to set technology boundaries.

When moms and dads are not living together or are divorced, the legal system favors moms when it comes to custody agreements. Fathers need help navigating the legal system.

Fathers must work at becoming better versions of themselves, such as being less judgmental and more sensitive. But fathers have few outlets to discuss the challenges of fatherhood, so access to social supports, fathers’ groups, counseling and church groups can help.

Coalition members asked Miller to continue her interviews. The coalition hopes to develop an action plan, which would include a dads’ group, in the fall, Kloppmann said.

“Our group will be a place where you can come talk about your challenges and successes of parenting in a group of other fathers who are experiencing the same things and find support and help through the group,” he said.

Among 25 people at the meeting was Paul Hursey Jr., mentoring chair for 100 Black Men of Central Illinois. Hursey has been involved in the coalition since the beginning to provide a male perspective and to gather information that he can bring back to youth mentees, some of whom are fathers.

Anthony Jones, a Bloomington father of four children ages 6 to 13, said he is divorced and has joint custody of his children.

“Your child needs to be a part of your life,” he said. “Time is the best thing you can give a child … but you have to have a routine.”

“This group has given me a lot of information as I continue on a positive path,” he said. Going forward, he hopes the group will help fathers to know their legal rights.

Tylin Davis will join the coalition.

“I hope it results in fathers stepping up more,” said Davis, a bank representative with State Farm, who plans to resume college courses next spring. “Fathers are afraid to step up because they are afraid they’ll mess up. But if you’re patient with your kid, you’ll have a great outcome.”

“It’s OK to make mistakes but assistance can help you be the best you can be,” Davis said. “At the end of the day, it’s love that counts.”

McLean County dads who want more information on the McLean County Fatherhood Coalition should contact Dorothy Davis at 309-834-5240 or at [email protected].

Photo Caption: Tylin Davis discusses how he learned what it meant to be a father when his fiancée was rushed to emergency surgery following the birth of their daughter. Davis, 21, of Bloomington plans to join the new McLean County Fatherhood Coalition, which meets at the Children’s Home + Aid.