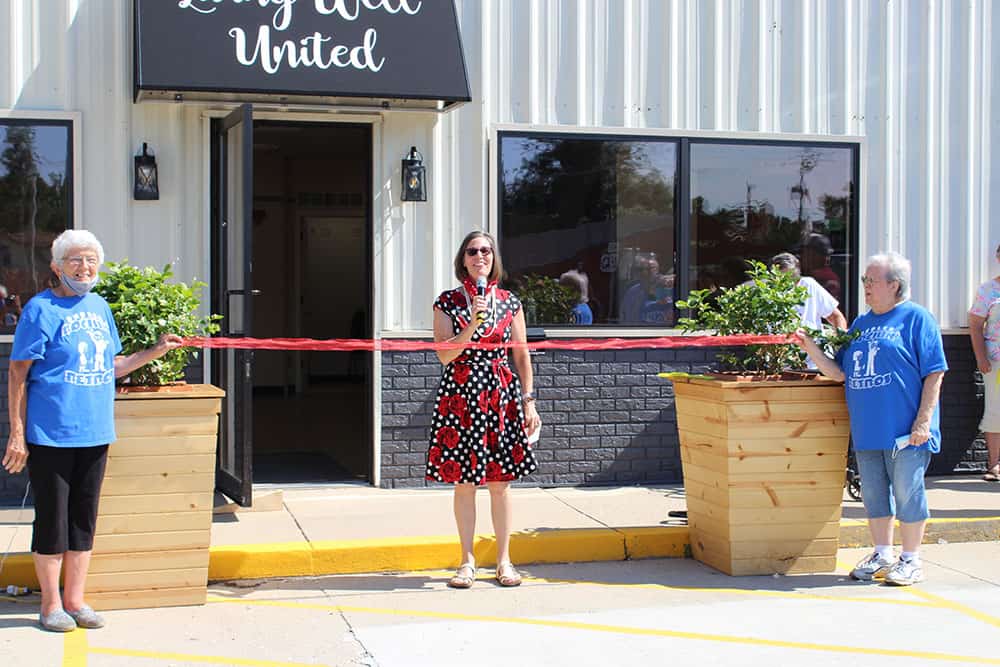 LEROY – July 3, was an early Independence Day for the seniors of LeRoy with the ribbon cutting and grand opening of the Living Well United senior center. View photos from grand opening

Calling the opening “an absolute dream,” Whiteman credited the volunteers who “poured their time and finances” into the remodeling to give back to the community. Among those receiving shout-outs from Whiteman were Kevin Pfoff, the project manager for the center, and architect Lori Johnson, who volunteered her time for the project.

Whiteman’s dream started about six years ago with the exercise program she leads at the LeRoy RePlex. She saw the need for a senior center in this small McLean County town where residents could gather to learn, socialize and exercise. She wants to draw seniors from not only LeRoy, but also Ellsworth, Arrowsmith and Cooksville, eventually hoping to get people from surrounding rural towns to serve on her board of directors.

“I started Living Well United so that someone would give us a building,” she said. Eventually, Casey’s gave her the building.

“Not once did our seniors say ‘It can’t be done,’ ” Whiteman said. “They simply said ‘What do you need done?’ And just like that, we have a senior center,” she said amending a phrase often uttered by Pfoff – “And just like that, it’s done.”

The center will be run by the seniors themselves, said Whiteman. “I have given 10 people keys to the building. They will be arriving Tuesdays and Thursdays (10 a.m. – 4 p.m.) to unlock the building, set it up for learning sessions, exercise classes, etc., and locking it up.”

While there is a coffee pot donated in memory of a senior who did not live to see the opening, “we’re not going to be just sitting around drinking coffee,” said Whiteman. There are round tables for discussions and learning, square tables for cards and puzzles, and new weights filled with sand called “softbells” for exercise classes.

Grand opening attendees were drawn again and again to two items inside the center – a real juke box filled with 45 records donated to the center and a Quarantine Quilt with individual squares completed by various senior volunteers.

Whiteman is especially proud of that the building is fully accessible. The day before the opening, one of her volunteers who uses a wheelchair toured the building and was able to easily use every feature of the facility. “I learned a lot about ADA (Americans with Disabilities Act), but it doesn’t hit home until you see someone actually be able to use everything here from the bathrooms to the coffee machine and kitchen,” Whiteman said.

While she will be working with the seniors during the month of July, Whiteman is looking forward to turning the facility over to the seniors themselves to run. She will stay involved teaching exercise classes and planning a Senior Prom which was postponed by the stay-at-home orders earlier this spring.