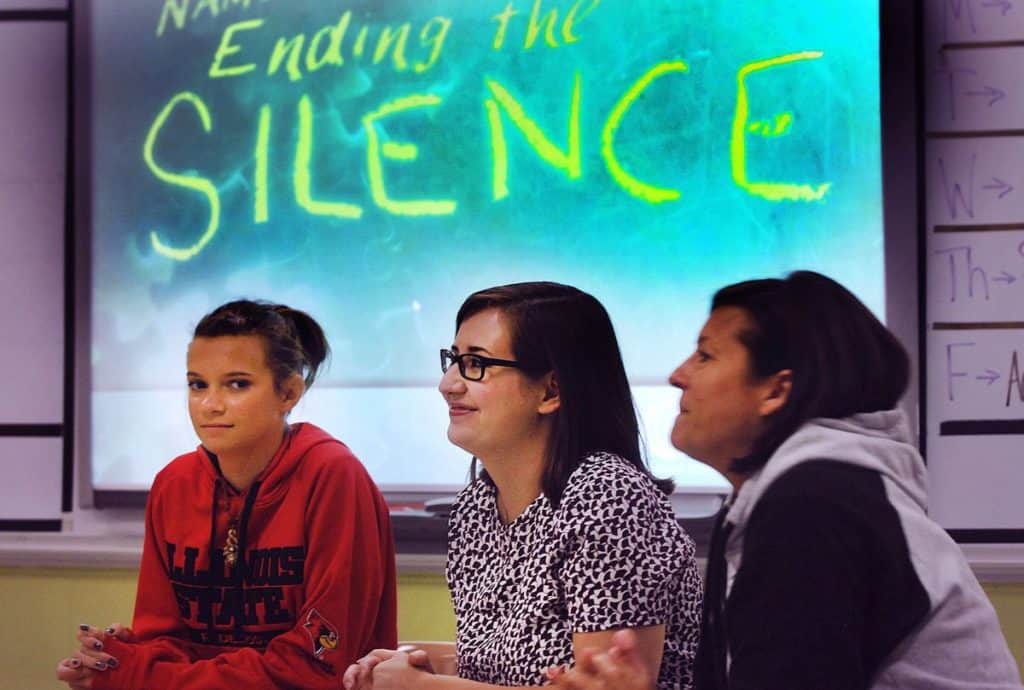 NORMAL — When Leah Ropp began watching the television series “13 Reasons Why” recently, she quickly discovered why it’s popular among teens and pre-teens more than five months after all 13 episodes were released on Netflix.

“It’s a good show,” Ropp, 15, said in the health room at Normal Community West High School, where she is a sophomore.

“It gives you a lot of information of why someone would commit suicide,” Ropp said.

The fictional story depicts a high school student who dies by suicide and leaves behind audiotapes in which she reveals that sexual assault, substance abuse and bullying led to her decision to take her life.

But that’s where problems with the series begin, said Ropp.

The series — and teen suicide in general — remains a hot-button topic among pre-teens, teens and young adults, especially among those who watch the program and anticipate its second season in 2018, said teens, young adults, mental health professionals and advocates.

Two problems that Ropp has with the series is that no one helps the teenage girl, and suicide is presented as the only option.

“Suicide should never be an option,” she said. “If someone is calling you names, tell them that’s not true and if it gets worse, get away from them and get help.”

“Leah talked with me before she started watching it and my comment to her was, ‘Just be careful and let’s talk about,'” said her mother, Becky Ropp of rural Normal.

“There is a danger if you watch this without a support network because it can glamorize suicide rather than assist,” Becky Ropp said. “Leah has a support network of friends and, in our family, we talk about mental health issues.

“If you don’t have that and you watch this show, that can be dangerous and scary,” Becky Ropp said. “So discuss it with people you feel safe and healthy with.”

Your parents, teacher, coach, school counselor or church pastor are among people that teens can consider confiding in, advised Sondra Simmons, a Normal West health teacher.

“The students like it,” Simmons said of the program. But some parents are afraid that if they bring up the subject of suicide to their teen, they will give their teen the idea of suicide.

“Talking about it won’t put the idea in their head,” said Adam Snell, 20, of Normal. The Anchor native is a psychology major at Illinois State University and a suicide prevention volunteer and who works with Ending the Silence, a mental health awareness and suicide prevention program for junior high and high school students.

“If that one trusted adult doesn’t listen to you, go to the next trusted adult,” said Tosha Maaks of Stanford, president of NAMI (National Alliance on Mental Illness) Livingston/McLean Counties.

“Sometimes, when we have sensitive issues like suicidal thoughts, the adults don’t want the family to look scarred or ill and hope the problem will go away,” said Marty Tarmann, a Normal West counselor. But if the thoughts aren’t discussed, it could lead to unhealthy behavior.

Neal Iden, co-president of the NAMI chapter at Heartland Community College and an Ending the Silence volunteer, said “Use the show as an opportunity to start a conversation.”

“Every family has dysfunction,” said Becky Ropp. “You have to build an open relationship with your children. Be open and vulnerable. Be in their world for a while. They’ll talk with you.”

“Mental illness is not a choice,” Tarmann said. “If we push it aside, it will only get worse … There are supports in place.”

“When you admit you have a problem, you can get help for that problem,” agreed Maaks, who lives with bipolar disorder, post-traumatic stress disorder, generalized anxiety disorder and attention-deficit hyperactivity disorder (ADHD). She attempted suicide in 2008, but has her mental illnesses under control and lives a full life.

Leah Ropp, a sophomore at Normal West, talks about students’ perspectives on suicide. Listening are, at left, her mother Becky Ropp, and at right, Colleen O’Connor of Project Oz

“When you talk about it, you discover that there is a whole community of people who can relate to what you are saying and are happy to talk with you about it,” Becky Ropp said.

Ending the Silence, designed by NAMI and presented locally by Project Oz, is given over two class periods and includes information about mental illness and suicide warning signs, facts and stats and how to get help, said Colleen O’Connor, a Project Oz prevention specialist and NAMI Livingston/McLean board member.

It also includes a story of hope from someone, like Maaks and Iden, who is living with mental illness.

“It was really cool,” said Leah Ropp, who participated in Ending the Silence last year when it was presented in Simmons’ class. “It was different because usually people don’t talk about this.”

“This showed the students ‘You are not alone,'” Simmons said.

“When they see themselves within us they realize ‘Maybe this is temporary. I can get through this,'” added Maaks.

Leah Ropp keeps busy with track, hockey and hanging out with friends.

O’Connor, who developed major depressive disorder in middle school and attempted suicide as a teen, lives successfully with her illness because she works with a purpose but then goes home and relaxes with her cats, her plants and Harry Potter movies.

“People call me ‘Sunshine’ because I’m smiling, but then I go home and engage in self-care,” she said.

If you suspect that a person is considering suicide, ask them, Snell said. If they are, listen to them, tell them you care and get them the help they need. A list accompanying this story specifies resources.

“Let the person know, ‘You don’t have to deal with it yourself. It’s OK. We’ll figure this out.'”

Because, unlike “13 Reasons Why,” the Ending the Silence program, and most teen crises, end well.

Note: Project Oz received a $3,000 grant from IPCF in 2017to help fund the Ending the Silence program