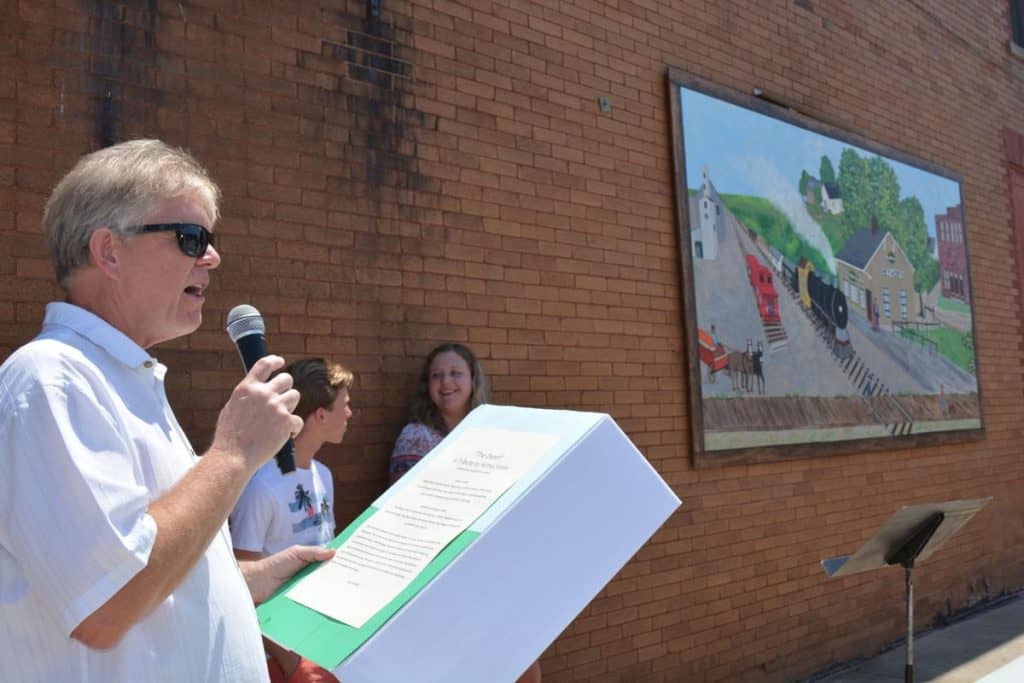 Reprinted with permission of The Pantagraph

HEYWORTH — A new mural in downtown Heyworth will both recognize Heyworth’s past and serve as a tribute to a former Heyworth educator and folk-art rug designer.

The Depot Mural was unveiled before a crowd of about 50 people Sunday, July 14, 2019, on the west side of the Hutchcraft Building at 104 N. Willis St.

“The mural is a tribute to Hilma Yates, a Heyworth area resident, a teacher in the local schools, and an active library board member,” said Thomas Haynes, the president of the Heyworth and Randolph Township Arts (HeART) Council, who coordinated the project.

Yates died in 1995, but in 1987, she started work on designing a hook rug made from hand-dyed wool strips.

“Her hooked rug is an historic depiction of the railroad era in Heyworth and was adapted from photos in the Heyworth community’s bicentennial history book,” Haynes said.

The rug took almost two years to complete, but served as the inspiration for the outdoor mural piece. The mural includes a depot, a school building, two train tracks, an elevator and two horses attached to a carriage.

“We started work on this in November of last year, but had to reach out to find some artists and we found some great ones,” he added. More than a dozen local artists participated on the project.

“They range in age from 10 to 70 years old,” Haynes added. “They range from local students to others who are retired.”

Colin Norsworthy, 16, of Heyworth, was one of the artists who got involved.

“I have a passion for art and enjoyed doing some of the sketches that we started out with and I think the finished product looks amazing,” he said.

Rachel Maas, 17, of Heyworth, also enjoyed contributing. It was the third mural for the HeART Council.

“I worked on one of the other murals and I just wanted to help and I really enjoyed the differences in the age groups,” she said. “With the first murals, it was more of a younger group with a lot of high school students involved. This time, we had some older people and it made it a lot more fun and much more of a learning experience.”

Nikki Bussan, an art teacher at District 87, said the final result helped beautify the downtown area and helped the younger students learn what is involved in such a major project.

“Everybody wins with this, and I was just glad I could help out,” she added.

The HeART Arts Council is a not-for-profit arts council that supports artists and the local community in providing access to art-related activities, events and art production, Haynes said. An art show is scheduled for the fall and other projects are already underway. Grant support for the project was provided by the Illinois Prairie Community Foundation and a donation from D. Patel and the Heyworth IGA.

Top photo caption: Thomas Haynes, the president of the Heyworth and Randolph Township Arts Council, describes the work of local artists for Heyworth’s newest downtown mural, The Depot Mural, a tribute to Hilma Yates. Yates, a former educator, was well known for her quality hooked rugs, one of which inspired this mural, which was unveiled Sunday, July 14, 2019.