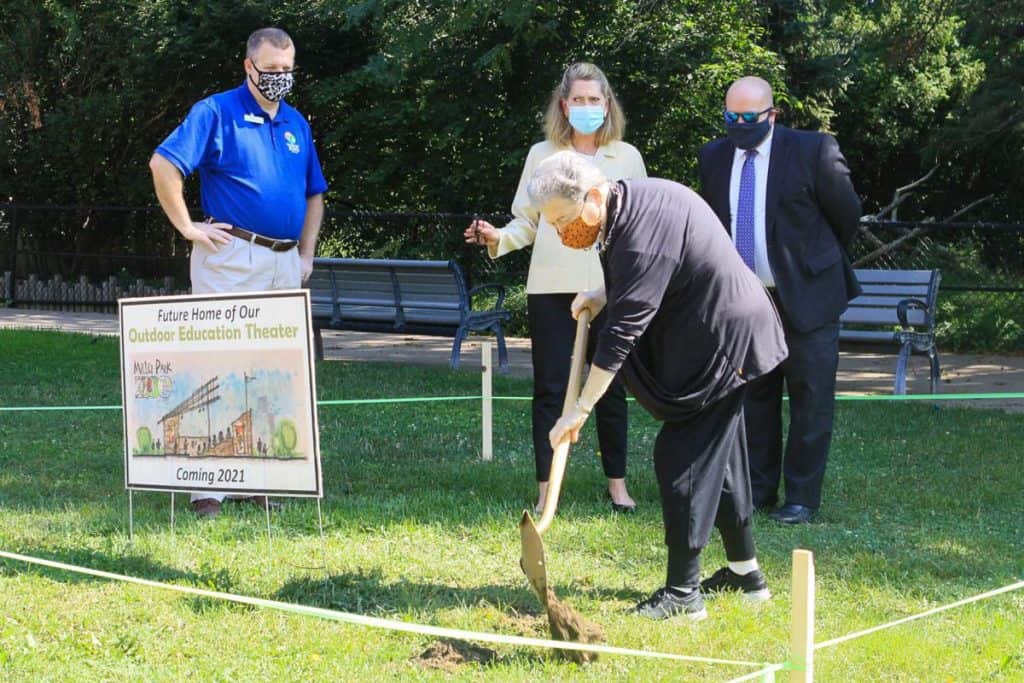 Reposted from The Pantagraph and WGLT

By Timothy Eggert and Sarah Nardi; Photos by Jim Finch

The center — to be named the Sullivan Rohrscheib Educational Theater — will function as a long-term replacement for the Rain Forest Theater, which is set for demolition because it sits where officials plan to build a new South America exhibit.

“It also will be more than that — we can do more things here than we can up there. Those things are like talks and videos and even weddings and receptions,” said Jay Tetzloff, director of the city-owned zoo and the Bloomington parks, recreation and cultural arts department.

“And anything else we can come up with that will hit those education, conservation and fun — the main parts of our mission,” Tetzloff said. “This will really help us do that.”

Markings for the new center place it in an existing grassy section between the carousel and wolf exhibit and adjacent to the ZooLab, eagle, hawk and red puffed lemur enclosures, on the zoo’s north end.

A rendering on display Wednesday shows a simple, open-air design with stage and seating sections consisting of natural materials. The center will feature a total capacity of 25 people and updated audio-visual equipment.

The new theater will be funded in large part by a donation from a memorial fund created in honor of Sullivan Rohrscheib. Sullivan was born with a congenital heart defect and lived for only 40 minutes. His father, Josh Rohrscheib, said the fund was created as a way to bring joy to children in the community. He hopes the Sullivan Rohrscheib Education Theater can do exactly that.

And to make things even more joyful, Miller Park Zoo will offer free ice cream to all children every year on June 30 — in celebration of Sullivan’s birthday.

“The current Rain Forest Theater really is just a heightened, it’s barely a stage, there’s some wood benches up there,” Tetzloff said. “This is gonna have AV capacity so we can run videos even if we’re not doing a talk, we can have people sit down and watch videos that we create … it just gives us more opportunities.”

Tetzloff called the future building a “challenging project” because officials had to design it within an existing footprint and take into account building material costs inflated by the coronavirus pandemic.

All in all, the project will cost $98,734, according to a site plan review dated July 19 and approved this summer by the city.

But that figure won’t come out of the city’s or taxpayers’ pockets, as the project is funded entirely through private donations collected by the Miller Park Zoological Society.

“A zoo wouldn’t survive without community support,” Tetzloff said. “Not having to worry about the budget from a city perspective, the support is crucial for our survival for this community.”

The De Brazza’s Monkey exhibit is expected to open in mid-July, and zoo officials expect to break ground this fall on a new South America exhibit that will feature three different animals — Giant Anteaters, Galapagos Tortoises and Bush Dogs.

Demolition of the Rain Forest Theater will take place this winter, after officials break ground this fall on the new South America exhibit that will feature three different animals — giant anteaters, Galapagos tortoises and bush dogs.

That $1 million project is being funded through a $750,000 grant from the Illinois Department of Natural Resources and a $250,000 check from the MPZS.

It will be placed near the south end of the zoo, meaning the Eurasian eagle-owls, red panda and Pallas cat exhibits will also be torn down and the animals moved to other parts of the zoo. The full exhibit is expected to be completed in 2023.

Zoo officials next month plan to cut the ribbon on the De Brazza’s monkey exhibit, which was set to open in July after building started in October 2020. Tetzloff on Wednesday said the zoo ran into some construction-related delays.

The new monkey exhibit is adjacent to the new education center. It will house two De Brazza’s monkeys — a medium-sized primate with an olive green coat and distinguished white beard — and two red-flanked duikers, a small antelope species.

Illinois Prairie Community Foundation serves as fiscal sponsor for the Sullivan Rohrscheib Memorial Fund. If you would like to support the fund’s mission of funding projects in our community that bring joy to children, donate online.