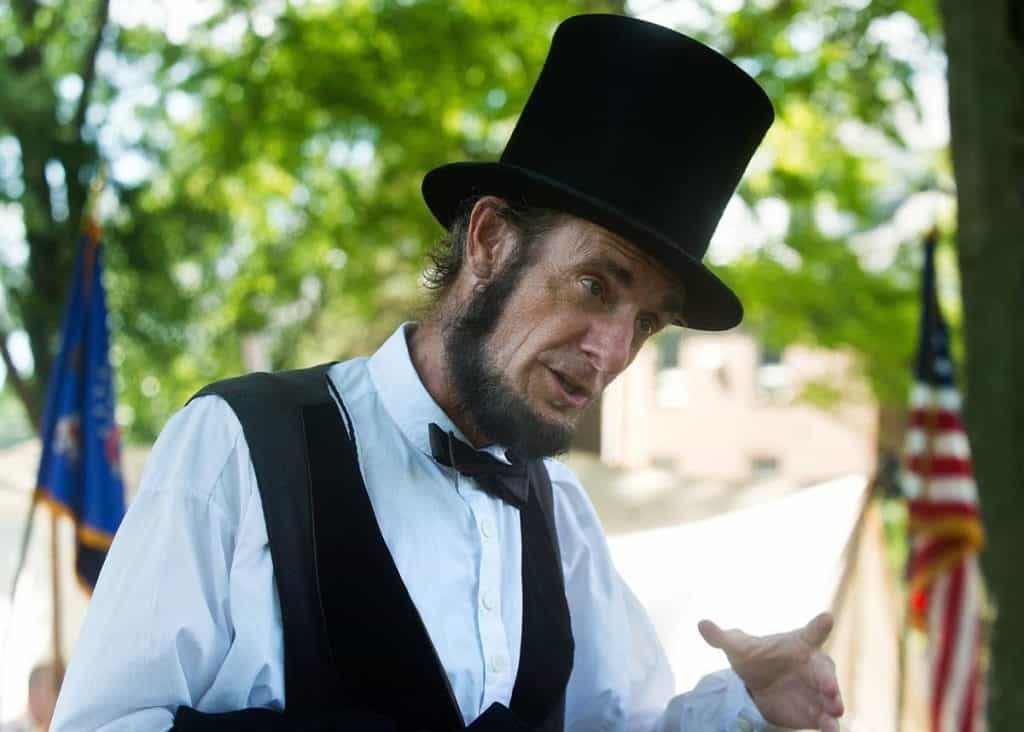 The 10th Illinois Cavalry set up camp on the lawn at Ames Library on the Illinois Wesleyan University campus to give a demonstration of Civil War military tactics.

Nurse Hannah Ropes asked passersby if they had any ailments that needed tending because she was set up to help.

“Every soldier at least once had dysentery or diarrhea so we plugged him up as best we could with some colloids,” said the nurse portrayed by Jo Grayson. “If you had a headache, bellyache, female problems, what they would give you was something called blue mass and it’s 33 percent mercury — does the trick, though.”

Eight-year-old Tesla Shaw listened and learned about the Civil War era medical practices, but her favorite part was meeting the horses.

She and her mom, Colleen Shaw, immersed themselves in the camp, asked questions and were able to meet Abraham Lincoln — or at least a convincing impersonator named Kevin Wood.

“We just were happy to brave the heat to be able to experience this. It only happens once a year; it’s a great way to introduce history to my daughter,” Colleen Shaw said. “There’s not very many opportunities like this to experience living history.”

The festival continued on Sunday with more Lincoln appearances, talks and activities.

The heat index rose above 100 degrees, cancelling two of the 1850s-style baseball games that were scheduled in the afternoon. However, festival-goers still roamed from venue to venue finding new pieces of history.

Garrie and Avis Atkins rode the trolley through the city, listened to a talk about Lincoln and the railroads and made sure they were in the audience when the cavalry demonstrated a military skirmish.

“It’s a piece of history that you don’t get anywhere else — what a treasure it is,” Garrie Atkins said.

Avis said they like to come to the festival every year because they enjoy gathering with others to learn, adding that it’s a good opportunity for kids to see history unfold firsthand.

The festival also offered one of many classic car cruise-ins along the historic Route 66.

Dozens of classic cars from nearly every decade took over downtown Bloomington throughout the afternoon for the cruise-in hosted by the Mid-State Cruisers.

Frank Heineke of rural Carlock only puts about 2,000 miles on his 1966 Chevrolet Chevelle SS each year.

Starting in May, he frequents several car shows along Route 66, making sure to keep the Chevelle out of the rain.

“We just take off to small towns from Springfield to Delavan to wherever and go to shows,” Heineke said.

Joe and Linda Walsh brought out their 1957 Chevrolet 210, complete with a drive-in tray attached to the window marking the car as theirs.

As members of three local car clubs including Mid-State, it’s a no-brainer that they attend every year, Joe said. This year he also volunteered to be the DJ for the show since the band had to cancel.