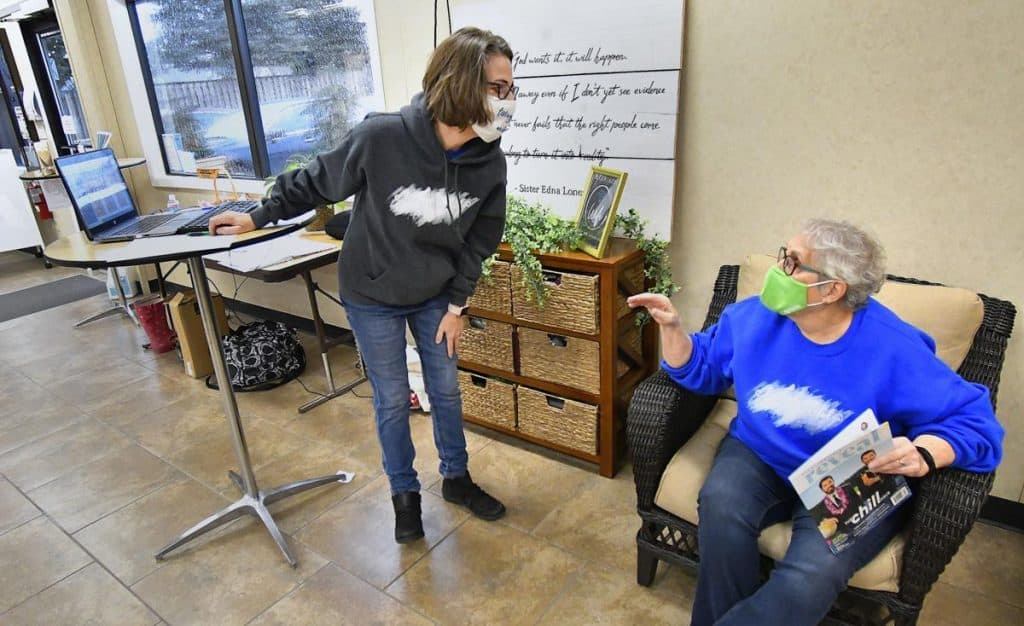 BLOOMINGTON — A “matter of milliseconds.”

That’s how Carol Kalmes, 74, describes the process of snagging an appointment for the COVID vaccine online.

It’s something Kalmes, a retired teacher, learned through trial and error — a learning process she feels lucky to have navigated, given that not every adult 65 years and older is as comfortable or as quick with technology as she is.

She first tried signing up via the McLean County Health Department, then decided to consider a retail pharmacy instead. Using her smartphone, Kalmes prepared information for Hy-Vee’s signup process before midnight, when the calendar would show openings.

After successfully landing appointments for herself and her husband, Kalmes helped sign up friends several years older than her — a demographic that’s among the most at risk for COVID-19 complications and one that she and others told The Pantagraph is at risk of being left behind in a largely online-based system.

Kalmes said she doesn’t believe “it’s such a bad thing to be doing” when she uses her knowledge to sign up other seniors, but added that at times, she feels “a little guilty.”

“But then I think, ‘Well, who’s advocating for that age group? Who’s taking care of them and making sure they get an equal opportunity to get these vaccines?’”

That was also Barb Whiteman’s thought, which prompted her, too, to look into helping seniors sign up for the vaccine.

“They’re just, I don’t want to say scared, but a lot of them can’t navigate the computer … or are afraid to put information out on the internet,” Whiteman said.

As the founder of Living Well United, a senior center in Le Roy, Whiteman is in a position of trust, which is how she ended up signing 16 people up for vaccine appointments.

The sign-up process for MCHD requires fewer personal details than the process for retail pharmacies, so the people Whiteman signed up were “fine giving me what was required.”

The people Whiteman signed up were taken to Grossinger Motors Arena on their appointment day, the inaugural trip of a van donated to the senior center by State Farm in January. It’s led to her phone “blowing up, which is great.”

Whiteman said she contacted MCHD to see if there was interest in formalizing some sort of program program that would give volunteers the work that people like Whiteman and Kalmes have done for the seniors they know.

So far, she said, she hasn’t heard back, but she knows workers there “are swamped.”

MCHD told The Pantagraph in a statement that area “social service agencies … have expressed an interest in offering in-person volunteers to assist seniors within their diverse groups as well.”

While not specifying what was upcoming, MCHD said in its statement that the department “is in the process of setting up the necessary logistics to safely and equitably distribute the vaccine in more community centers across McLean County.”

In the meantime, children, caregivers, friends and people like Kalmes and Whiteman will continue to serve as intermediaries between the seniors who need help and a largely-online vaccination system.

It’s an act that signals something beyond medicine, Whiteman said.

“It’s the fact that we want to help them. We know this is a scary time,” she said. “We want to give them a virtual hug and let them know we’ll take care of them, not just now, but after all of this. More than just the shot — it’s the outreach to let them know we care.”

Living Well United received a 2020 General Grant from IPCF for weights to be used in exercise programs and to hold a Senior Prom once COVID restrictions are loosened.

If you would like to help fund more programs like this in the community, donate online to IPCF’s Annual Campaign which funds to General Grants.