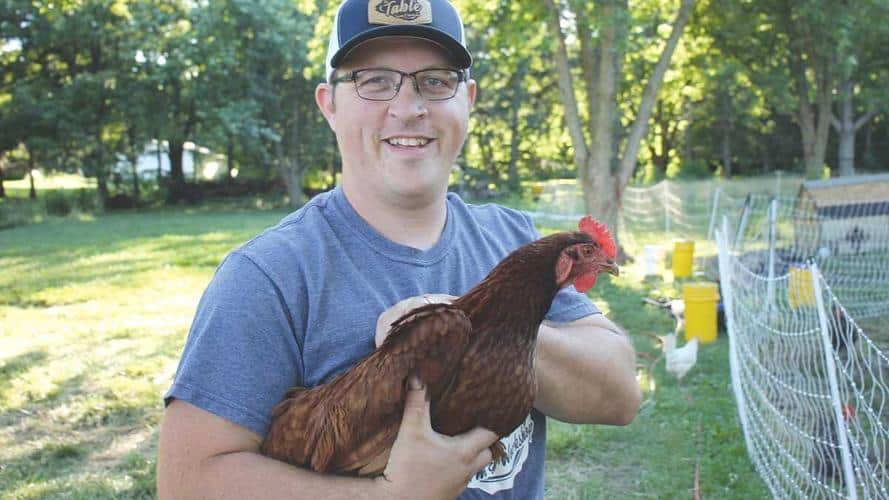 Story and Photos By D. Jack Alkire, unless noted

Kyan Glenn knows the kind of people he wants to feed with the produce grown on his small farm outside Bloomington.

People who struggle to make ends meet. Who might work 80 or 90 hours a week and still not know security. Who turn to frozen or prepackaged food out of necessity, but never feel full even after their plates are empty.

“I’m really highly motivated to feed those people because I come from those people,” said Glenn, owner of The Table Farm and Workshop.

His donations to the food co-op run by Home Sweet Home Ministries are part of a homegrown movement to end food insecurity in Bloomington-Normal. Nonprofits, government bodies, faith-based organizations and individual volunteers are working to feed the community through a variety of means: pantries, community gardens, produce pickups and other types of donations.

Tremendous energy fuels these efforts. But the need may be even greater: Over 15,000 McLean County residents experienced food insecurity in 2020, according to estimates from Feeding America, a national food bank network.

With soaring inflation and gas prices, the cost of putting food on the table is rising — and so is the need for help across the country. A recent survey found that 80% of food banks reported either an increase or steady demand for emergency food services, according to Feeding America. More than 53 million Americans sought such help last year.

Beyond rising costs, access to food also presents a challenge for some. Parts of the community, most notably west Bloomington, are considered a “food desert,” meaning residents don’t have easy access to a supermarket or large grocery store.

“I feel like, in Bloomington, the need would always be there unless something drastically changed,” said Caroline Bubulka, director of school nutrition for Bloomington District 87.

Growing up in Chicago, Glenn said, his family often struggled, even though his father worked long hours to provide. “We had a house,” he said, “but barely.”

As a result, Glenn’s diet then was a long way from the leafy greens and vibrant vegetables that now fill his table at the Bloomington farmers market.

“When you grow up really poor, you end up eating a lot of Wendy’s,” he laughed. “That stuff is so nutritionally empty.”

That’s to say nothing of the disease and complications associated with unhealthy eating.

Researchers at the University of Washington’s Institute for Health Metrics and Evaluation studied the health impact of diet in 195 countries. Among their findings: Worldwide, poor diet was linked to 11 million deaths in 2017, with 9.5 million of those from cardiovascular disease. Many people eat far more sodium — and far fewer fruits and whole grains — than recommended.

On Glenn’s farm, the produce is “certified naturally grown,” a designation awarded by other farmers that requires avoidance of synthetic herbicides, pesticides, fertilizers or genetically modified organisms.

He said there’s a tangible difference when compared to convenience foods. “You can eat my food and be full for multiple hours,” he said.

Glenn sells his produce at a premium at the farmers market and through a community supported agriculture (CSA) program, which allows consumers to “subscribe” to regular boxes of produce. But he said profit is not his priority.

In addition to helping stock Bread for Life Co-op, Glenn is among the local growers who feed the hungry through a volunteer effort called the Veggie Oasis.

Here’s how it works: Every Saturday, as the Bloomington farmers market winds down in Museum Square, volunteers from West Bloomington Revitalization Project collect donations from vendors with leftover produce. The volunteers bring the food to the corner of Washington and Allin streets, where anyone can take some for free.

“It’s a great way to provide nutritional value for the community,” said volunteer Karla Kossler of the effort, which has been going on for eight years. And it helps farmers too, mitigating waste and lightening the load after hours in the hot sun selling their product.

“It’s super convenient because, at the end of market, we don’t have product that needs somewhere else to go,” said Chelsea Meiss of Cook Farms.

While access to a variety of larger grocery stores remains lacking on Bloomington’s west side, several organizations are working to fill the gap.

Sunnyside Community Garden and Food Forest on West Illinois Street has distributed thousands of pounds of fresh produce to the community since it opened in 2016.

“We give food to about 400 different families on the west side each year,” said director Caleb Phillips, wiping the dirt from his hands on a recent summer day. Around him, young apprentices — who are allowed to take food from the garden in addition to their pay — mulched various vegetable beds for turnover.

The nonprofit, operating under the Illinois Prairie Community Foundation, hosts “pop-up market” events that allow customers to pay what they can. Sunnyside donates to Bread For Life Co-op, Eastview Christian Church and Center for Hope. Phillips also sells produce through the online delivery service Market Wagon, a venture that helps fund the apprentice program.

Using the Market Wagon revenue as a guide, Phillips can estimate a dollar figure for the garden’s value to the community: “The total price of the food that we give away is, roughly, about $15,000.”

Another key resource is Western Avenue Community Center, which distributes about 80 free food boxes each month through a program funded by the Tinervin Family Foundation.

The boxes contain food that any family would use daily, such as canned vegetables and fruits, pasta, cereals, rice, beans, cans of chickens and tuna, sweets and snacks, said Martha Saldana, food program director at the center. Thanks to sponsored grants, extras such as spices or proteins are added monthly.

This year, the center also partnered with the West Bloomington Revitalization Project on a new community supported agriculture, which provides fresh produce boxes to 48 westside families. Families enrolled in the program receive a box, filled with produce from Cook Farm, once a week from mid-June to mid-November.

Participants in the CSA must live on the city’s west side, but organizers say the need extends well beyond the neighborhood.

“We have a lot of people who are interested in the program that don’t live in west Bloomington,” said Kristen Buhrmann, president of WBRP. The organization is seeking to expand the program through grant funding.

Hope comes in many forms. At Midwest Food Bank, it starts with an 800-pound bag of Apple Jacks cereal.

Volunteers at the Normal nonprofit divide this bounty — which the food bank can recover because of its Illinois salvage license — into snack-sized individual bags. These become one component of “Hope Packs,” bundles distributed to thousands of McLean County children to ensure that those who qualify for free lunch at school during the week still have food to eat over the weekend.

And there are many children in need, according to data from the Illinois State Board of Education. Over half of the students in Bloomington District 87 live in low-income households, meaning they meet federal guidelines for free or reduced lunch, are receiving public aid or are living in substitute care. Nearly a third of McLean County Unit 5 students meet those criteria.

Both school districts offered free meals to anyone younger than 18 on weekdays during the summer, an effort funded by the U.S. Department of Agriculture. The districts provided food at several elementary schools, and District 87 took the further step of conducting mobile feeding stops at a few churches and other locations.

“A 5-year-old is not going to be able to go, purchase food, go home and cook,” said Bubulka, the District 87 director of school nutrition. “So we do that for them.”

A fall 2020 survey of over 195,000 college students found that 39% of students at two-year institutions and 29% of those at four-year institutions had experienced food insecurity in the past 30 days. The survey was conducted by Temple University’s Hope Center for College, Community and Justice, which studies whether college students have access to basic needs like housing and food.

It was a recognition of this growing need that led to the creation of the School Street Pantry in Normal, said Doris Groves, board chair.

Since 2018, the pantry has been open to all college and trade school students in the Bloomington-Normal area, Grove said. Students must bring their school ID and can visit as often as they need. The pantry has canned goods, produce, toiletries, refrigerated items like milk and eggs and frozen foods.

During the school year, about 100 students a week seek the help. “We try to make it as least stigmatizing as possible,” Grove said, noting that the bag students use has a logo but no wording to indicate its association with the pantry. “It’s generally a good experience.”

Dorothy Deany’s desk overlooks the garden at the corner of Chestnut and Center streets. She is the vice-president for the St. Vincent de Paul food pantry in Bloomington, a subsidy of Eastern Illinois Food Bank.

The pantry serves about 250 families every Monday, Deany said, but some of their most important customers live right next door in Phoenix and Lincoln Towers.

“We pack up food in the truck and we take it over there,” she said, as many of the residents are older adults and people with disabilities.

Eligibility is based on federal poverty guidelines and family size. Deany said the pantry receives monthly donations from individuals in the community as well as from businesses like Jewel Osco, Fresh Thyme and Target. She said they do take fresh produce donations, but the on-site garden is crucial.

Fresh produce remains a key part of the efforts at Midwest Food Bank, which distributes millions of dollars of food each month to pantries and other nonprofits. Ingham, the executive director, said it receives and distributes about 7,000 pounds of fresh produce each month.

The organization saves money by buying in bulk and relying on volunteers — about 7,700 annually — as well as donations from local grocery stores.

“Every dollar we get we can provide $30 worth of food,” she said, surveying the hundreds of pallets of non-perishables and household items neatly stacked three-high in the Normal warehouse.

One of the organization’s programs, Tender Mercies, distributes packets of par-boiled rice and beans to help people who only have a microwave. “It’s low-cost, but it’s a mighty ally in (fighting) food insecurity.”

Perhaps it speaks to the deep-rooted nature of food insecurity in Central Illinois that even with so many volunteer hours, acres of urban garden and tons of donations, the problem continues to persist.

None of the organizations interviewed for this story reported a decrease in demand — some quite the opposite.

Committed as he is to helping feed the people whose hunger is so familiar to him, Glenn sees the problem as one much larger than individual solutions could resolve.

He sat in the shade on his farm, leaned forward in his chair and sighed.

“The people that need help the most … in American systems today are the furthest from it,” he said.

He said the structure itself — the process by which food is grown, processed and made accessible — needs to change. “But no one wants to change the structure.”

Illinois Prairie Community Foundation serves as fiscal sponsor for the Sunnyside Community Garden and Food Forest. If you would like to support the fund’s mission of providing fresh, organic produce to low-income families in West Bloomington and facilitating learning opportunities for children and adults through gardening, harvesting, and marketing food grown on site, using sustainable practices., donate online. https://www.paypal.com/cgi-bin/webscr?cmd=_s-xclick&hosted_button_id=QDH82LR6BYCZA

Top Photo Caption: Caleb Phillips, second from right, helps apprentices remove lettuce that has already bolted and must be composted at Sunnyside Community Garden and Food Forest in Bloomington.

If you are facing food insecurity — like thousands of people in Bloomington-Normal — here’s how to connect with the resources mentioned in this story.

Want to help? Each organization details donation and volunteer opportunities on its website. You can also donate to the Midwest Food Bank, which helps a number of area pantries and organizations. Visit midwestfoodbank.org.

Veggie Oasis – Noon, every Saturday while the Bloomington Farmers Market is in season