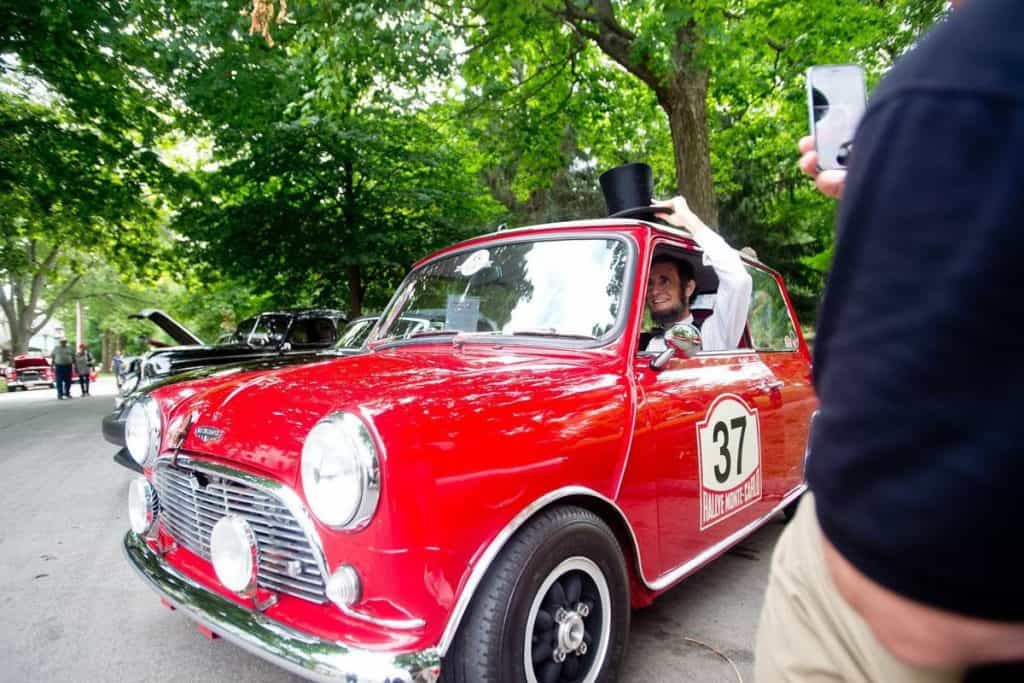 BLOOMINGTON — He had to remove his stovepipe hat, but Abe Lincoln was able to fold himself into the front seat of a 1976 Mini Cooper on Saturday, July 21. 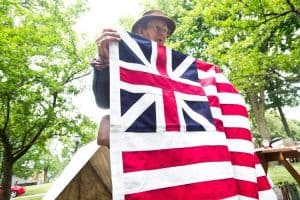 Gary Simpkins, of Heyworth, shows off a replica of a Civil War-era flag Saturday, at the 10th Lincoln’s Festival on Route 66 on the Illinois Wesleyan University Ames Library lawn.

Portrayed by Kevin Wood of Oak Park, Lincoln was the guest of honor during the 10th annual Lincoln’s Festival on Route 66 in Bloomington.

“I’m here to celebrate my connection to Bloomington and McLean County. I spent quite a bit of time here back in my day,” said Wood, in character, as he judged antique cars at the Bloomington-Normal Mid State Cruisers car show in Franklin Park.

“I hope this event will inspire the people of Bloomington-Normal and McLean County to think of their local history and how it contributed to the history of our nation,” said Wood.

Brian Davis of Bloomington, owner of the Mini Cooper, said living along Route 66 and in a community with connections to Lincoln “gives our town more historic significance.”

“I’m glad to see Bloomington pick up on more of its heritage, both on Route 66 and through Lincoln. This festival is a great addition to the community,” said Davis.

Thousands of visitors were attracted to the event, with locations at Franklin Park, the Illinois Wesleyan University Ames Library lawn, the McLean County Museum of History, David Davis Mansion and Bloomington Public Library. 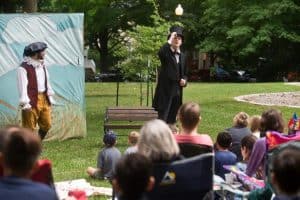 William Shakespeare portrayed by Christopher Jenkins, left, and Abraham Lincoln portrayed by Jack Hradecky act out a scene during the Illinois Shakespeare Festival’s performance of “Double, Double” as part of the 10th Lincoln’s Festival on Route 66 at Franklin Park, Bloomington.

“We’re very fortunate to have so many Abe Lincoln connections here. Many of his Bloomington friends are what helped push him towards the presidency. I think we’ve always been attracted to that,” said Barb Adams, director of the festival committee.

New this year was a partnership with the Illinois Shakespeare Festival with a Lincoln-themed play, “Double Double,” presented on Saturday.

Friday night, Joe Vitale of Bloomington noticed several Civil War re-enactment soldiers setting up a camp near IWU Ames Library. He stopped to chat with the history buffs around their camp fire.

“It’s interesting to see how things were different,” he said Saturday, watching a Civil War skirmish with his wife, Laura, and three sons.

“Lincoln was our greatest president because he helped stop slavery,” said Brayden Vitale, 12.

Gary Simpkins, owner of the Simpkins Military History Museum in Heyworth, dressed as a Confederate soldier and shared pieces of history with visitors.

An assortment of antique items were spread on his camp table, including replicas of Civil War flags, other instruments from the era and a copy of the U.S. Constitution. 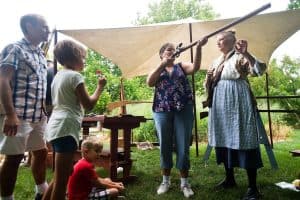 Shawn Bailey of Bloomington, center, holds a weapon with guidance from Mary Schoneman, right, at the 10th Lincoln’s Festival on Route 66 on the Illinois Wesleyan University Ames Library lawn. Looking on is Shawn’s husband Rob, and their children Hannah, 9, and Ethan, 7.

“I want to enlighten people and encourage them to take time to read their country’s history, through the Constitution and Declaration of Independence,” said Simpkins.

Rob Bailey of Bloomington watched a demonstration about Civil War weapons with his wife, Shawn, and kids, Ethan, 7; and Hannah, 9.

“This is our first year at this event. We were drawn to all the fun events with an element of learning. We’re very fortunate, for a town this size, to have such great cultural events and festivals like this,” said Bailey.

At nearby David Davis Mansion, Carol Baker of Bloomington strolled through Sarah’s Garden with her family. Baker volunteered at the event before joining her family.

“It’s so interesting that Lincoln didn’t want to run for president, but David Davis was instrumental in his election,” said Baker. “That happened right here, in our town. It’s a piece of history we should be proud of.”