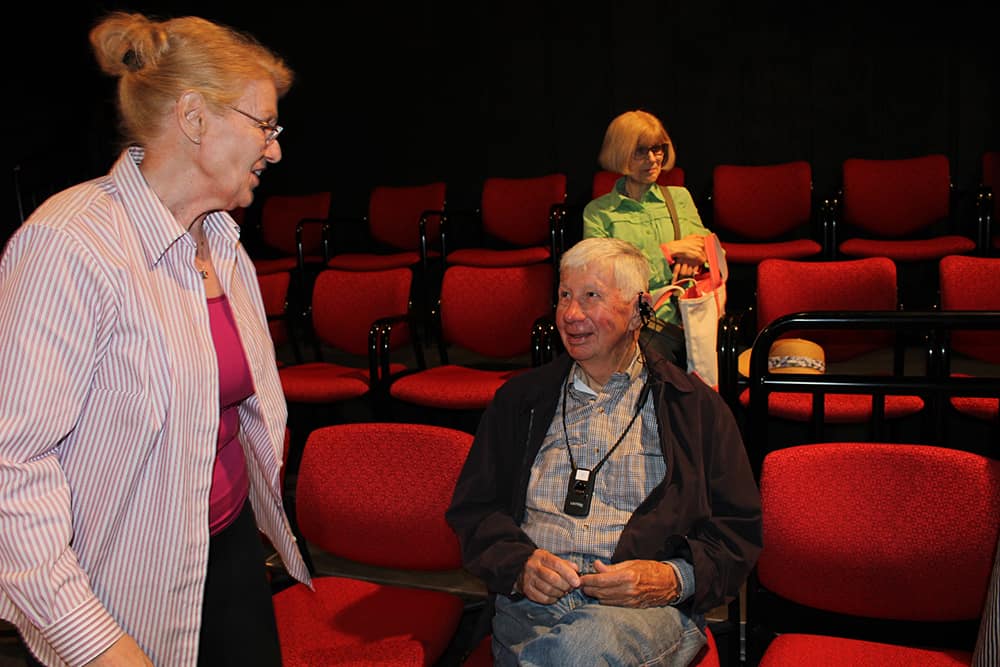 On May 22, Heartland Theatre Company unveiled its latest production – an assistive listening system – thanks to a 2017 Mirza/Arts and Culture Grant from Illinois Prairie Community Foundation and a targeted fundraising campaign.

Gail Dobbins, Heartland Theatre Managing Director, debuted the system for its board of directors and donors to the system. “We started to hear that patrons couldn’t hear (during plays) and wouldn’t be coming to productions anymore,” she said. “It just broke my heart.” 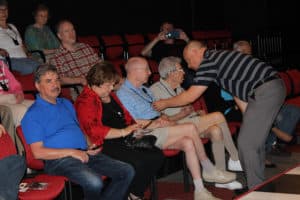 Knowing that the number of patrons who can’t hear well is growing at Heartland, Dobbins applied for a grant from IPCF and received $4,500 to purchase the equipment from Listening Technologies Inc. Because the theater did not already have a microphone system with a sound mixer that was necessary for the assistive listening devices to work, the expense of adding that equipment would double the cost.

So, Dobbins launched a targeted fundraising campaign to 35 of the theater’s patrons who generously donated the additional $4,500, plus an extra $2,500. The extra will be used to purchase more units if necessary and to maintain the system in the future. Currently, the theater has 12 listening devices, but could double that if the need arises.

At the unveiling of the assistive listening system, about 25 patrons of Heartland Theatre were introduced to the system. Any patron who needs amplification can pick up a unit on the way into the theatre. Included is a receiver and a set of earphones that fit over the ears.

For those who already wear hearing aids, the receiver can be synced to broadcast directly into the hearing aids. For those who don’t wear aids, but require amplification, headphones can be worn. Dobbins suggests patrons bring their own earbuds which work with the system and fit more snuggly to a user’s ears. 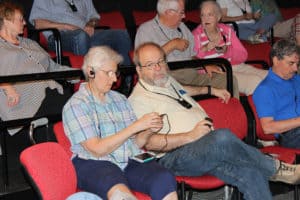 The receivers pick up radio frequency from around the theater allowing patrons to sit wherever they want, not just in any one specific location. “We didn’t want to make people switch from their favorite seats or label people by having a specific area for assistive device use like in some theaters,” said Dobbins.

Members of Young at Heartland program presented three mini-productions at the test event so patrons could experience the assistive listening system. While there was some tweaking that needed to be done with specific users, all agreed the system was a success.

Heartland Theatre board member Bruce Boeck and his wife Diane were in attendance for the unveiling. “It was rather impressive,” said Bruce, who wears hearing aids. “I went way back in the back and behind the stage and it was very good, very clear. This was a good purchase.”

Diane Boeck agreed. While she doesn’t wear hearing aids, she admits the amplification devices will help her during performances. Noting that she recently had her hearing checked, she shrugged and said her hearing loss is age-related. Diane found the earpieces provided didn’t fit her ears well, so she’ll be bringing her own earbuds to the next performance. 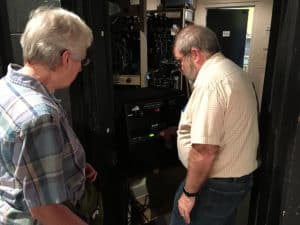 Jared and Judy Brown also were impressed by the system. Jared, who wears hearing aids, always sits front and center at performances to better hear all aspects of the shows. But, he admitted he didn’t always catch everything if the actors were turned away or off to the side of the stage. After the test of the new system, he was certain the devices would help him enjoy the theater event more.

“We want these (listening assistive devices) to be used,” said Dobbins, who believes more people will attend performances once word gets out about the system. “The worst thing in the world would be to do these amazing performances and not have people hear them.”

“The success of this project would not have been possible without the Community Foundation,” Dobbins said. “Without the initial grant getting this project started, we wouldn’t be where we are today.”