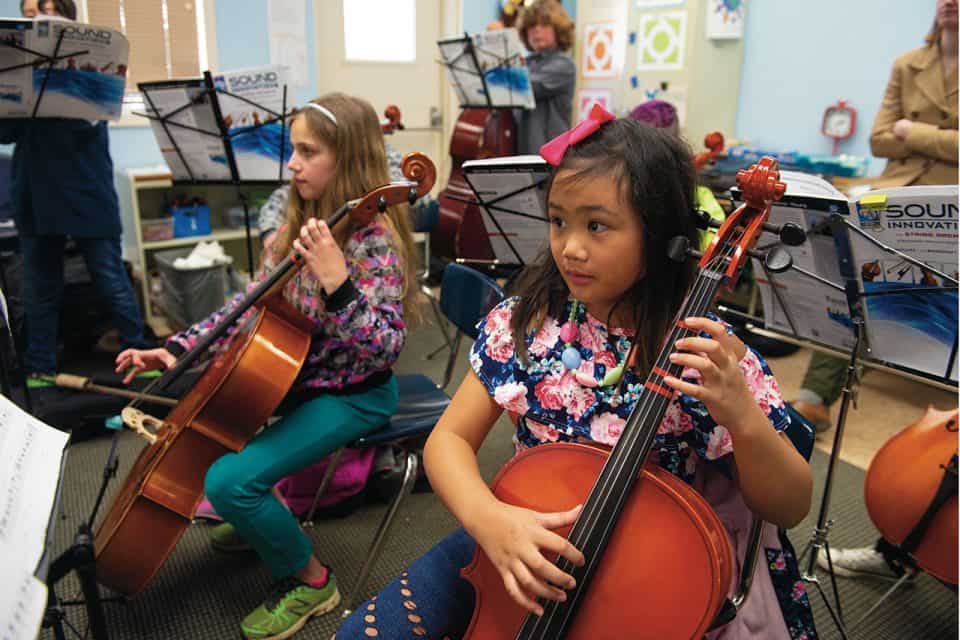 When the fourth grader was told she would have to turn in her cello at the end of the semester, she hugged her instrument.

This was the first time Quiroz, a violinist, had worked with students who needed to be taught how to take their instruments out of the case, and how to get into proper position to play a violin or cello. Quiroz, who hopes to conduct an orchestra someday, was learning too.

“I learned never to underestimate children,” he said. “We were astounded at how fast they caught on to everything. They were just sitting there with their instruments ready to learn. You see the spark, the connection, and when they get something, they get so excited.”

String Project Director Adriana Ransom, an associate professor in the School of Music, was looking for a site in Bloomington-Normal that would be accessible to families who might not have transportation or be able to afford an instrument or private music lessons. She found the Western Avenue Community Center, a social service organization on Bloomington’s west side. The center operates as a second home to low-income and at-risk children, seniors, and members of the area’s Hispanic community.

Western Avenue Director Amy Cottone was thrilled when Ransom asked if the center could host the 12-week class in its all-purpose room.

“I said, ‘You want to reach out to us?’ ” Cottone recalled. “For some, coming to the west side of Bloomington can be a barrier, but it seemed to be in the heart of where they wanted to be.”

The class was taught by Illinois State music education majors and was held on Saturdays so it would be more convenient for parents. The 12 spots filled up quickly with a diverse group of third and fourth graders from across the community. Tuition scholarships were available, along with instruments rented at minimal or no cost. If a student qualified for the free/reduced lunch program at school, tuition was $20. If students couldn’t afford to rent instruments, used instruments, donated to the String Project or purchased with grant funding, were loaned to them. At least half of the students learned to play with free instruments.

Cottone was there for the initial meeting with students and parents, as Illinois State students demonstrated the violin, viola, cello and bass. “It was like, ‘How can you not want to do this?’ ” she said. “Seeing the response of the children and families has just been thrilling. The kids are so engaged, the families are engaged, and the students doing the instruction are amazing. This fits right in with our mission and what we’re trying to accomplish.”

“When she played the violin, she said it sang to her soul. We were hooked. And it’s great practice for the (Illinois State) students who are going to be teachers. I was also glad Lena was taking classes in a diverse environment with students from other parts of the community.”

Home-schooler Charlie Brehm, 9, taught himself to play guitar and piano but was attracted to the sound of the bass at Prelude. His mother, Emilie Brehm, said he loves the class, and it’s not difficult to get him to practice.

“It’s the highlight of his week,” she said.

On-campus classes offer instruction for beginners to advanced intermediate-level string orchestra, as well as private lessons. Music majors teach the classes under faculty supervision. A team of 25 students works with 140 children every week. 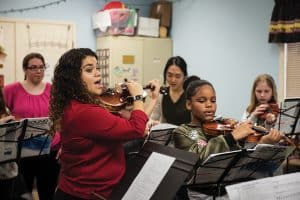 “We want all interested families to be able to participate in our program,” Ransom said. “We’re providing classes to a population that otherwise wouldn’t have been getting strings.”

Prelude also benefits Illinois State students who are gaining confidence as they teach. Violinist Atsuko Masuyama, a senior in music education, was working with the Western Avenue students on their bow technique, which they practiced with paper towel rolls propped on their shoulders. She has been involved with the String Project since her freshman year.

“It’s has been a very enriching experience,” she said. “It was wonderful to see students from a different population. Music is more than a curriculum. Music is a way of life. It’s not only a language but it’s human interaction, especially in the string program. You’re not having just one student play but you’re interacting with other students to shape their music into something beautiful.”

Masuyama was also encouraged by the parents’ involvement. They listen to the students and help clean up after class. The semester ended with the class performing in the annual Spring String Project Concert at the University’s Center for the Performing Arts.

Adriana Lizardi was the lead teacher at Western Avenue. The bilingual graduate student in music therapy arrived at Illinois State from her native Puerto Rico in August 2017. In the initial meeting with parents and prospective students, she explained the program in Spanish as well as English.

Prelude is about more than music, Lizardi said. “We are all from different backgrounds. Having more friends, a musical family is great. We can enjoy making music together. They’re in school learning language, and this is another language.”

Quiroz was hoping to return to Western Avenue when the class resumed this fall. He would like to see the program grow beyond the boundaries of the community. “Seeing how we could accommodate those who don’t have the money really hits you. I would like to see this across the country, and even the world.”

Mike Jones grew up going to Western Avenue Community Center and is now on the board of directors. His home-schooled daughter, Olivia, joined the Western Avenue class.

“I give high marks to the String Project for what they’re doing for the community at Western Avenue,” he said. “The big thing for Olivia and the kids at Western Avenue is the exposure to other kids who are playing a musical instrument and the overall experience of being a part of a team, putting on a concert. It’s a terrific program. What’s been rattling around in my brain for a while was how we can get in touch with some of the untapped talent in kids, and this is one way of doing it. Now we’re able to expose kids to music, and who knows what will come of it?”

The award-winning Illinois State University String Project is an after-school music program that offers low-cost instruction on stringed instruments to children in grades three to eight. The program supports public school music programs and provides a string education to children who are home-schooled or enrolled in schools that do not offer string instruction. The project also provides teacher training for Illinois State string majors. For more information, visit FineArts.IllinoisState.edu/String-Project.

The School of Music has partnered with Heartland Head Start since 2015 to provide violin instruction for preschool children through MusicScores! The free literacy-based program is designed for kindergarten readiness, using music to strengthen focus and improve listening, counting, pre-reading, motor, and social skills. Grant funding and contributions make it possible to offer the program at no cost to families.

Community School for the Arts offers free Redbird Road Concerts for seniors in retirement communities, such as Westminster Village and Blair House. The concerts offer music to seniors who may not be able to travel for concerts, while also offering Illinois State music majors an opportunity to practice their performance skills.