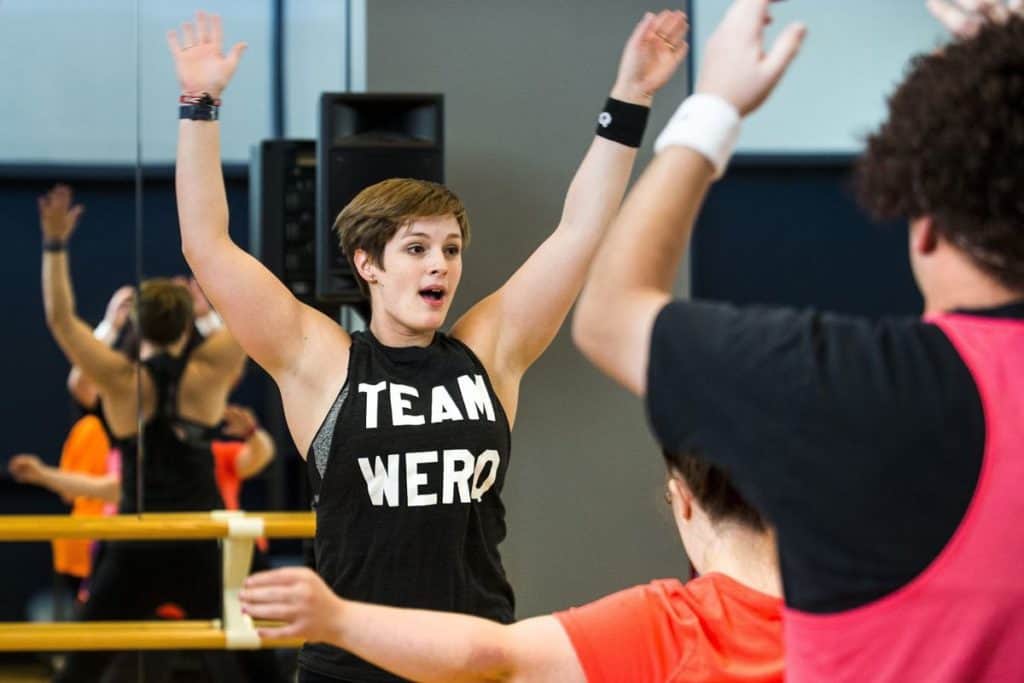 NORMAL — As trending pop and hip-hop dance music played and as an energetic fitness instructor led the way, 14 people swayed, stepped and reached to the music in a group fitness room at Heartland Community College’s Fitness & Recreation Center.

Few had the moves properly choreographed.

No matter. They were moving and smiling.

Welcome to the Werq group fitness class for Homes of Hope residents and staff. Homes of Hope provides housing and 24/7 support in five homes in Bloomington-Normal for 22 adults with intellectual disabilities.

The Werq class is one piece of Homes of Hope’s Heart Healthy Hero Program to improve the health of 19 of the organization’s 22 residents who are overweight.

“I like everything,” resident Ashley Wertz, 35, said after the Oct. 18 evening class.

“I feel like I was just on a treadmill or dancing,” Wertz said. “I’m a good dancer. I always smile.”

“I like it really much,” said resident Leo Harpenau, 50. “After class, I feel good. It’s good for your body.

“They’re not always following the choreography,” Homes of Hope Development Coordinator Holly Phillips admitted with a smile after she and three other staff members joined 10 residents in the class.

Phillips and resident Jeremy Grider, 31, who was dressed as ’80s fitness guru Richard Simmons, teased each other as they exercised. Resident Greg Tiller, 53, and Homes of Hope Executive Director and registered nurse Maureen McIntosh danced with each other.

“I really enjoy seeing the residents having fun,” Phillips said. “That’s what it’s all about.”

Resident Ashley Wertz shows off her tie featuring Blinky from “Pac-Man” as she participates in a Werq group exercise class.

“If they’re moving safely and having fun, that’s fine,” said certified Werq dance fitness instructor Libby Torbeck. “They are having a good time and, since we began doing this six weeks ago, they have picked up on some of the choreography and they are working on their balance and coordination and quality and control of movements.”

Homes of Hope’s 38 full- and part-time employees support 22 residents — who range in age from 27 to 83 — with meal preparation, health care appointments, medication administration and community activities.

“Our overall goal is to provide meaningful opportunities for residents and to encourage optimal independence,” McIntosh said.

Six of the 22 aren’t able to work because they are elderly or because of the degree of their disability. Most residents have an additional disability, such as a hearing, vision or mobility impairment, McIntosh said.

Sixteen of the residents work, either in the community or at the Association of Developmentally Disabled of Woodford County.

Without Homes of Hope, the residents would be in nursing homes or still living with family members, many of whom are aging, McIntosh said. “The advantage with us is they are involved in community living,” she said.

Homes of Hope resident Greg Tiller works on his balance and coordination during an exercise class. “I lost five pounds,” he said.

“There is a part of our brain that lets us know when we’re full,” McIntosh said. “For some of our residents, that part of their brain isn’t functioning correctly. It may be because of a genetic disorder or a physical occurrence that caused brain injury.”

In addition, the residents may not have been taught that weight gain can lead to high blood pressure and diabetes. Some have health conditions that contributed to weight gain, such as hypothyroidism. Some were born with congenital heart disease, which makes being overweight even more dangerous.

“Also, society would gratify some of them with food,” McIntosh said. “It made them happy.”

Some residents with a mobility impairment or arthritis find exercise difficult. In addition, medicine that some residents take for depression and anxiety has weight gain as a side effect.

The Heart Healthy Hero Program started slowly in March 2016, with meetings with staff and residents.

“We were starting with square one with some residents,” Phillips said.

“They didn’t like the words ‘exercise’ and ‘diet,’ so we said ‘health and wellness,’ ‘lifestyle changes’ and ‘healthy eating’,” McIntosh said.

Libby Torbeck, right, leads Homes of Hope residents in a Werq group exercise class. “I absolutely wanted to do this,” she said.

Effective June 2017, Homes of Hope received a one-year, $1,000 grant from the Illinois Prairie Community Foundation to take the program to the next level.

Part of the money was used to develop a produce garden for residents. Part went for the weekly Werq class in September and October.

“I absolutely wanted to do this,” Torbeck said. “I’m honored to do it. It’s a treat to teach wellness to everybody, especially to people who don’t normally have that opportunity.”

In November, the program and grant money switch gears as the Bloomington-Normal YMCA allows residents 100 trips to the YMCA through June 30.

“Our goal is to decrease the weight of participants by 10 percent,” McIntosh said.

“I got into some of my clothes again,” Schneider said. “I lost 25 pounds. I was shocked. It made me happy. I want to fit into an airplane seat so I can go on a trip to Disney World.”

“I lost five pounds,” Tiller said. “I have a good diet. I eat broccoli, cauliflower and carrots. I did lots of water.”

After class on Oct. 18, Grider said “I love it. She (Torbeck) is a great teacher.” He showed a thank-you note to Torbeck that he and other residents signed.

“I love this class and I love Libby,” said resident Mandy Mattingly, 31. “She’s sweet. I love her dance moves. It’s helped me exercise.”

How does Mattingly feel after class?