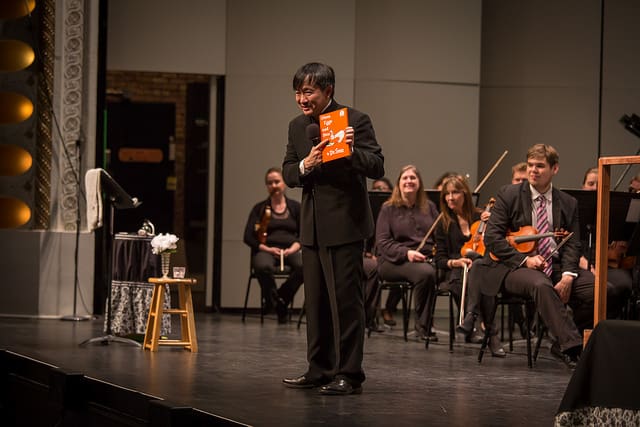 More than 1,500 children and adults from Central Illinois schools enjoyed the silliness of Dr. Seuss’ “Green Eggs and Ham” during a performance by the Illinois Symphony Orchestra at the Bloomington Center for Performing Arts. 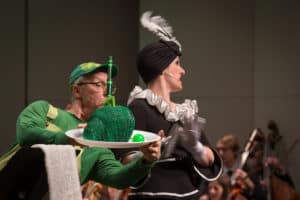 Michael Boudewyns (as Sam-I-Am) asks Kimberly Schroeder (as Madame Theodora Geiselevska) if she would eat green eggs and ham.

The Illinois Symphony Orchestra gave two Concerts for Kids performances in Bloomington on May 4 and one in Springfield the previous day. Each performance combined the classic children’s story with classical music.
View more photos from concert.

The concert opened with a performance of Beethoven’s “Fifth Symphony” after which ISO Music Director Ken Lam asked children what emotions the music made them feel. As an overhead screen projected images of three conductors, each face displaying a different mood, Lam asked the children to match the music to the conductor.

Lam then “discovered” a book onstage – Dr. Seuss’ “Green Eggs and Ham.” After admitting that he had never read the book as a child having grown up in Hong Kong, Lam asked the audience if they knew the story. Nearly all in attendance shouted “yes!” 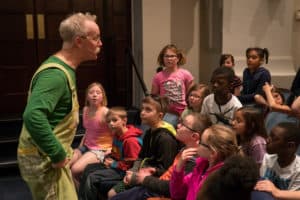 Michael Boudewyns (as Sam-I-Am) interacts with the audience.

For this Concert for Kids, ISO paired with Really Inventive Stuff, a performance troupe which performs family and education concerts with orchestras, conductors and musicians from all around the world.

Founder Michael Boudewyns (as Sam-I-Am) and Kimberly Schroeder (as Madame Theodora Geiselevska) brought the story of “Green Eggs and Ham” to life as the orchestra performed music by Robert Kapilow. Plenty of giggles and shouts of excitement were heard from the audience as Boudewyns and Schroeder performed a silly operatic performance of the book. 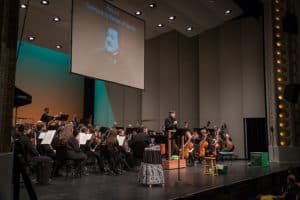 The Illinois Symphony Orchestra ended the concert with a rousing performance of Rossini’s “Barber of Seville Overture.”

The Bloomington Concerts for Kids were sponsored in part through a 2017 Illinois Prairie Community Foundation’s Mirza/Arts and Culture Grant. The $5,000 grant allowed more than 450 low-income children from McLean County to attend the performance at no cost.