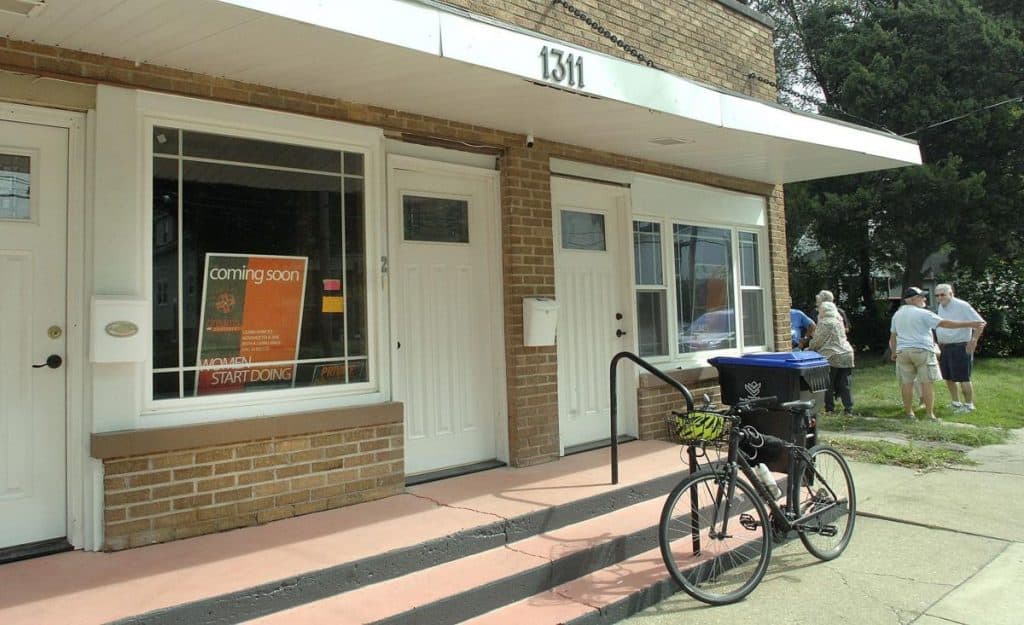 BLOOMINGTON — Gloria McKittrick, her sister Patricia Killian and brother Greg Erickson walked through the former neighborhood grocery store once owned and operated by their great-grandfather and grandparents at 1311 W. Olive St., Bloomington.

“The candy counter was over there … and the cash register and meat cases were there,” McKittrick said of her recollections from the 1950s.

They were referring to plans to turn the vacant first floor of the 1880s grocery store building into a training center where low-income women would learn basic skills to let them determine whether they would wish to pursue a career in the building trades.

“My heart has always been in community service,” said McKittrick, who worked for the Bloomington Housing Authority for 25 years, including several years as executive director.

“I know my great-grandfather would be happy this is occurring,” McKittrick said of A.G. Erickson, the Swedish immigrant who opened the grocery store and operated it for years.

“He felt a responsibility to the community,” McKittrick said of Erickson, who also was a Bloomington mayor.

Called Dreams are Possible, the project is the brainchild of Mary Campbell, a retired social worker from Normal, and Feli Sebastian, a psychologist from Bloomington. Their previous project was Labyrinth Outreach Services to Women to help McLean County women to develop skills so they don’t return to jail.

Women who are struggling financially in McLean County frequently are single mothers who work jobs that don’t pay well. The idea of Dreams are Possible is to provide them with hands-on skills in using various tools and knowledge of the different building trades that would let the women determine whether they would want to apply for apprenticeship programs to become plumbers, sheet metal workers, laborers, electricians or carpenters.

If women work jobs that pay better, they would only have to work one job, meaning they could spent more time with their children, Campbell and Sebastian said.

Using private, donated money, 40 volunteers are renovating the first floor into a training lab, computer room, play area for children and kitchen. About $90,000 is needed to renovate and acquire the building, Campbell said.

The president of the Livingston and McLean Counties Building and Construction Trades Council and the manager of the Illinois Laborers and Contractors Joint Apprenticeship and Training Program facility in Stanford have said they favor the project.

Renovation of the building should be complete at the end of September.  Campbell is going to representatives of the building trades’ unions to recruit volunteers to teach the women.

“I think we can open (Dreams are Possible) in October,” she said.

Meanwhile, Doug DeLong, a Bloomington-Normal-based graphics designer, will attempt to restore the “ghost signs,” the fading advertisements painted on the exterior brick west wall of the building.

“I am a sucker for these signs,” DeLong said, looking up at faded Beich Candies, Erickson’s Groceries and Meats and Gold Medal Flour signs on the west wall of the building.

“I would like this to be visible and readable to people but to not look like it was just done yesterday,” DeLong said. “I’d like to have it done this fall.”

Meanwhile, the lower portion of the west wall, that already was painted over, will be turned into a mural of women holding drills, saws and hammers, Campbell said. The mural will be completed this fall by high school students who are part of the For A Better Tomorrow program, Campbell said.

DeLong likes the Dreams are Possible project and is intrigued by the history of the building and the west-side neighborhood.

“The most fun aspect of this so far has been meeting the Ericksons,” he said.

If you would like to help Dreams Are Possible help women find sustainable employment by providing them with free materials to learn trade jobs, please donate online. If you prefer to make a donation in another manner, click here for information.