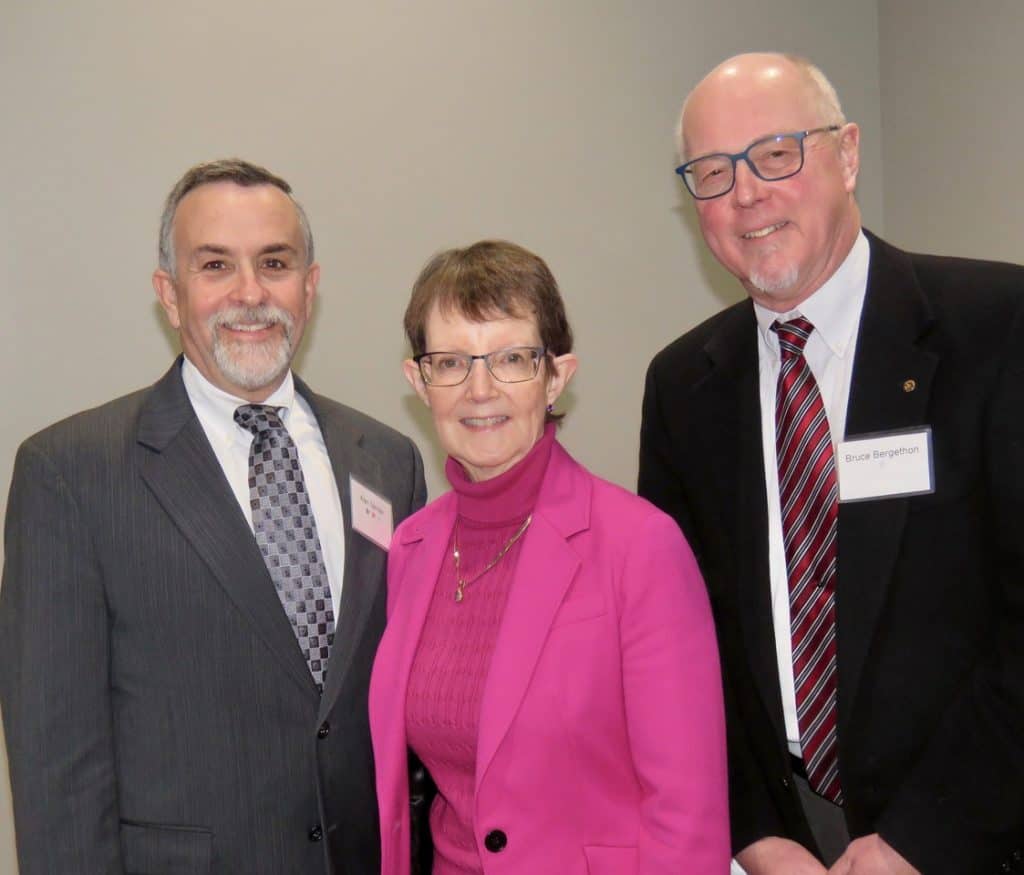 On November 15, 2018, Alan Sender and Beth Robb Sender spoke at Illinois Prairie Community Foundation’s annual Celebrating Local Philanthropy luncheon about the origins of IPCF and what philanthropy means to them in honor of IPCF’s 20th anniversary (Nov. 6, 2018). They are shown above with event emcee Bruce Bergethon (right).

ALAN SENDER: “It is remarkable that we are here today, celebrating philanthropy in general and, more specifically, marking the philanthropy that has been made possible by the Illinois Prairie Community Foundation that didn’t exist 20 years ago. Perhaps most remarkable is that the organization exists despite the fact that, for the first two years of its existence, the financial books and all the checks made to various charities were kept by or written by me and maintained on my personal computer that sat on a desk on our den. THAT was A LOT to overcome.

When Drake Zimmerman, the late Carol Reitan and I gathered to discuss our very divergent ideas for enhancing philanthropy and, specifically, local giving in 1996 – 22 years ago – we melded a variety of concepts without knowing much of anything about community foundations.  Some of those meetings introduced to me the phrase “there’s another two hours of my life I’ll never get back.”

Yet we eventually coalesced around the idea of a community foundation, a construct that had been around since the first foundation was founded in Cleveland back in 1914. It was early on that Carole Ringer joined our group and she later served as the first executive director of the developing foundation.

One problem we had was defining – simply and succinctly – a community foundation. We wanted to link donors to causes they felt strongly about, to the ultimate benefit of the McLean County community.

Examples:  Financial advisers like Drake Zimmerman had clients who wanted to planfully leave gifts to charities. That could be one role for a new organization.

Some charities wanted to create endowments that could support those organizations into the future.

Some individuals would want to use the foundation to make immediate gifts to their favored local or national charities. Others wanted to amass resources which could be used years down the road for those favored charities.

And some donors were interested in causes rather than specific charities and wanted to contribute to an endowment supporting education or the arts or the environment, not just now but decades in the future.

Central to our discussions was the reality that there would be needs in the future that none of us could foresee. And one selling point of the community foundation is that 20, 30 or 50 years down the road, there will be a board of directors that will evaluate the needs of our community and direct charitable gifts where they can do the most good, perhaps to organizations and needs that we never imagined in the late 1990s or can imagine in 2018.

To create a new organization, we recruited Bloomington Mayor Judy Markowitz, Normal Mayor Kent Karraker and County Board chairman Gary Riss to serve as the first board. That provided some instant credibility community-wide.

And in those early years, we attracted a local who’s who to the community foundation, executive directors Carole Ringer, Ruth Ann Fraker, Myra Gordon and today Greg Meyer, and dozens of board members and chairs including former Normal City Manager Dave Anderson who served as the first board chair, succeeded by such luminaries as Barb Nathan, Barry Weer, Steve Timmerman, Rich Stroyan, Tim Leighton, Susan Hoblit, Paul Harmon and Darrell Hartweg.

Thanks to Drake Zimmerman and some of his clients, we had about $300,000 in donor advised funds to manage that first year. Unlike the long-established community foundations in Peoria and Decatur, we didn’t have the benefit of any large corporation willing to underwrite the new organization. Those were lean years; more like starvation years. We struggled to pay the very limited part-time staff and the growth in funds under management was slow – very slow.

But today, the Illinois Prairie Community Foundation is managing $16 million in assets and, while it still has a small staff, we have passed the point where the board has to wonder whether we can meet payroll.”

BETH ROBB SENDER: “We have been so impressed and grateful for the creative philanthropy that has become a hallmark of the Illinois Prairie Community Foundation. I was immediately drawn to the Women to Women Giving Circle and became a founding member. The mission of this circle – to improve the lives of women and children by providing grants to projects and programs aimed at improving the dignity and independence of women and girls – is important to me. The fact that this circle, overseen by its own steering committee, studies the needs of the women and girls in our community on a regular basis before determining the focus of its grants cycle is significant because it assures that we stay relevant and truly work to meet the needs of women and girls.

Alan and I have enjoyed meeting with some of the young people who have gotten involved in Youth Engaging Philanthropy. Their enthusiasm, their self-confidence, their desire to make our community better through philanthropy is palpable. And never have we been more willing to write a check knowing that we were investing not only in their program but in these young people who are our future leaders and philanthropists.

This community has given a lot to us. We have both had rewarding careers, raised a family, enjoyed a high quality of life. So we are making to the IPCF what we consider to be a significant bequest in our wills as a way to give back – though hopefully not too soon. We take a lesson from the late Judge John Scott who died in 1898 wanting to leave money for a Girls Industrial School. But upon the death of his last heir in the 1970s, well, there was no need for a Girls Industrial School, thus triggering a long court case. For us, we know that our gift, whenever it’s made, will be used wisely for needs that present themselves to McLean, Livingston, Dewitt and Logan counties.”

ALAN SENDER: “So while I was very active with the IPCF through what I call its infancy and the toddler years, I have stepped away from board involvement in the Illinois Prairie Community Foundation knowing that there is – and there will be – new leaders and new generations of leaders to take this organization long into the future. I am gratified that Beth and I have the Illinois Prairie Community Foundation available to help us with our charitable giving and to connect us with worthwhile causes that we might not otherwise know about. And I thank all of you, and others who are not able to be here today, for building a structure of substance on that very precarious foundation that came forth 20 years ago.”