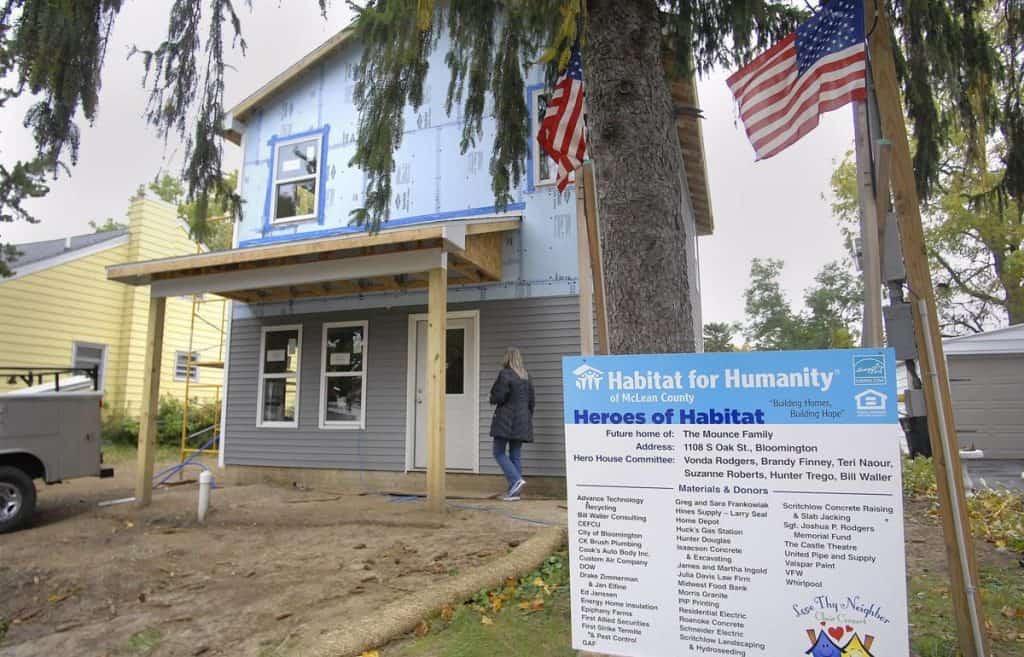 BLOOMINGTON — Construction of the house at 1108 S. Oak St. has gone “swimmingly well,” and the construction manager and a project partner know one reason why.

“There is no house built with more love,” Vonda Rodgers said.

“All age groups of people have been involved with this,” said Bill Waller, Habitat for Humanity of McLean County construction manager.

“It is truly the community building this,” Rodgers said.

Rodgers and Waller were standing in the first Heroes of Habitat house, which is being built for a Habitat family in memory of Vonda’s son, Sgt. Josh Rodgers.

Josh Rodgers, an Army Ranger and Normal Community High School graduate, was killed in action in Afghanistan on April 27, 2017. Rodgers was killed on his third deployment to Afghanistan during a successful raid on an Islamic State compound in eastern Afghanistan.

Earlier this year, Waller came up with the idea to build a house in Rodgers’ honor. He got approval from Habitat Executive Director Jim Walters for a Habitat program to honor a McLean County hero annually by building a house in his or her name.

The first hero honored is Rodgers, and Waller got the support of the Rodgers family.

“The support that we received from the community after Josh was killed in action was overwhelming,” Vonda Rodgers said, mentioning meals for the family and naming the Normal Post Office and a portion of Airport Road for her son.

“Bill and I offered an idea of Heroes of Habitat and shared it with the community and it could have gone nowhere,” Rodgers said. “Instead, people showed up and that’s all we asked them to do … Volunteers and professional services have donated their time, skills and labor and some of the materials.

“And we have a house,” Rodgers said.

Unlike some Habitat projects in which a church or community group sponsors the construction, the hero house involved a cross-section of the community, Waller said.

The two-story, three-bedroom, 1½-bath house is enclosed, work is progressing on siding and mechanicals, insulation and drywall work is next, followed by painting and trim work, Waller said.

“We hope Amber and her kids can move in over the holidays,” Rodgers said. The future homeowner, selected through the Habitat family selection process and approved by the Habitat board, is Amber Mounce, her daughter Aniyah, 11, and son Kaylen, 8.

As work progressed on the first hero house, the Heroes of Habitat committee accepted nominations for the second hero.

The 2020 hero, selected by the committee from among several nominees, is Sgt. Anthony Maddox, Waller said. Maddox, a Normal native, died in an accidental explosion in July 2013 while serving in the U.S. Army in Afghanistan.

The Maddox family will join in construction of the house next year, as the Rodgers family did with the house this year, Waller said.

“We are humbled and honored to have this bestowed on our son, Anthony Maddox,” his father, Jerome Maddox of Bloomington, told The Pantagraph.

“It’s not easy,” Maddox said of the death of his son. “We deal with it on a daily basis. Friends and the community help you to go forward.”