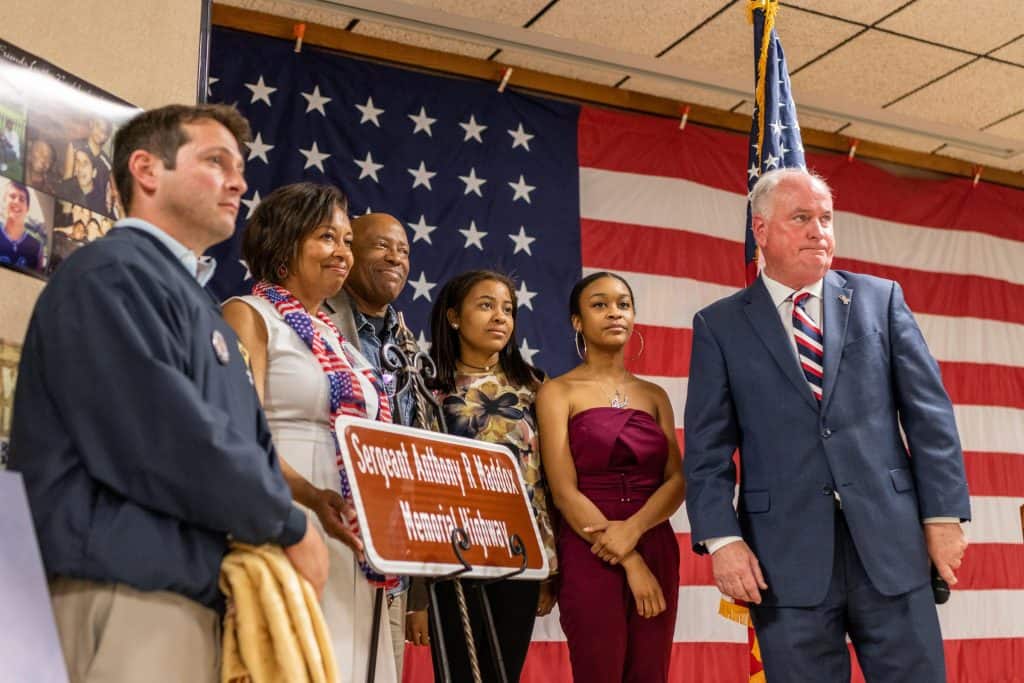 Reprinted with permission of WGLT

A huge crowd marked Armed Forces Day on Saturday by honoring the life and death of Sgt. Anthony R. Maddox, a former Bloomington-Normal resident who died six years ago from injuries suffered while serving in Afghanistan.

Saturday’s tribute began with a lengthy processional past a stretch of Interstate 55 between Normal and Towanda that has been renamed “Sgt. Anthony R. Maddox Memorial Highway.” When the long line of jeeps and motorcycles returned to Bloomington’s VFW 454 Post, Maddox’s family and friends shared memories of the 22-year-old known as “Mad Dawg.” See additional photos and videos from processional as well as video from dedication.

That stretch of I-55 passes Normal Community High School, where Maddox attended before transferring to another school in Texas.

“It fills our hearts to know that this is done and will be an everlasting testimony,” said his mother, Frances.

One by one, family and friends shared their own favorite memories of Maddox. He was born in New Orleans and his family moved to Bloomington 2001. He played football with the Bloomington Cardinals and at NCHS. Since his death, his sisters have adopted his Mad Dawg nickname when they play sports.

His family said the Army was a great fit for him. He was a petroleum supply specialist and heavy-vehicle expert, and he was taking steps to become a Ranger. The weightlifter with what friends say was a “cool swagger” quickly became his platoon sergeant’s go-to guy for difficult missions.

He suffered fatal injuries in a petroleum accident with an Afghan truck in July 2013.

Saturday’s well-attended ceremony also featured comments from state Rep. Dan Brady and Sen. Jason Barickman, who helped arrange for the highway dedication. The room was adorned with photos of Maddox’s life, from his childhood through his time in the Army.

“Please continue to remember Anthony anytime you drive on I-55,” said his father Jerome. “You will see that sign and keep his memory alive.”