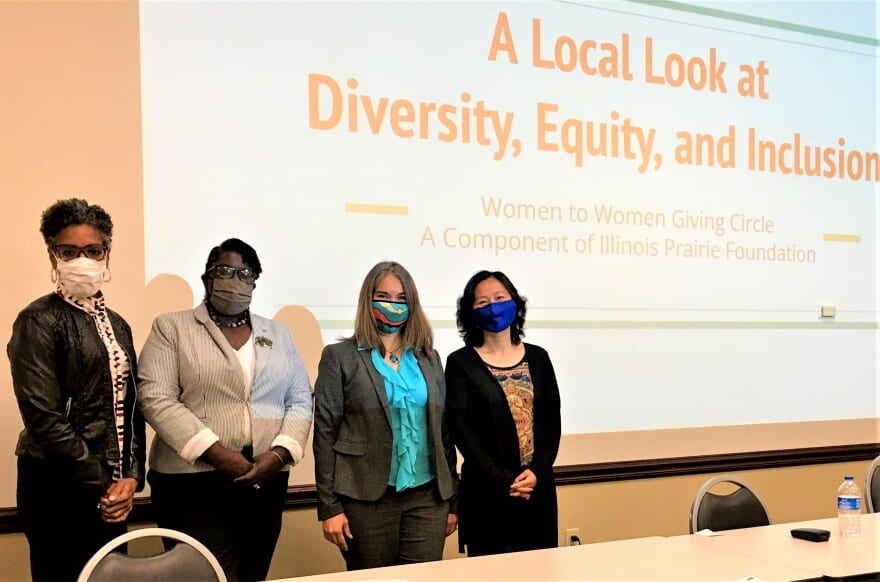 A panel of three women who have successfully worked to improve diversity, equity and inclusion in their workplaces say efforts must be intentional and strategies need to address both individual and structural changes that can be sustained.

The comments came during a panel discussion, “A Local Look at Diversity, Equity and Inclusion (DEI),” hosted by the Illinois Prairie Community Foundation’s Women to Women Giving Circle on Tuesday evening at the Illinois State University Alumni Center.

Country Financial Diversity and Inclusion Program Manager Angela Allen stressed there’s a strong business case to be made for improving DEI because it attracts new talent with different experiences to help create products and services that meet the needs of consumers and the community.

She advises organizations to prioritize sustainable changes as part of a strategic plan.

“Because it is challenging, because there’s not enough time, and because there are not enough resources – we can come up with all the excuses – but there’s a way to say, ‘Let’s narrow this down, what can we do today, what can we do the next year, or three years, five years?’ and go about it in a way that’s strategic, that we can pull people and resources in a way that makes sense.”

“There’s work that can be done with DEI in whatever space you have. Whether you’re the top leader or middle management or even a worker, there are things you can implement where you work or your organization that can really influence folks.”

Rocio Rivadeneyra, associate dean of the College of Arts and Sciences at ISU

“Integrating into the work people do every day also helps it become more doable … more feasible. I think those are some of the messages and the ways I’ve seen it (DEI work) resonate with people.”

Finding influential champions also helps. Allen points out the CEO at Country signed a DEI pledge that includes continually sharing and implementing best practices and pledging to engage in continuous learning. That approach, she said, allows her organization “to continue building our DEI muscle.”

Zi Leng, associate professor at Wonsook Kim College of Fine Arts and president of Asia Connect at ISU, came to the U.S. in 2002. She explained it was challenging to feel a sense of belonging and found important relationships and a sense of self through AsiaConnect. Leng also quickly learned the importance of helping other, newly-arriving immigrants from all over the globe.

Leng said it is important to focus not only on changing individuals and the culture of an organization, but the most effective approach involves looking at the structural system – policies, procedures, recruitment, promotions, hiring – and determine whether it eliminates barriers.

“The goal is to really change the system and the structure, and we want to use all our energies to make that happen,” Leng said.

Leng said that’s not always easy when many individuals are in denial there is a problem. In the Fine Arts college, she began trying to advance DEI efforts by initiating an extensive student survey that helped faculty and staff understand how students perceive the climate, the curriculum, opportunities, and even theatrical productions as a reflection of the diverse student population. She said the results were, in her words, “shocking” to some in her department.

In realizing change doesn’t happen overnight, Leng has tried not to ask too much of busy faculty. For example, she initiated a forum in which she poses a question of the week and posts a related article. It helps her colleagues begin to think about diversity (ask who is in the room?), equity (ask who is trying to get in the room but can’t?) and inclusion (ask have everyone’s ideas been heard?).

All three women at Tuesday’s event said achieving small wins like that can build momentum.

Leading where you are

Rocio Rivadeneyra, associate dean of the College of Arts and Sciences at ISU, is also a member of OLE, an affinity group on campus for Latino/an Hispanic employees.

According to Rivadeneyra, revamping the Honors program at ISU is a good example of how effective DEI strategy includes taking a look at how policies and procedures can make a difference. She began by acknowledging to her small staff that she wanted to make significant changes in one of the least historically-diverse programs on college campuses across the country.

Rivadeneyra and her colleagues changed admissions standards, from heavily weighting test scores to putting more emphasis on essays and personal experiences. A team examined and made changes to the curriculum to make it more diverse, adding new authors and topics. Cultural competencies were included as a key outcome. The result: The university was able to attract and keep more diverse students in the Honors program.

The argument for focusing on diversity, equity and inclusion for any organization is “to avoid wasting human potential.”

Rivadeneyra strongly encourages anyone to just start leading change where they can.

“There’s work that can be done with DEI in whatever space you have. Whether you’re the top leader or middle management or even a worker, there are things you can implement where you work or your organization that can really influence folks,” she said.

Changing a climate that is often fueled by fear and self-interest isn’t easy. But Tuesday’s panelists advised, especially when it comes to conversations with individuals reluctant to admit there’s a problem, make sure to stay focused on your goals.

Allen said sometimes it’s more effective to use an ally. She said as a Black woman, a naysayer is going to see only self-interest in a claim of systematic racism, whereas an ally might be able to get through with an anecdote or data that appeals to the head or heart.

“Finding someone they have a mutual identity with, and then have them tell that story; meeting people where they are, and then that can create the space for them to start to see differently. Again, it’s about small nudges as opposed to pushing someone over the edge and then you may lose them. They become defensive and then you end up fighting instead of having a conversation around it.”

She added, “Not everyone is going to get on board with it. That is the reality. Not everyone will agree. It’s not always about the agreement, it’s about, ‘Can we make progress in a way that’s meaningful?’”

Rivadeneyra agreed different strategies will work with different people, but there are some who just won’t budge. Her advice: Don’t expend too much energy on them because there are bigger wins elsewhere.

“There are just some folks that no matter what you say you’re not going to convince them so you need to spend energy on people where you see some promise, you see some glimmers of change, of connection, of nudging them along,” she said.