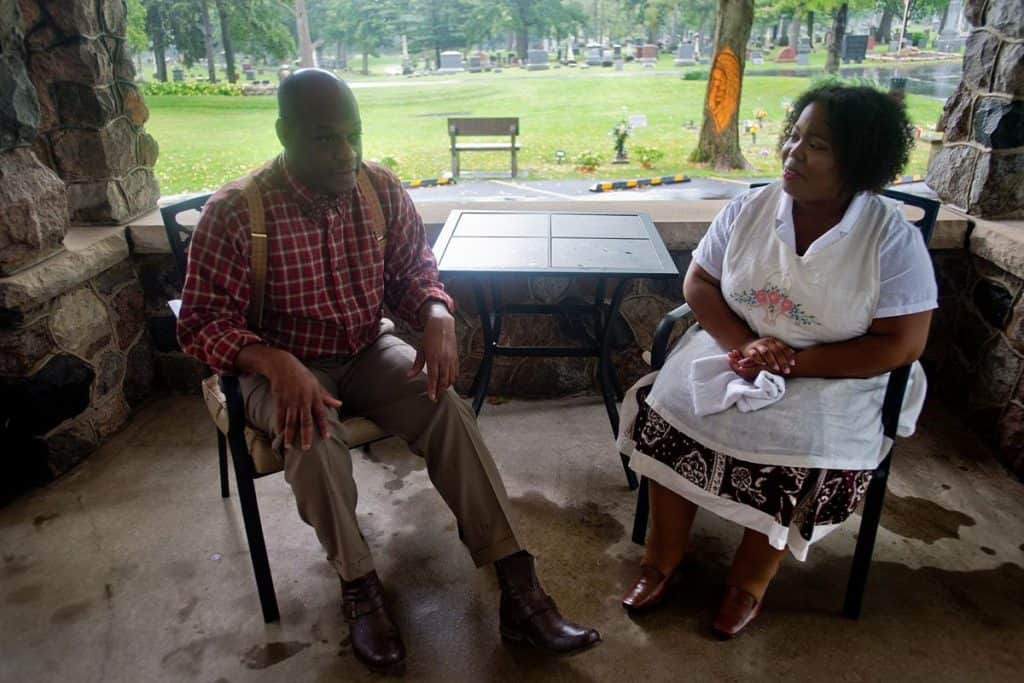 BLOOMINGTON — When the Evergreen Cemetery Walk was started 25 years ago cemetery vandalism was a major problem, especially in Bloomington’s oldest cemetery.

“The issue of vandalism in cemeteries has not gone away,” said Candace Summers, director of education for the McLean County Museum of History. “But since the inception of this event in 1995, instances of vandalism decreased dramatically at Evergreen Memorial Cemetery.

“It’s a very important teaching tool that we use to keep fresh in people’s minds that they need to preserve and honor cemeteries and those who are interred in them,” added Summers.

A couple of headstones were damaged with spray paint at Evergreen in September 2017, and in April 2015 eight markers were vandalized when some were pushed over and others chipped.

But there has been no vandalism at Evergreen since the 2017 spray-painting incident, said Terry Hansen, the cemetery’s manager.

The walk brings the voices of McLean County’s history to life with costumed actors portraying various people, both well-known and not-so-well-known, who are buried in the cemetery established in the 1800s.

“This event in its 25 years has shared the stories of 183 different people who came from all walks of life and who all have something to share,” said Summers.

The educational event is a partnership between Evergreen Memorial Cemetery, the McLean County Museum of History and Illinois Voices Theatre Echoes.

“The teamwork in educating not only the community here, but communities around here that come out for the cemetery walks …  helps people respect the cemetery more and understand the histories of the cemetery, the people in the cemetery, Bloomington-Normal and the surrounding areas,” said Hansen.

The event serves about 3,500 people, mostly students, every year.

Evergreen is a “repository of our county and a part of our state’s history and nation’s history and very much could be looked at as a museum,” she added.

Patrons of this year’s walk can look forward to hearing stories about Napoleon and Louise Calimese, who were superintendent and matron, respectively, of the McLean County Home for Colored Children, who spent nearly 30 years investing in the lives of their charges; Florence Kaywood, who spent 16 years caring for female prisoners and their children while serving as the police matron for the city of Bloomington; and Oliver Munsell, who helped revive a shuttered Illinois Wesleyan University in his time as president, though his tenure was tarnished by scandal.

Also featured are: Charles Kirkpatrick, a longtime Bloomington businessman, civic leader and organizer; Annie May Christian, an independent, single woman who was a capable, intelligent, and enthusiastic leader of the local Amateur Musical Club; and Ebenezer Wright, head of the western agency for the New York Juvenile Asylum, an institution that sent children west on the Orphan Train.

Tickets are available for public performances at 11 a.m. 2 p.m.  each Saturday and Sunday, Oct. 5-6 and Oct. 12-13. Tickets are $17 for adults, $15 for museum members and $5 for children and students. Adults can receive a $2 discount if tickets are purchased 24 hours in advance.

Tickets can be purchased at the museum, Evergreen Memorial Cemetery and online through the museum’s website” https://www.mchistory.org.