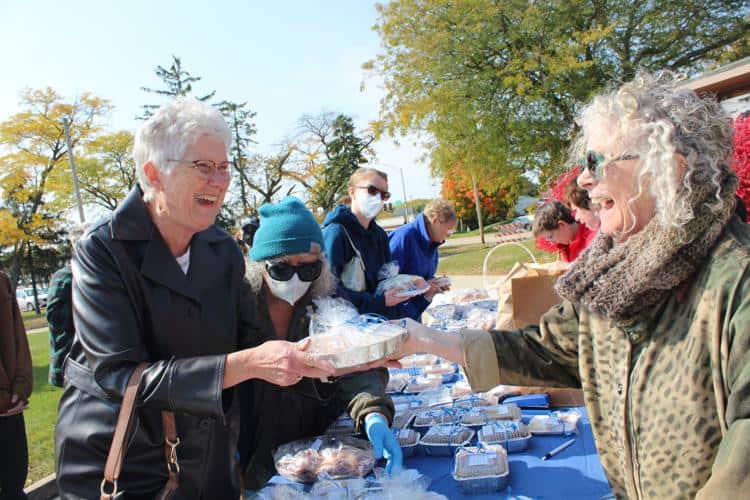 At least 70 attended the first Festival of Jewish Life on Sunday at the Moses Montefiore Temple in Bloomington, celebrating the greater community and all things Judaism, as well as the synagogue’s 140th anniversary.

Meryl Brown, Moses Montefiore Temple president, said in advance of the celebration: “We’re hoping it goes off with a bang.”

She also said her temple loves community, and that love extends to the whole community — not just their own.

“We want all of Bloomington-Normal, that not only knows us, but also knows, likes and trust us,” Brown said, adding that all were invited to come and have fun with them.

Brown said the celebration lined up perfectly with Simchat Torah, a holiday where they celebrate going back to the beginning of the Torah.

And it’s a big deal, she noted. Every week, Brown said they read a portion of the Torah in order.

“We read throughout the entire five books of Moses, and then we start over again,” she said.

Rabbi Rebecca Dubowe told The Pantagraph that celebrating their life and culture is about responding to challenges, such as the rise of anti-Semitism, by stepping forward “together in solidarity with our community.”

She also said they should show their children — who often are the only Jewish ones in their schools — that many people care about them, and they care about other kids, too.

When asked what celebrating Jewish life means to him, temple member Herm Brandau, 81, of Bloomington, said it’s about celebrating life. He noted Jewish people have a long history with tragedy, but concentrating on the good in human nature is important.

“Psychologists will tell you, unfortunately, that it’s easier to stir up negative feelings than positive feelings,” Brandau said. “It’s more of an effort — and an effort worth doing — to really stir up people’s positive beliefs for other people, and even themselves.”

Dayna Brown was another synagogue member present. She said it’s important to celebrate their community, because they’re a small but a very strong one.

“A lot of us grew up in other areas where there were more Jewish celebrations,” said Brown. “It’s really exciting for us to be able to share some of our traditions with our neighbors and friends.”

Food was also served during the event, including falafel from The Rock, fresh grilled hot dogs, and Jewish bakery items. There was a kosher wine tasting by the Mystic Kitchen, too.

Temple member Beth Sender, 66, of Normal, helped run the bakery table. She pointed to how their synagogue has active and energetic members of all ages and persuasions, and that makes her happy to see.

Sender listed food items tabled, such as their challah bread, which is eaten Friday nights on Shabbat. They were made by Marty Toher, who she said is a wonderful baker.

They also had Rugelach, which Sender said is cinnamon and nuts rolled in sugar with a buttered crust. And it’s delicious.

She agreed sharing culture means sharing their cuisine, too, while adding that means inviting out the community.

“We want the community to know more about us and that we value our friendships and relationships with other members,” said Sender.

The Children’s Corner opened up just after noon for music and songs, story time, and activities for the kiddos. A puppet show was also put on.

Temple principal Myriah Monical read one children’s book detailing Jewish holidays, like Rosh Hashanah and Yom Kippur, plus naming ceremonies. One page read: “Here is a yarmulke, here is a shawl. Here is the synagogue, open to all.”

Another stated: “Here are two candles, with flames burning bright. Here is the challah we eat Friday night.”

She then read another text titled “Are We Still Friends,” which encouraged kids to celebrate their differences and appreciate their similarities.

Synagogue member Megan Goldfarb went to the festival with her son Noah Goldfarb, 3, and daughter Emma Goldfarb, 6. She said celebrating their culture is about family, perseverance and community.

Emma Goldfarb shared with Monical that her Hebrew name is Shaindel. Her mother said it means “beautiful.”

Phani Aytam, of Bloomington, attended with his daughter, Shree Aytam, and wife, Sandeepa Aytam. He said he worked with Rabbi Dubowe on the Not In Our Town project, and added the event was “everything our community is about.”

He said that includes diversity, and celebrating our differences.

Aytam also said he came because he just wanted “to be there for all of our neighbors.”

Illinois Prairie Community Foundation awarded Moses Montefiore Temple a Sol Shulman Jewish Education and Life Grant to fund the Jewish Festival of Life. If you would like to support programs like this, donate online.

Top Photo Caption: Carol Bengston, 73, of Bloomington, is handed an apple cake by Debi Woodring Grossman while attending the first Festival of Jewish Life on Sunday at the Moses Montefiore Temple in Bloomington.