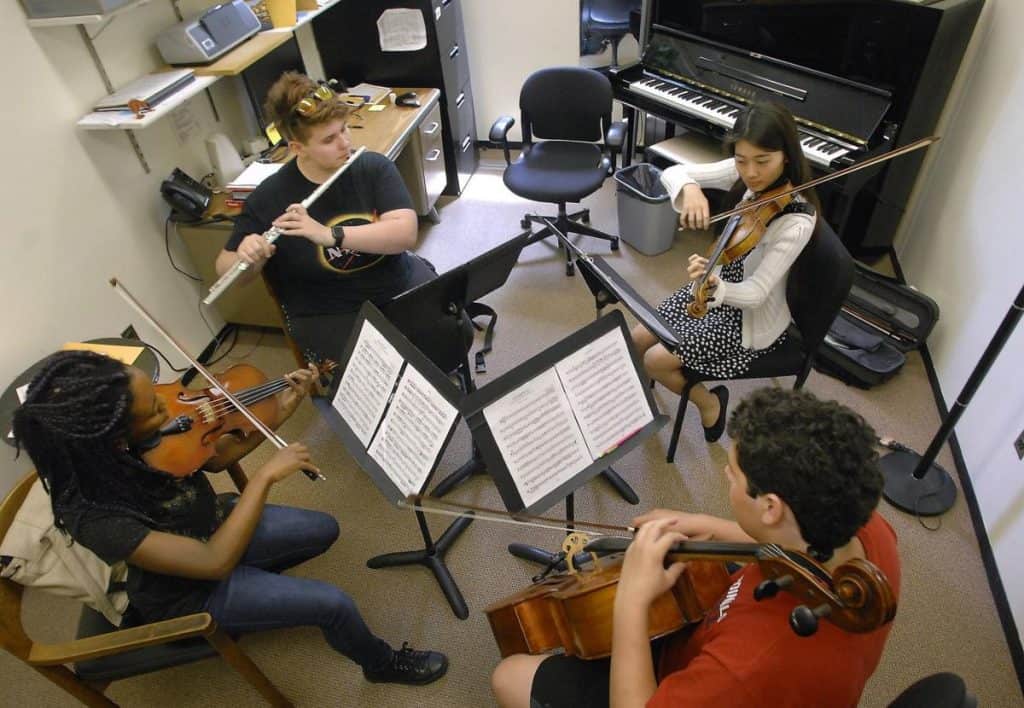 It was Tuesday, only the second day of camp, but already the quartets and trios were coming together.

Unlike orchestral music, there is no conductor in chamber music. The musicians take their cues from each other.

That’s part of what makes chamber music a favorite of Lisa Nelson, a visiting professor of music at IWU and executive director of the Illinois Chamber Music Festival.

“Everyone is an equal partner in how things will be shaped,” she said. “They learn how to lead, to follow and to communicate without words.” 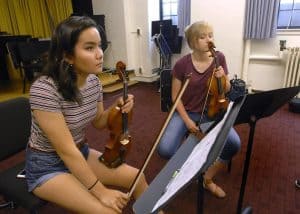 Violinist Rene Mohammadi, left, and Esther Lehman, both of Bloomington, worked out their parts for the Dvorak Quartetto during the Illinois Chamber Music Festival camp at Illinois Wesleyan University.

As Nina Gordon, associate professor of cello and chamber music at IWU worked with a group of string musicians, she reminded them, “Don’t forget to look at each other.”

Students were given their individual parts before camp began, then went to work putting everything together.

“There’s a lot of eye contact,” said a student in another group, Esther Lehman of Bloomington.

But that’s not all.

“A lot of it is knowing each other,” said another student, Jeannette Memmer of Bloomington. “If you can’t anticipate what they do, you can’t be in a quartet.”

The students will be performing together in public concerts, with a final combined faculty and student concert at 3 p.m. July 28. Faculty concerts also will take place throughout the festival that runs through the end of July. A complete schedule is available at www.ilchambermusicfestival.com.

A special Children’s Concert allows parents to bring their children without worrying about them making some noise. In fact, “we give them things to do,” said Nelson, and “they get introduced to different music and different instruments.”

Nelson said with chamber music “you learn from each other. You feed off the energy.”

Forty young people from across the country are attending this year’s camp, many are from the Bloomington-Normal area and Midwest, but one is from Saipan, the largest of the Northern Mariana Islands, a U.S. Commonwealth in the Pacific.

Kate Ishida said there is only one college in her home of Saipan and no music camps like this.

“I wanted to try something different, not just solo,” said Ishida, who plays violin.

Joseph Shim of Normal is attending the chamber camp for the second year, but is in his fifth year playing the cello.

The former Chiddix Junior High School student, who will attend University High School this fall, said, “the people here are great. They’re like me.”

The love of music — and talent of the students — was readily apparent as they worked on their music.

Alexa Letourneau of Pickerington, Ohio, who will be a junior at IWU this fall, was happy to be invited as a counselor.

“It’s a great opportunity to work with young musicians and have some fun myself,” she said.

Andrew Young, a cellist from St. Louis, is attending camp for the fourth time and will be a high school sophomore this fall.

“I like the community and the level of teaching here,” he said.

This is the 16th year for the festival. It receives support from the Illinois Arts Council, Laura Sullivan Arts and Culture Endowment Fund at Illinois Prairie Community Foundation, and a Town of Normal Harmon Arts Grant.

“We try to make it possible for everyone who wants to come to attend,” said Nelson.

Many of the students come back year after year. “They make good friends,” she said.