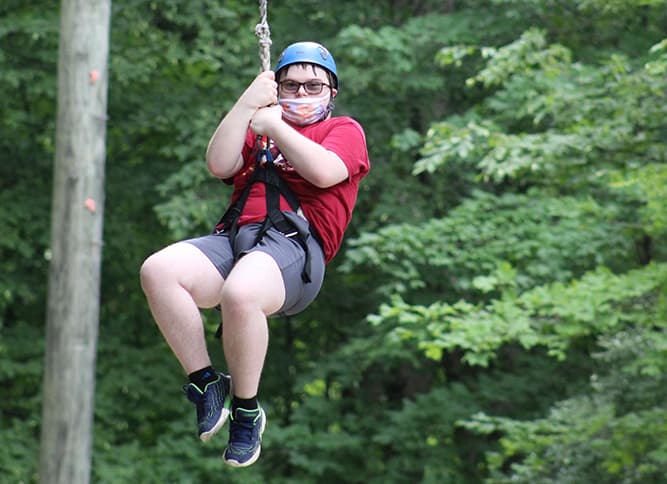 Recently a group of teens attending a weeklong Respite Camp went outside their comfort zones and conquered many challenges at Easterseals’ Timber Pointe Outdoor Center on Lake Bloomington, near Hudson.

The entire camp stay challenges campers to participate fully in many new experiences. Key among the new experiences is Timber Pointe’s Challenge Course. Designed for all ability levels and consisting of elements such as high ropes, zip lines and a giant swing, the Challenge Course was recently upgraded to include a slanted climbing wall participants can ascend to reach the zip-line platform.

Camp staff and course facilitators must complete special safety training as well as learning each camper’s limitations and helping them push through uncomfortable situations. Creating an environment where each camper can achieve a sense of accomplishment is the goal of the camp and the Challenge Course, said Amber Gruenloh, Easterseals Community Vice President in Bloomington-Normal.

During this particular week of camp in late June, a group of 8-10 campers visited the Challenge Course on Monday morning. Some waited patiently for their turns while listening to music as others were fitted with safety harnesses and helmets before tackling the course.

A sense of nervous energy could be felt among those waiting their turns. One camper confided that he was both “excited and terrified” at the prospect of zipping down the line. “Excited” won out over “terrified” when he asked a facilitator to fit him with a helmet and harness.

Campers Brendan and Sarah easily climbed the rock wall and eagerly awaited their turns to ride the zip line down. Brendan went first and sailed down with a huge smile on his face while his fellow campers and the Timber Pointe staff cheered him on. Next came Sarah who zipped down as if she had done it every day of her life. A staffer confided that Sarah had never climbed a rock wall nor had zip-lined before that day.

Next up was Zoe, who opted to ride the chair harness up to the platform instead of climbing the wall. Once to the top, she initially asked to come back down, but was encouraged to continue on by a facilitator. Ultimately, she sailed down the line with a whoop of excitement and a shouted “Hi, Father!” to her dad who would ultimately see the video recording of her descent.

Gruenloh said that surveys completed by campers consistently report the Challenge Course is the highlight of camp experiences. “We get so many responses that say ‘Zip lining was my favorite part of camp,’ so we knew this is an area we needed to update.”

Allen McBride, Timber Pointe Director, said that the chair harness and climbing wall were recently added to the course to make it easier for all campers to access the course. Previously campers had to climb a pole to access the platform and not all participants have the strength and coordination to do so.

In addition to upgrading the Challenge Course, the ongoing Centennial (capital) Campaign will upgrade campers’ bunk cabins and is looking to pave pathways around the center making all parts of the outdoor center accessible for campers of all abilities, said Gruenloh.

Illinois Prairie Community Foundation awarded a 2021 General Grant to Easterseals Central Illinois to replace worn ropes, and purchase additional harnesses for instructors and participants, as well as more helmets to ensure the highest safety standards for both participants and instructors.

If you would like to help fund more programs like this in the community, donate online to IPCF’s Annual Campaign which helps fund the General Grants.