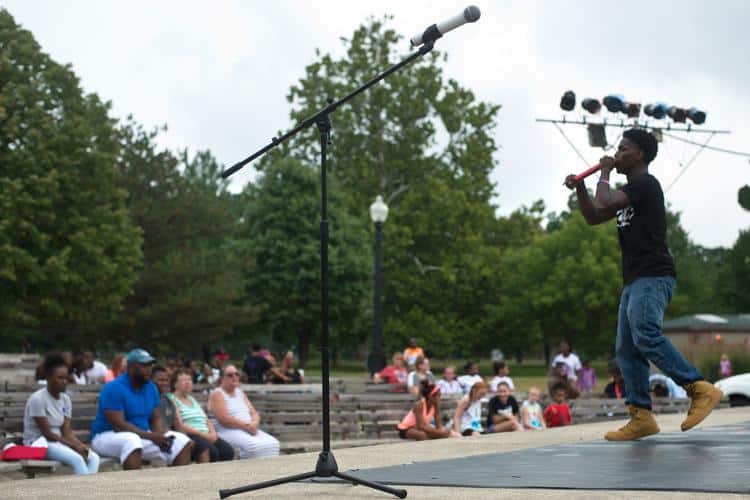 BLOOMINGTON — As a 17-year-old senior at Normal Community High School, Tristan Bixby wants to make a difference. In March, she helped lead NCHS students in the national walkout to protest gun violence. On Saturday (August 19, 2018), she joined about 70 other people at the Miller Park Pavilion for “Community Kickoff: Building Opportunity for our Community’s Young People,” an open public assembly. 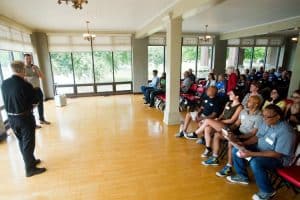 United Way of McLean County President and CEO David Taylor, facing left, and Not In Our Town chair Mike Matejka address a crowd of 70 before splitting them up into groups during “Community Kickoff: Building Opportunity for our Community’s Young People,” an open public assembly as part of the 39th annual Cultural Festival at Miller Park in Bloomington.

“That school walkout really started it for me because my family has had issues with gun violence and I spoke out then,” she said. “Since then, opportunities to make a change have occurred more frequently, and this event is something that we can take and find ways to bring the community together as a whole. Something like reducing gun violence and violence in general, takes time, effort and work.”

Not in Our Town, an anti-racism organization, and United Way of McLean County hosted the event with support from the city of Bloomington, town of Normal and Advocate Health Care. The 70 people were separated into groups of 10, and facilitators directed the groups on conversations ranging from concerts they have enjoyed to describing the Twin Cities in five words.

“What we want to do is just have some open discussion then take that information and try and learn from it and improve our community,” said Mike Matejka, chair of NIOT. “It’s not so much about this group meeting again, but if we were to learn something about employment concerns or something along those lines, we might find the appropriate organization to address those concerns, such as BN Advantage.” 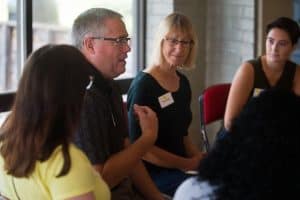 Bixby was one of several youth who attended. Classmate Ajitesh Muppuru said the interaction between youth and community leaders was a step in the right direction.

Alexander Phillips, 16, a junior at Bloomington High School, said the forum was a great way to get concerns of the local youth to community leaders.

“I think it’s important for them to hear not only from the youth, but also from younger minorities who feel like they may not have a voice,” he said. 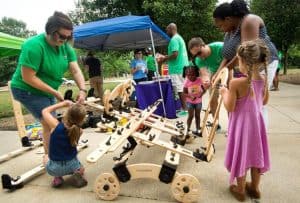 Children and adults work together to create a moonbuggy in the kids zone as part of the 39th annual Cultural Festival at Miller Park in Bloomington.

“This is a first step for us,” Taylor said, “because the people in this room are going to help us define what some of those next steps look like. We won’t walk out of here with all of the answers. We realize there is a lot more complexity and a lot more to these issues that are affecting young people today but we want to define and identify what those are and then take steps toward improving on those things.”

The event finished prior to the conclusion of the 39th annual Cultural Festival, also held at Miller Park on Saturday. The free festival celebrated cultural diversity and heritage and included performances on the main stage, vendor booths and a newly expanded Kids Zone.

Cultural Festival received a $2,000 grant from the Mirza/Arts & Culture Grants at IPCF. If you would like to support programs like this, please donate to the IPCF Arts and Culture Endowment Fund.