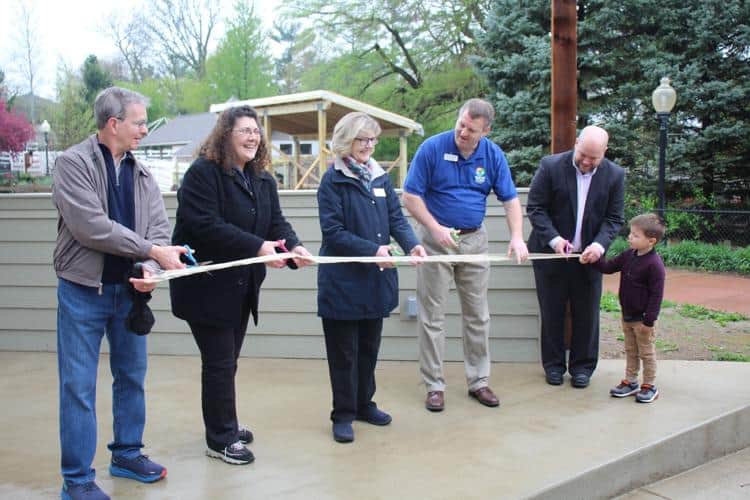 Story and Photos by Brendan Denison

BLOOMINGTON — A new educational theater at Miller Park Zoo in Bloomington was dedicated May 6, 2022, in memory of Sullivan Rohrscheib.

Zoo Superintendent Jay Tetzloff said at a ribbon-cutting ceremony that the theater will aid them in meeting their rebranded mission of engaging the community in conservation, education and fun.

“This project has the ability to hit all three,” he said of the zoo’s directives.

The superintendent noted the project faced challenges from logistics during COVID and how “every kind of utility ran through the site.”

Tetzloff said building the theater allows them to move forward with an additional project that adds new South American animal exhibits, or enhances their current ones. That includes bringing in giant anteaters, bush dogs and Chilean pudus, plus giving a new home to their existing Galapagos tortoises.

The Rohrscheib Theater replaces the Rainforest Theater, Tetzloff said, and the latter will be demolished once work begins on the South American exhibits.

A large video screen will be later installed in the new theater, as well as a sound system, he said. Additionally, there’s still some exterior landscaping work left to be done.

“We’ve already had a few calls about having a wedding here,” Tetzloff said, noting they didn’t envision that kind of use from the start.

Carroll said the society believes the zoo “is an incredible community asset” that provides education and entertainment, while also supporting conservation efforts for endangered species.

“Our role in conservation is much bigger than you would think in this community,” Carroll said, adding they’re thankful for support from their donors.

Tetzloff said the final cost of the theater was slightly over $100,000, and it was funded entirely through private donations.

A press release from the City of Bloomington stated Josh and Ciarra Rohrscheib put forth a significant amount of funds for the theater.

Josh Rohrscheib, of Normal, told The Pantagraph that his son Sullivan died as a newborn. Ciarra Rohrscheib added she brings her family to the zoo all the time, and visited while she was pregnant with Sullivan.

She said Miller Park Zoo is a great place for kids, and the new theater will bring joy to children in the community.

Tetzloff said projects like this don’t happen without strong support from the community. Additionally, he said their junior zookeepers will use the theater for several talks each day, and education videos will be presented there, too.

The zoo is planning several upcoming events, such as the Zoological Society’s Brews at the Zoo fundraiser June 10-11. Others include “Pollinators Rock” from 10 a.m. to 3 p.m. on Saturday, May 7, teaching about conserving local pollinators and endangered plant species; and Endangered Species Day on Saturday, May 21.

Other zoo projects are a new birthday gazebo, and a mulefoot hog exhibit that Tetzloff said will probably open by July.

Outdoor birds cared for at the zoo continue to be sheltered indoors during the avian influenza outbreak. Tetzloff said they hope to have those birds back outside by early July.

The zoo announced on social media last week that Callimico monkeys are now on display in the Tropical Rainforest, for which populations are listed as vulnerable.

Tetzloff said the DeBrazza’s monkeys have unique personalities: One is more personable, and the other is more standoffish.

Staffers continue to build trust with them, he continued, and that takes time.

The superintendent said the monkeys are part of breeding programs to help sustain their populations, and the exhibits diversify the educational experience for guests.

He also hopes their conservation efforts will make an impact lasting for several generations.

Tetzloff said he wants to be “able to show my great-grandkids what a DeBrazza’s monkey and what a red-flanked duiker looks like 50 years — 100 years from now.”

Illinois Prairie Community Foundation serves as fiscal sponsor for the Sullivan Rohrscheib Memorial Fund. If you would like to support the fund’s mission of funding projects in our community that bring joy to children, donate online.

Top Photo Caption: Josh Rohrscheib, right, helps cut the ribbon on the Rohrscheib Theater at Miller Park Zoo in Bloomington. The Theater, which replaces the Rainforest Theater, was dedicated in memory of his son, Sullivan, who died shortly after birth.