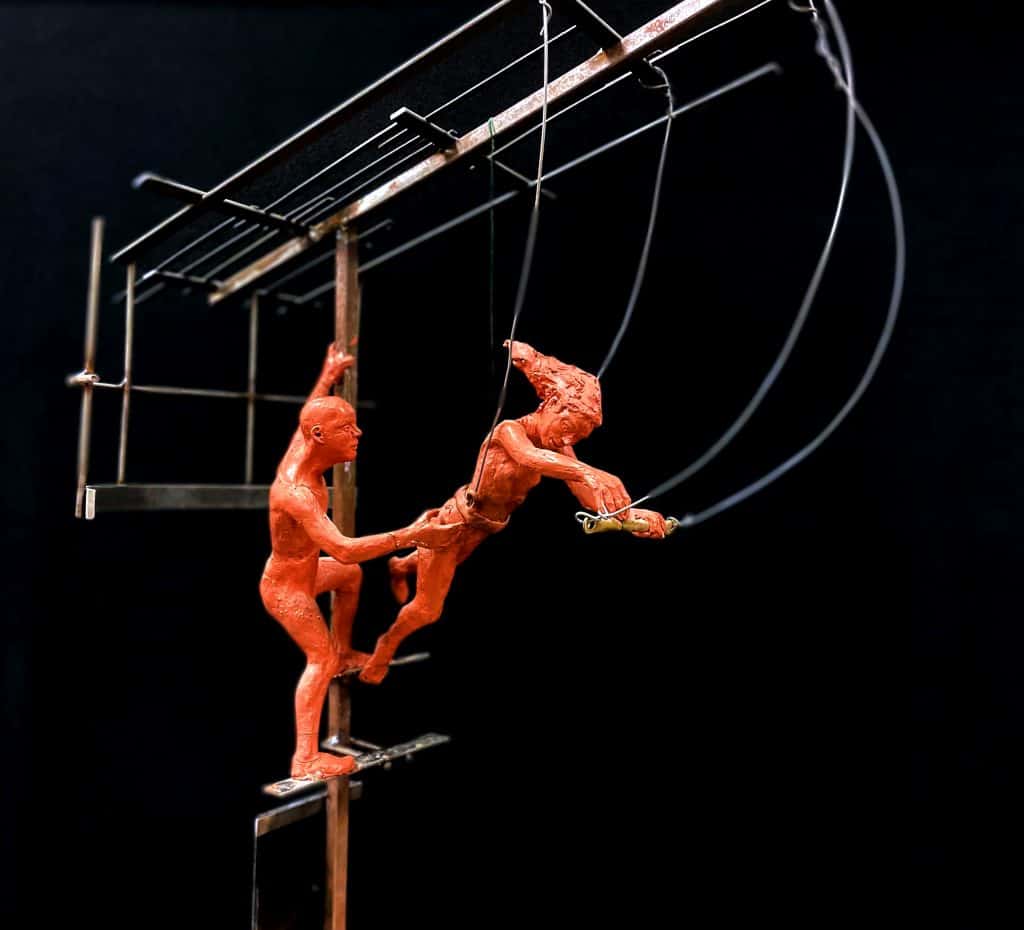 Bloomington Stars Take Flight is a sculpture by Andrew Jumonville that will be placed at the southeast corner of East and Washington Streets in downtown Bloomington, the site where the YMCA used to stand, and across the street from the earliest dedicated gymnasium in town. The artistic work draws attention to the tremendous impact this community once had on the development of the American Circus.

In the era before movies, television and the internet, it was the circus that entertained the masses. Traveling circuses brought exposure to different cultures and countries, as well as acrobatic and aerial feats to communities big and small across America and around the world. Arguably, the biggest stars under the big top were those brave men and women who risked their lives to entertain massive crowds by performing tricks high above their heads – the aerialists known as trapeze flyers. A vast amount of those performers came from Bloomington, Illinois.

While Frenchman Jules Leotard first used the trapeze as a performance apparatus in Paris’ Cirque Napoleon (now known as Cirque d’Hiver) in 1868, by the early 1870s Jesse Fell’s nephew, I.P. Fell, installed a trapeze for men to use in his Bloomington gymnasium. Two members of his gym were young teenaged boys named Green. After an exhibition of talent, the local newspaper published an article suggesting that the Green brothers were every bit as good as professional athletes performing in wildly popular circuses of the day. That’s all the brothers needed to hear: they soon joined a circus. After gaining experience and growing their talents, they came back to Bloomington for the winter months, when circuses didn’t travel.

The Green brothers kept at it, year after year, known professionally as The Flying LaVans. As their fame grew, more Bloomington-based acts followed: The Fishers, The Aerial Smiths, and The Flying Wards, to name a few. Eddie and Jennie Ward built a barn at 1201 E. Emerson Street for the specific purpose of training aerialists for circuses. Hundreds learned how to fly right here in Bloomington!

By the time the YMCA was built at this site, those most elite stars of the circus – the aerialists – were calling Bloomington home. Perhaps this fact inspired the Y to have permanent trapeze rigging installed. Under the tutelage of the YMCA’s C.D. Curtis and Chuck Halloway, dozens of youths took their first leap off a pedestal board on their way to stardom.

More than one hundred acts used this community as their base of operations, yet there’s nothing celebrating and educating the public about the role this community played in entertainment history. This piece of sculpture, Bloomington Stars Take Flight, will change that.

Illinois Prairie Community Foundation serves as fiscal sponsor for the Bloomington Stars Take Flight Fund. If you would like to support this effort to fund the sculpture in downtown Bloomington celebrating the community's role in circus history, please donate online by clicking on the Donate button below. If you prefer to make a donation in another manner, click here for information.