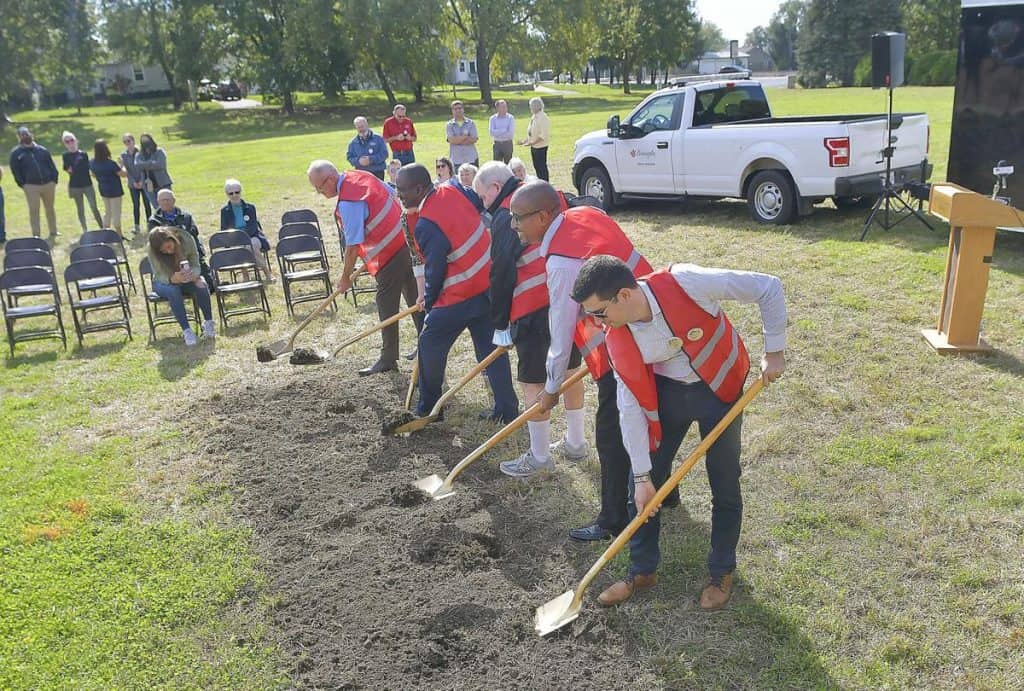 BLOOMINGTON — An anonymous donor has created a $20,000 endowment fund to help families in west Bloomington take advantage of the planned $11.7 million O’Neil Pool and Park investments.

Mayor Mboka Mwilambwe announced the newly created fund Wednesday afternoon (October 20, 2021) during a ground-breaking ceremony for the project, which is set to go out to bid next month.

“While an argument can be made that this park will stimulate the west Bloomington economy, what excites me the most is the investment we are making in the lives of the people on the west side, and also in the community,” Mwilambwe said during the ceremony.

He added that, once the project is completed, it will provide “safe recreational options for all residents to enjoy,” including programming to teach future life guards and swim lessons.

The endowment fund was created through the Illinois Prairie Community Foundation. The Boys and Girls Club of Bloomington-Normal will help identify the families who could receive assistance paid for by the endowment, such as pool passes.

Around 20 current and former city leaders, staff and community members attended the ground-breaking ceremony, which featured a brief overview of the project.

Current designs for the pool include a lazy river, water play features, a bath house, water slides and a separate lane pool. Other park amenities planned under the overarching renovation project are an updated skate park with a bowl structure, along with tennis courts and walking paths.

Interim Parks, Recreation and Cultural Arts Director Eric Veal said in an interview with The Pantagraph that the city hopes to open a portion of the pool in 2022, but they won’t know for certain until the bidding documents are completed later this year.

Bloomington demolished the 45-year-old aluminum pool in O’Neil Park last fall, after the pool sat unused amid the coronavirus pandemic. The aging pool, which had long outlived its 25-year lifespan, had been a topic of concern as city staff routinely patched and repaired it.

In October 2020, the city entered a $775,000 contract with Williams Architects of Itasca to design a new aquatic center and other recreational amenities for O’Neil Park.

Mwilambwe reiterated that the pool and park renovations, plus the $20,000 endowment fund, will ensure that all community members are able to take advantage of the parks and recreational programming and amenities.

The pool, he said, will no longer be a topic of “doom and gloom.”

“Today is a new day where we begin to talk about the possibilities about this facility rather than its shortcomings,” Mwilambwe said. “We did not get here by mistake. It took vision, creativity, collaboration and determination.”

If you would like to make an online donation to the O’Neil Park Pool Pass Endowment, please click here. If you prefer to make a donation in another manner, click here for information.