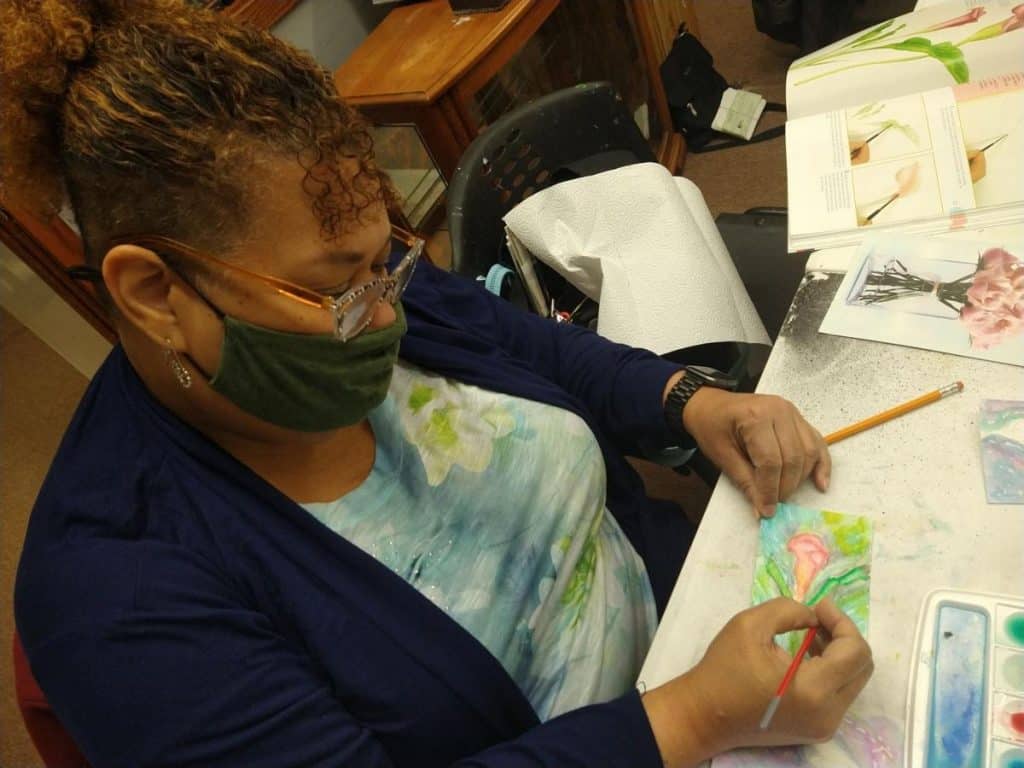 Story and Photos By Brendan Denison

BLOOMINGTON — Learning to paint with watercolor involves trial and error, said instructor Laura Bailey with the Inside Out: Accessible Art Cooperative in Bloomington.

She taught the craft to just over half dozen people who made watercolor cards as part of a Sunday afternoon class at the nonprofit Bloomington art gallery.

Students were provided Arches-brand 150lb cold pressed paper, which the instructor said doesn’t soak up as much paint as thicker sheets would. Although some like to begin painting dry-on-dry, Bailey said she’s not a fan of that.

“I always start out with wet paper,” she said. “Sometimes, you just don’t know where you’re going to go.”

Watercolor is like layers, she said. You can dab in a color, mix it up, move the card around and spread out the stains. And while the watery paint dries on one card, you can start working on the next piece.

Some students like to stay representational. Bailey said her goal is to loosen them up — and they need it.

“It leaves you in places that you just never knew you were going,” she said, “and then with watercolor, you start light and you go to dark.”

Bailey has heard some artists recommend others turn their painting upside down, she said, “because then you’re looking at how you’re filling space instead of looking at objects.”

She said when they paint as a group, it’s like painting-by-committee because they critique each other.

“When you’re involved with something, you lose your perspective,” Bailey said.

Bailey provided liquid frisket to the class, which is a blocking agent that can be painted over to create outlines. She said the idea of resistant fluid is to put other colors over each other to highlight them.

“You don’t know what the results will be like,” she said.

Part of the co-op’s namesake of making art accessible is to keep it inexpensive. Bailey explained that they used to offer classes to special needs adults and children, but they’ve expanded their reach since the pandemic.

“We have fine art here,” she said. “But we are perhaps the only gallery that that does crafts along with with fine art.”

Bloomington’s Terry Brown was there to try something new, and painted a Snow Flower. She used the frisket to draw out teardrops on one card, and then tried a different technique on the next she liked better.

“Each one, I’m learning something different,” Brown said.

Now retired, she said she also decorates cakes and wanted to see what new ways she could bring over from watercolor.

Kristin Paul, also of Bloomington, was there to learn watercolor too. She said she knew she wanted to stick with more reds and greens for her flowers, so she decided on blues and purples for the background. Paul also added some green — inspired by her table-mate, Babs Allen, and threw in some orange for contrast.

“So my main goal was not to make mud,” she said, “and I started to get a little muddy in places, but not bad.”

Paul said as a crafter, she does similar things with different materials, but this was her first time with watercolors.

“It’s awesome to learn new things,” she said, adding she always wants to do that.

Sean-Thomas Gunnell was another student there Sunday. He said he already does portraits and commissions for folks, and he’s wishing to get more into watercolor.

The floral he chose for his prints’ subjects were Black-Eyed Susans, Calla lily and Irises.

The art instructor said their gallery is like a community, and they want to keep that great.

“If you don’t have community — what do you have?” Bailey asked.

Illinois Prairie Community Foundation awarded a 2021 Mirza/Arts & Culture Grant to the Inside Out Accessible Art for Art Education.

Top Photo Caption: Terry Brown of Bloomington learns how to watercolor at a class offered by the Inside Out Accessible Art Cooperative in downtown Bloomington.