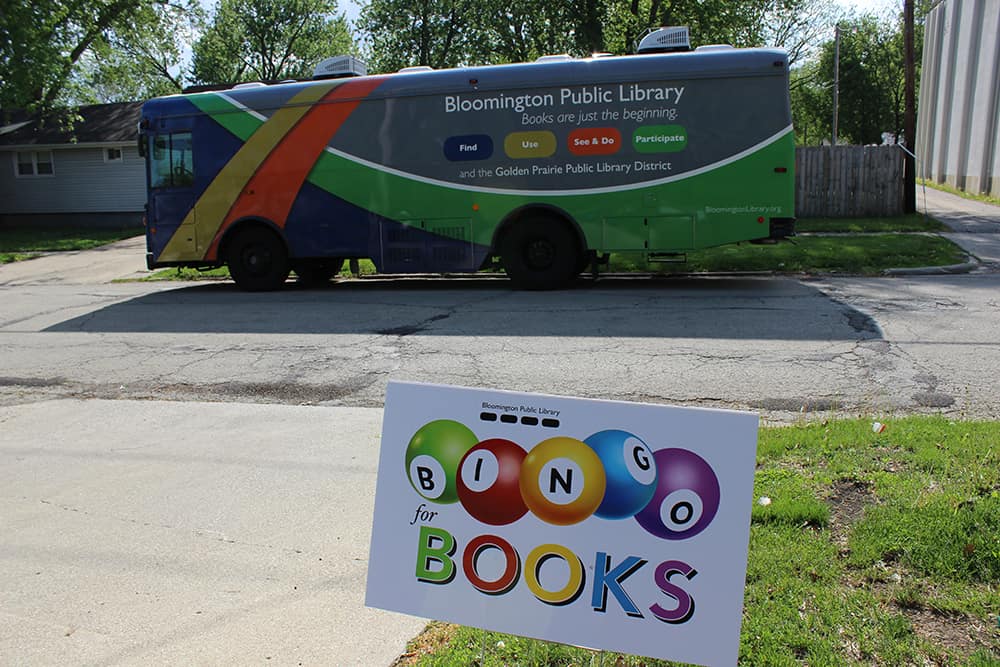 With the goal of improving literacy and providing more access to books for children on Bloomington’s west side, the Bloomington Public Library hosted a Bingo for Books! event at Western Avenue Community Center on May 9. The library received a General Grant for Education from IPCF for $500 to fund the event. 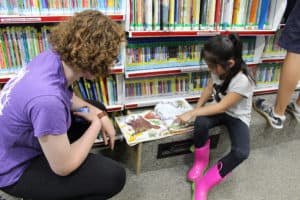 A Bloomington Public Library staff member looks at a book from the Bookmobile with a youngster in Western Avenue Community Center’s after-school program.

It was the first time on the mobile library for most of the children. Cries of “Wow!” and “Cool!” were heard as more than 30 children toured the Bookmobile. They were excited to find some of their favorite books onboard.

The children were encouraged to get library cards of their own with their parents and guardians although Western Avenue Community Center is working with the library to secure a corporate account so children in the after-school program can check out books through WACC.

The community center will make visiting the Bookmobile a regular part of its after-school program’s schedule with tutors accompanying children on the library on wheels. “While the goal is to increase attendance numbers at the stop,” said Paula Wager, library assistant, “we want to see more parents bringing on their kids overall.” 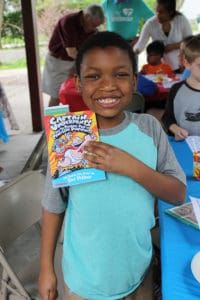 A participant in the Bingo for Books! program proudly displays the book he won at the event.

After learning what the library could offer them through the Bookmobile, the children visited the park across the street from the center for pizza and snacks before the bingo began. After calling letters and numbers for many minutes, finally the first shout of “Bingo!” was heard.

The first winner proudly approached a picnic table laden with books from Scholastic Books and picked a favorite. Play continued so more winners could pick out a book, with all children eventually winning one free book. Among the favorite books were “Captain Underpants,” “Junie B. Jones” and the “I Survived” series. Also available were many books in Spanish for children for whom Spanish is their primary language.

Children from the community center weren’t the only ones visiting the Bookmobile that day. Jim and Julie Thorpe came aboard to check out some movies. Julie volunteers at a senior exercise program at the center. While they currently live near White Oak Park, the Thorpes have been involved with the Community Center for years, first as children in the neighborhood and later with their own children. 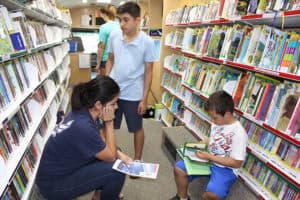 Teresea Enyeart of Bloomington visits the Bookmobile with her sons.

Teresea Enyeart of Bloomington toured the Bookmobile with her two sons. Richie, age 12, volunteers with kitchen clean-up at the community center after school. While Richie had toured on the Bookmobile before, neither his mother nor his brother had. “This is a great idea,” Teresea said of bringing the bus to the center.

Wager said the Bookmobile stop at Western Avenue Community Center was added within the last year. Usually when a new stop is added, drivers hear “we didn’t know what this was” from people who have never seen a Bookmobile. She hopes she hears that less now that more children and parents have seen the mobile library outside the community center.