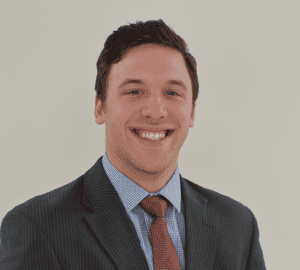 Ben McAllister was a vibrant, active 23-year-old young man living in Minneapolis where he had graduated from the University of St. Thomas in 2014. He was working for a young start-up financial company (Core Income) that was growing rapidly. He was intelligent, athletic, and handsome; and his friendly, likable demeanor was unmistakable to all he met and befriended.

During a visit to his hometown of Bloomington, he was taken to a local hospital complaining of severe pain in his lower back. Upon discovering a very large mass on his kidney, he was immediately admitted to the University of Chicago and within a week was diagnosed with a very rare kidney cancer – Translocational Renal Cell Carcinoma.

Dr. Peter O’Donnell met with Ben and his family to learn about how rare this cancer was – less than 200 cases ever reported. Ben began treatment under the care of Dr. O’Donnell to combat tumor growth within the kidney and the metastasized areas of the lymph nodes and chest.

After two months of living at home, Ben made the decision to return to work and live in Minneapolis where he continued various chemotherapy and radiation treatments for over 6 months. He so wanted his life to be as normal as possible in spite of this Stage IV cancer that was raging inside of him. Unfortunately, there was no treatment that could slow down this cancer – he ultimately began immunotherapy in July 2016, but it proved to be unsuccessful as well to slow down this powerful cancer.

Benjamin lost his battle on Sept. 12, 2016, only 10 short months after being diagnosed. He remained strong and positive throughout and chose to live out his life among friends and family. He did not want to be defined by his cancer. Ben lived his life actually as if he knew it would end far too soon. We could all learn so much from knowing Ben or even hearing his story. He was always having fun, making people laugh, and knew how to fully enjoy each moment. He would never pass up a good meal, a good drink, or a good time. And most of all, he never took his relationships with his family and friends for granted. He loved above all else.

The Benjammin Bash was created to not only help raise money for the Benjamin McAllister Scholarships, but to also all come together in the spirit of Ben and enjoy good food, good drinks, good friends, and of course some rockin’ music (Ben’s favorite things). The 2022 Benjammin Bash will be from 3-7 p.m. Sunday, May 29, at Lil Beaver Brewery in Bloomington. More about Benjammin Bash or view 2022 Benjammin Bash flyer.

The hope is through these scholarships, the young minds in the University of Chicago Medical community will someday be able to discover a way to allow a young person like Ben to continue to live a longer and healthier life.

Illinois Prairie Community Foundation serves as fiscal sponsor for Benjammin Bash. If you would like to make an online donation to Benjammin Bash, please click on the Donate button below. If you prefer to make a donation in another manner, click here for information.