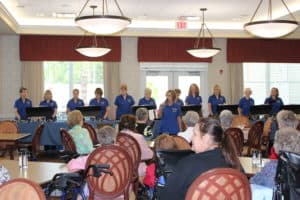 The 3-year-old group’s 12 members share a joy of ringing. Directed by retired District 87 music teacher Sue Miller, they are all lifelong learners and enjoy the ability to teach their audiences while also sharing their love of music.

That was evident at Luther Oaks senior living center in Bloomington. Miller told short stories before each piece, explaining about the song, composer or instruments used to play the music. The musical selection at Luther Oaks ranged from religious to classical, folk to more recent pop songs (see song list below).

Throughout the performance, the women rang handbells and swung the choirchimes (which look similar to staplers), sometimes using both instruments in the same song. The last song involved no ringing as the musicians picked up mallets and used the bells xylophone-style, much to the audience’s enjoyment. 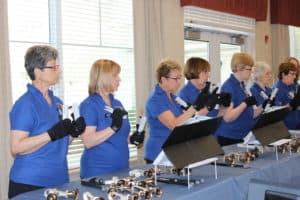 Musicians use choirchimes to perform a song

During one break between songs, Miller told the audience about the choirchimes. “Composers use a blend of handbells with choirchimes for optimum performance of their compositions,” she said. “Before this, we did not have a complete set.”

Last year, the Community Bells borrowed choirchimes from another group, but returned them to avoid wearing out another’s instruments. In October 2017, they applied for a grant from IPCF, their first foray into grant application, and received $1,255 to purchase two octaves of choir chimes.

“The people at Illinois Prairie Community Foundation and the Arts & Culture Grant Committee recognized our passion and vision for the future of this program,” said Miller. “We are blessed that they agreed with our vision and agreed to help us buy the choirchimes.” Now the Community Bells has a full complement of four octaves of handbells and three octaves of choirchimes. 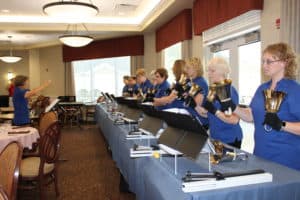 “I shared with IPCF via an email,” Miller told the audience, “about how I was standing in my front yard when I got notification that we had received the grant and I squealed with joy! We have been truly blessed to get this grant.”

While $1,255 might not seem like a lot of money in the world of grants, it has meant the world to the Bloomington-Normal Community Bells and in turn, their audiences. Those in attendance at Luther Oaks were enthusiastic about the music and happy to hear that the Community Bells would be returning to play more in the future.

Last year the Community Bells performed at 31 events ranging from senior centers to organizations, both private and public. Recognizing that music’s lifelong learning starts young, Miller said they love when they see children’s eyes light up as they recognize a familiar tune. After programs, the musicians carefully help children ring a bell. “They are the choirs of the future,” said Miller. 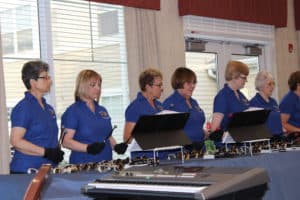 Performers use mallets with their handbells

After their performance at Luther Oaks, a woman in the audience came up to Miller and thanked her for mentioning the Laura Sullivan Arts & Culture Endowment Fund. The audience member had worked with Sullivan at State Farm; she told Miller how well-respected Sullivan was and how she would have been pleased to know the Fund was helping programs in the community like the Bloomington-Normal Community Bells. The audience member then mentioned that she and her husband were considering how to divide up their assets and she was pleased to learn about the fund at Illinois Prairie Community Foundation.

“The endowment and this grant have so many avenues of goodness,” said Miller, “not just for us and the audience, but it’s the whole package.”

If you would like to help fund more events like this in the community, please donate to the IPCF Annual Campaign which funds the General Grants or donate to a specific fund at IPCF.