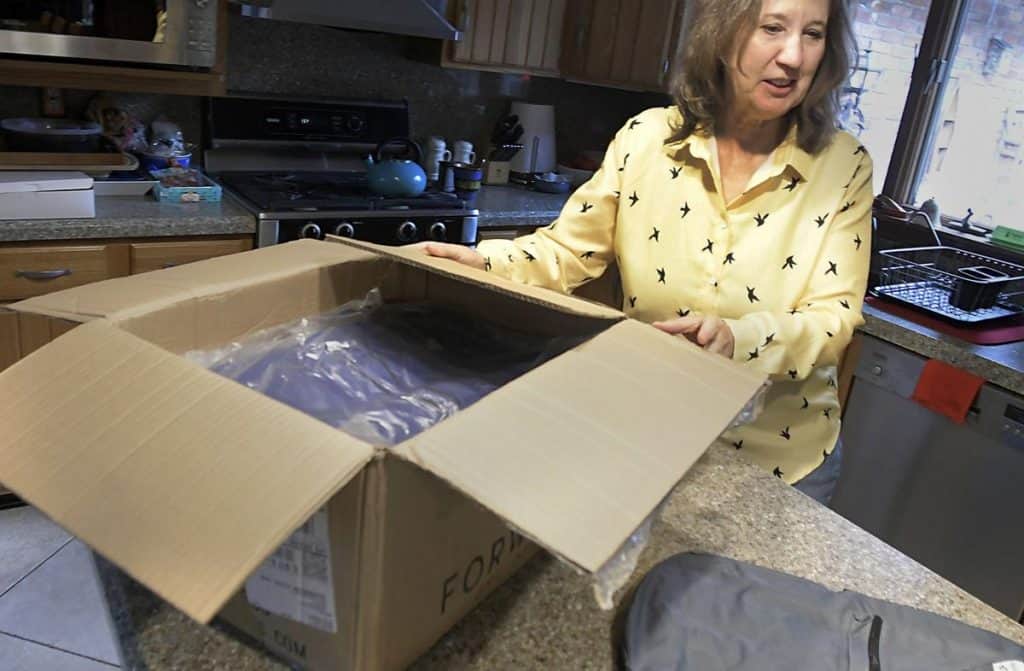 Working for the Illinois Department of Child and Family Services, it was her job to help kids get out of abusive and neglectful households. Sometimes it would be six children at a time.

In those heart-wrenching moments, they had few options for transporting belongings.

“As an investigator for 20 plus years, time and time again I saw kids placing their belongings in garbage bags,” Beguin said. “Over those years, I knew there had to be a better way.”

Anyone can make a report to the Illinois DCFS hotlines at any time of the day or week. At the time of that report, the agency opens a case and sends an investigator to interview the family and child to determine the risk to that child.

If the risk is imminent danger by leaving the child in the home, the child is removed and placed into a licensed foster care home or with a relative.

“It’s at that point the investigator asks that child typically to gather their belongings, and without a backpack, they go into a garbage bag,” Beguin said.

Working as an investigator, Beguin faced difficult situations in which children were often taken out of their home the day of the initiated DCFS investigation.

“I would have a situation where a kid and he’s putting his stuff literally in a garbage bag,” she said, adding that she would think, “There’s so much wrong with this already.”

When a child is removed from a home, they are often experiencing an incredibly emotional psychological event in their lives, said Dan Duback, Beguin’s husband.

The act of placing their belongings in a garbage bag could lead to negatively associating themselves with the item, leading to thoughts such as, “I’m worth trash,” or “My stuff is trash,” he said.

Beguin began purchasing out-of-pocket backpacks from dollar stores to have on hand long before her retirement.

If she was ever placed in a situation where a child was going to be removed from the home, she would provide a plain colored bag for the child to pack their clothes, toothbrush or any other personal items they would need.

In 2013, well into her retirement, Beguin could not stop thinking about the children she helped during her time with DCFS. Without an organization to donate funds or backpacks to, Beguin and her husband decided it was time to do something about the issue.

Partnered with Illinois Prairie Community Foundation, the organization seeks to lessen some of the negative emotions children face when they are removed from their home and placed into foster care.

On average, 5,000 Illinois children are placed into foster care, said Duback. Fostering Dignity seeks to supply a backpack for each child who needs one. A $5 donation allows the organization to purchase one backpack to supply DCFS with.

This year Fostering Dignity has donated 1,600 backpacks to DCFS offices across the state.

While it is unlikely Beguin and Duback will ever hear from a recipient of a backpack, she said she has spoken with former foster children and parents at festivals or street fairs to raise awareness of the organization.

During those festivals, Beguin said she has had people tell her “I remember the day I put my belongings in a garbage bag” and break down in tears when they learn about the program.

“They’re already in a difficult period in time in their life, so why add that to the problems that they’re experiencing?” Duback said. “Since it’s an invisible population, it’s hard to say if it makes an impact, but the effort is worth it to try to help and somehow give them a little comfort in a time of need.”

Illinois Prairie Community Foundation serves as fiscal sponsor for Fostering Dignity. If you would like to support this effort to help children in need, please donate online. If you prefer to make a donation in another manner, click here for information.